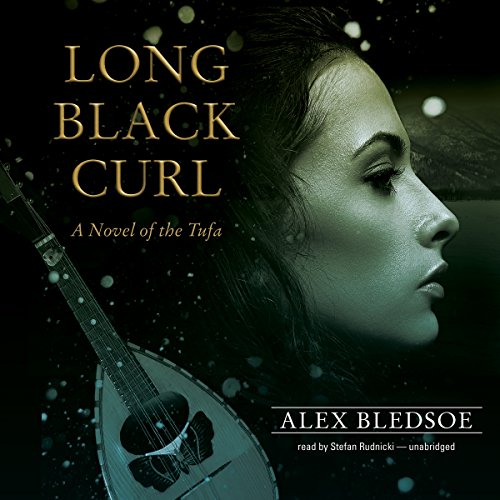 By: Alex Bledsoe
Narrated by: Stefan Rudnicki
Try for $0.00

Long Black Curl is the latest installment in Alex Bledsoe's acclaimed urban fantasy series, where magic is hidden in plain sight and age-old rivalries simmer just beneath the surface.

In all the time the Tufa have existed, only two have ever been exiled: Bo-Kate Wisby and her lover, Jefferson Powell. They were cast out, stripped of their ability to make music, and cursed to never be able to find their way back to Needsville. Their crime? A love that crossed the boundary of the two Tufa tribes, resulting in the deaths of several people.

Somehow, Bo-Kate has found her way back. She intends to take over both tribes, which means eliminating both Rockhouse Hicks and Mandalay Harris. Bo-Kate has a secret weapon: Byron Harley, a rockabilly singer known as the "Hillbilly Hercules" for his immense size and strength, who has passed the last 60 years trapped in a bubble of faery time. He's ready to take revenge on any Tufa he finds.

The only one who can stop Bo-Kate is Jefferson. Released from the curse and summoned back to Cloud County, even he isn't sure what will happen when they finally meet. Will he fall in love with her again? Will he join her on her quest to unite the Tufa under her rule? Or will he have to sacrifice himself to save the people who once banished him?

Our Tufa Returns ( in more ways than one!)

If you could sum up Long Black Curl in three words, what would they be?

Bittersweet, well crafted and a worthy continuation of the story.

Alex Bledsoe has created a backwoods mix of magic, fairy lore and modern day realism in his Tufa novels. It feels inviting and real enough that you might want to crawl between the pages and live there for a while - but only if your pure Tufa!

With his caramelized voice and perfect intonations, Mr. Rudnicki seamlessly melds his performance with the story. His British accent flawless, his Appalachian tones spot on and consistent with his other readings of the 2 previous books.

Hard to say with out sending out a spoiler alert! The death of a main character was a mixed bag of shock, justification and Cheshire cat grin!

I felt that that this book was more sex and F-bomb laced than the other two. That detracted from the pure enjoyment of visiting Needsville again. That said, the ending left wide open another novel from Mr. Bledsoe, and I can hardly wait.

The whole book felt disjointed, as though the author couldn't get comfortable with what he was writing. There were at least 17 or 18 different plots that made an appearance and at the end everything wrapped up in a neat little bow by killing off all the characters so The author didn't have to think of a way to end it. The ending just felt slimy. I'm really disappointed because I really enjoyed the first novel in the series as well as wisp of a thing, but this one was just really poor.

I don’t know what it is. There’s plenty of stuff that bugs me in the moment and it just doesn’t matter. These books are wonderful and magical in all the best ways. Their flaws feel like part of the beauty. It all feels like an old fairy tale in the very best way.

To much murdering, and twisted people. Not to mention the racism in this book. Only good thing about this one is that it wasn't filled with incest like the prior book. I definitely would not pay for these books. I get them free with my Audible membership. I don't appreciate that they did a spin off of the Melungeons and turned them into despicable people!

I know that band!

I know Danny and the band! I've bought 2 albums and been to a few of their concerts!

I love this series my only complaint is that audible does not have the entire series in their collection. It is a great story of revenge and love.

I read the first two Tufa books, and loved them. When Audible added the series to the Plus collection, I eagerly started listening.

This narrator is not just bad, overall, but how could anyone choose him for such a musical, lyrical set of books? He cannot voice women (they sound like wheezy stereotypical trans women trying to speak like a woman) and he doesn't even attempt to sing. And why would you pick a guy who can't voice women to voice a book with so very many women characters???

He ruined the book. It's really very upsetting.

Still, the narration is terrible. Unbelievable. Nigel's accent sounded like some stuffy old English aristocrat. And once again, people who didn't have accents got one, those that did, occasionally lost it. Pssst: Luke Daniels.

There’s no way my review will ever do this book justice. There are no words good enough to describe the beauty of it but I will try. Just like how the music in the story comes alive and is magical, so is this book. All books touch the heart in ways but rarely do they touch the soul. This author has the ability to do just that. The faeries in this book aren’t shiny like the pretty baubles in my favorite genre of Urban Fantasy. No, this is more like an urban legend. This is a tale of a people in the mountains of the Appalachia in Tennessee. The Tufa are a shy secretive people. It’s been said that they were here before the Indians. They mind their own business and stay untouched by the outside world for the most. You won’t find them on any map, and if you hear stories of them and try to find their town, you won’t be able to. Only if the night winds allow it. One would think they were just another bunch of rednecks growing up in the mountains. But there’s magic and power in them. Power for the good mostly. But sometimes people start out selfish and greedy. Thinking only of themselves. This is what happens with one young lady from Needsville, Tennessee. She was born Tufa. At a young age her and her boyfriend were like poison to the town. They did unspeakable things and were banished for good, never to find their way back. Or so they thought. As time went on, the young lady only grew more bitter and filled with more rage. Always longing for the place she was from and the magic. One day she shows back up, back to take what she believes is rightfully hers. She is back to be the leader. What she leaves in her wake is nothing but tragedy, one after another. I cried during sone of it because it felt so real. This author’s characters are so real from the first chapter. This is a tale of how the Tufa set out to stop the woman. I rooted for them all the way. This series is so epic! It should be part of literature for college. Right up there with The Iliad. It’s a classic. It puts me in the mind of Neil Gaiman but still the most original work. A masterpiece. I loved how the band from Tutha Da Danaan (spelling)Pigeon Forge, Tennessee was in the book at the end. They wrote and perform the songs that go with these books. That’s something to experience. It sends the shivers up my arms, just like the title of the first book. I read this book second. I had the second one and was going to read it but needed an audiobook so I got the third. It makes sense reading it that way but there is so much I missed that happened to characters in the second. Throughout the series, the same characters will be in it. It appears that characters from the outside world are introduced and the affect the Tufa leave on them. They are never the same.

If you never listen to but one audiobook in life, this series should be the one. I could see a movie of it playing in my head. The narrator was perfect! I really wish this series and author were advertised more. But it appears the author is a humble man who is as aloof as Rockhouse Hicks in his books. Hope you guys read this series. You won’t regret it.

Tufa fans will love it!

For all the Tufa fans you will love this story! Especially the end!
Forbidden love, internal and external war... Everything in one book!