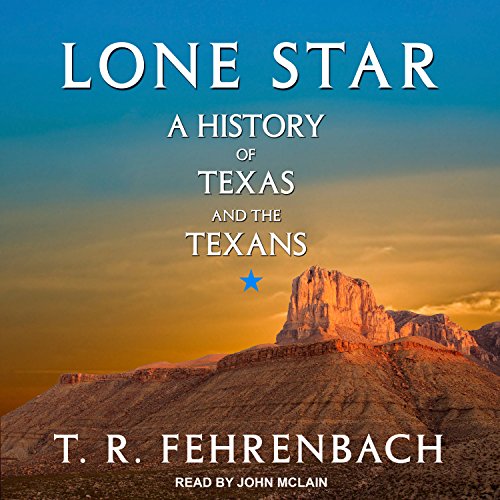 Here is a must-listen history of the Lone Star State, together with an insider's look at the people, politics, and events that have shaped Texas from the beginning right up to our days. Never before has the story been told with more vitality and immediacy. Fehrenbach re-creates the Texas saga from prehistory to the Spanish and French invasions to the heyday of the cotton and cattle empires. He dramatically describes the emergence of Texas as a republic, the vote for secession before the Civil War, and the state's readmission to the Union after the War. In the 20th century oil would emerge as an important economic resource and social change would come. But Texas would remain unmistakably Texas, because Texans "have been made different by the crucible of history; they think and act in different ways, according to the history that shaped their hearts and minds."

What listeners say about Lone Star

The guy reading this book sounds just like the dramatic Top 10 guy on Youtube. The book is good, I just can't listen to the narrator.

Narrator is painful to listen to - ruined book

The man apparently has never heard most of the proper nouns in the book. He doesn't come close to the French, Spanish, and Native American words, and makes an otherwise interesting story too painful to listen to.

I read this book 30+ years ago and looked forward to listening to the updated version only to find I can't stand to hear another word out of this man's mouth. I am sadly returning it after only a couple hours of listening.

Read to book. Don't waste your $$ or credits on the audible version.

This book is about a lot more than Texas. Fehrenbach tells a history of colonization in North America from about 1500 onward. The emphasis on Texas is interesting because it was a boundary area where Spanish, Anglo-Celtic, and Amerind cultures fought it out (not being a history buff, this book gave me a much better understanding of terms like Amerind and Anglo-Celtic). All the races had strengths, made mistakes, and had the great courage required to live on a frontier. All the people lived in an environment where decisions were often made based on how to kill or avoid being killed. In my mind, the phrase "Remember the Alamo" has been replaced by "Remember Texas"--rather than remembering a single battle, this book fills in a story that took place over centuries.

If you're proud to be a Texan, this is a must read

The book is well researched and extremely detailed. Even in the midst of painstaking attention to every nuance, it maintains a pace and excitement that will keep you listening. It is great to listen to a book that isn't boring and monotonous, like so many. The voice used inflection and even accents to help the stories flow.

What a story! Definitely makes you proud to be Texan if you are one!

This book will help you understand why students in Texas learn their state history in 4th grade and 7th grade; and if you were like me and experienced that, you’ll reflect with fond memories as you listen...

Much of this book may not be suitable for 4th or 7th graders, but it is very important to know your history - even, and maybe especially state history... or you’ll be doomed to repeat it!

Very informative, since being a Texan, good to know the historical facts about Texas. Information about the area I live in explains a lot of what went on then and even now.

Rich with depth and an incredible story

The book should be required reading and every Texas school. Toast the story of this incredible state, it’s rich history, and all of the cast of characters who made Texas what it is today.

The narrator is just horrible

Sounds like I'm listening to a bad actor. No idea how the actual book is because the narration is just plain bad.

The narrator’s voice is professional sounding, but he speaks as though reading a newscast, almost mechanical. For that reason, I doubt I can keep listening to the book.

A real tour de force that brooks no condescending virtue signaling or PC revisionism- so nauseating common amongst the self-styled arbiters of hindsight morality. Instead, Fehrenbach tells the story - take it or leave it - without agenda or Monday Morning quarterbacking, while simultaneously, albeit perhaps unintentionally, skewering those who from armchairs of intellectual “superiority” will never see the forest for their own ill-planted shrubbery. A TREMENDOUS HISTORY of a tremendous people and state.