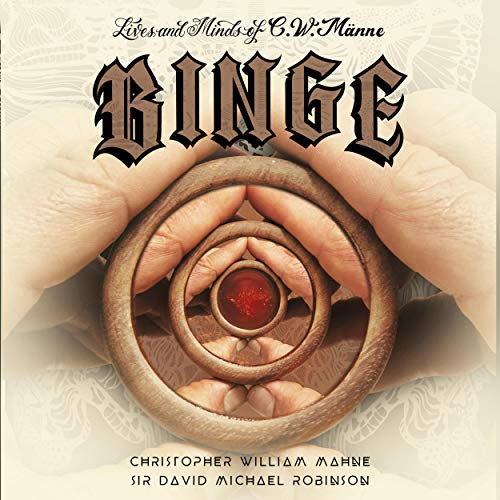 A magical and suspenseful tale of forgiveness on the path to spiritual consciousness.

“You will need a rosary, a dictionary, and a safe word...”

Follow the adventures of C.W. Männe in this hypnotizing literary suspense thriller of rebirth and the teachings of Ayahuasca.

This real-life inspired story begins with our main character C.W. dying in a hospital bed when his Shaman, Anunk, arrives and gets rid of everyone. The Shaman retrieves a thermos and small wooden cup lights an enormous cigar and begins chanting and building a great broom of smoke over the dying C.W.

C.W. then awakens from deep sleep into what appears to be a dream; he feels a sharpness in his throat, which he can’t relieve. Finally, as his body is shutting down because of a lack of oxygen, he realizes that he is not in the midst of a night terror but the worst of all possibilities, he has been buried alive.

As he frees himself from his grave, desperately trying to figure out where he is and what has happened, he finds himself in a technicolor version of the Amazon rainforest. Here, he will learn that nothing is what it seems, and messages are hidden in every corner of this mysterious jungle labyrinth.

He will soon realize that he has entered a surreal world filled with signs and symbolisms of his entire life, where he will experience the most powerful magic and be hunted by unknown mysterious forces. However, nothing comes without a fight on his path to meet death, acceptance, self-discovery, Pachamama, and most importantly, forgiveness on his path of spiritual consciousness.

What listeners say about Lives & Minds of C.W. Männe: BINGE

I really was surprised by this book. I only read non fiction. But because I am becoming involved in the shaman community I was told to read this.

It inspired me to think of it as a real life application of the book The Art of Being and Becoming by Hazrat Inayat Khan.

So much spirituality and humanness. Plus the writing is “sensational”. It literally touches so many sensations. I was moved and captivated every second. I couldn’t turn it off.

Congratulations to the authorship and to the performance. WELL DONE!!!

Augmenting my review after listening to the audible version !

I first read Lives & Minds of C.W. Manne :BINGE by Christopher William Mahne andnd Sir David Michael Robinson and I was immediately hooked by the many levels this book has taken me. I enjoyed hearing the audible for it made me have great visuals of this book. I recommend anyone that is looking for a journey and has a creative mind of self discovery and openness to plant medicine.

I got so inspired for this! the whole story is very good and interesting. 100% recommended, tropical psychedelic stories are the best!

What a ride, I will definitely drink from the cup

This book was beyond beautiful. Not only did I read it, but I found the voice of the storyteller so mesmerizing I decided to listen to it as well.
I am always looking for books, stories, or lessons formulated from an honest hard look at their own life. A takeaway that leaves me breathless for even a moment is a gem, and I found that here in this incredible tale.
It is rare to find a fantastic story that pushes my beliefs' boundaries and takes me for a ride. Binge and the mesmerizing tale that is expressed, for me, was precisely that union of disbelief comingled with the hope that it will deliver a message worthy of my time.
I got so lost in the story that time flew by, and I found each chapter mindblowing. I was totally consumed by the characters and their relationships. It pulls you into the world of plant medicine and the limitless possibilities for healing. I can say, from a plant medicine perspective, I was tested several times on both judgment and my lack of openness. I stuck to the end, was delivered from both, and found places within myself that I didn't realize existed.
I hope that there many more to come.. This was a journey!

A true story of change and perspective!

The audiobook version was a great story to daydream every time I wanted to unplug and connect!

Looking forward to more content on the book. Def something I picture in a film or illustrations!