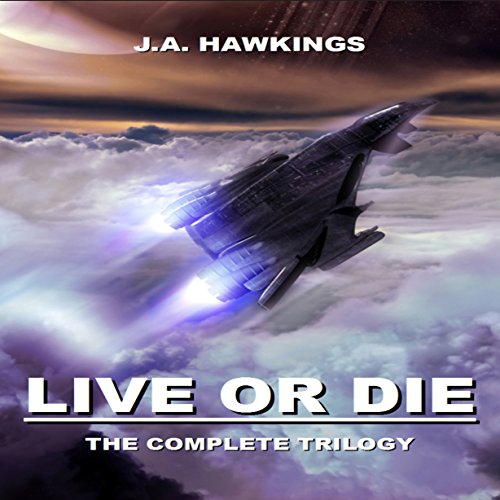 Live or Die: The Complete Trilogy

Live or Die: The Complete Trilogy

By: J.A. Hawkings
Narrated by: Marcio Catalano
Free with a 30-day trial

This edition is the complete trilogy of Live or Die.

The aliens have arrived!

Their first message is one of peace, but can they be trusted?

This is the story of the first contact between humanity and the civilization of another world, with all of the uncertainty, questions, deceptions, curiosity, fears, and ethical problems that it raises. But it is also the story of a huge spaceship in orbit around the Earth; and the diary of a government agent whose mission is to thwart the alien conquest.

The plot revolves around artificially intelligent beings, nuclear threats, virtual simulations, the mysterious origins of an alien civilization and government agents whose lives hang by a thread. The inescapable fate of the human race will be shaped by these, along with the power of love between a man and a woman.

What if, for a moment, the fate of the Earth was in the hands of a single individual?

What if the survival of one person could upset the future of two worlds?

And what if dying was preferable to living?

What listeners say about Live or Die: The Complete Trilogy

Very Unique ~ Unlike Any Sci-Fi I've Listened too!

I love a good Sci-Fi, but I'll admit this story is unlike any typical Sci-Fi I'm used to reading. It wasn't really a Sci-Fi opera or even a military Sci-Fi; however, overall I did like it, and think if you a true fan of Sci-Fi, then you will probably enjoy this trilogy.

Looking over other the reviews, it appears there were several comments about book one. Book one it's told in six parts but the first two are very different.

Part 1 - Diary format following characters that were placed underground from June 3 to September 11th and during this time earth is invaded by aliens. Two of the main characters Siroio and Namiko start develop a relationship and communicate by video.

Part II - Is told from the spaceship Alpha Orionis on-board log which details the most recent events but is mainly in a code like format - very different.

Part III - IV This is where the book starts to pull together the events from part I and II and becomes more like your typical story telling. By the end of book one, earth has been invaded and suffered a lot of human losses and these losses were a result of an error from one of the alien races on the spaceship Alpha Orionis. They've assisted earth with rebuilding.

Siroio and Namiko have fallen in love and moved in together; however, due to a medical condition Namiko is in a comma and her outlook is very grim. The first officer, Eldgh, on the Alpha Orionis offers to save Namiko by sneaking her onboard their ship when they leave earth, but she will the only person allowed to leave. Siroio agrees for Namiko to leave so she can be saved.

There's a lot going on in the story and the plot is full of kinds of twist. Book two picks but by book three, I was really into the story. I loved and hated the ending.... in a good way. :-)

I noticed there were mixed reviews on the narrator; however, I think he did an awesome job. Since this story is told from multiple alien races, he used a voice that you would associate with a logical thinking alien being. In my copy of the audiobook, there were many repeats, where you could hear a finger snapping sound, and that segment would be repeated. This may be annoying to some but showed me how hard the narrator worked to perfect the narration.

I was torn between giving the story a three or four star. Ultimately, I settled on three stars for the story. Overall, I did like the story, but there were times throughout the story, where it just was not holding my attention and I would stop listening and come back to the story later. However, due to the narrators efforts and how the story really came together in book three, I'm giving the book an overall four stars.

This is a story, I don't think would be a good fit for everyone; however, if you enjoy Sci-Fi stories, and are not expecting the typical military or opera Sci-Fi, then you'll want to add this story to your collection of Sci-Fi's because it is a both different and decent. One thing I do not like is for someone to get a story in genre they do not like and then give it a one star.

"I was provided this audiobook at no charge by the author, publisher and/or narrator in exchange for an unbiased review via Audiobook Blast dot com.

Someone forgot to edit the audio

The book? Yes, it's pretty good. This audio recording of it? No.

The story itself is a clever iteration of the alien invasion story.

Yes, it has some good visuals.

Quite a few times throughout the story you will be listening along and suddenly there will be a "click" sound like someone snapping their fingers. The narrator then re-reads the last sentence. These seem to be audio editing prompts that someone forgot to edit out of the final recording. If the audio were properly edited to remove these the audio would be much better.

I liked this book alright, though I didn't like that it was almost entirely in diary form. The main character spends most of the first book trapped in a tiny bunker and becomes progressively whiny. I admittedly didn't read the second or third part of this book, as the first turned me off the series. I got this book in exchange for a review

The aliens have arrived!

If my friend liked this genre, then yes I would. I received this audio book without asking for it, yet I really appreciate the offer, just not my cup of tea.

What was one of the most memorable moments of Live or Die: The Complete Trilogy?

I think the moment I remember most was the scene where the hero had to decide to let his love die or never see her again.

What does Marcio Catalano bring to the story that you wouldn’t experience if you just read the book?

Excellent Narrator!! I could listen to his voice day and night. Many narrators are dull, making me think that they would rather be doing something else and many other narrators are pleasant but not too memorable. I will remember Marcio, he put in 110%. He put so much emotion and "acting" into his voice that it was like watching a movie in my mind.

Was Live or Die: The Complete Trilogy worth the listening time?

After the fact, yes I am glad I listened to it. Not my genre of books that I read.

For the author, narrator, or publisher. I kept hearing a click and the last sentence was repeated. This happened many times, FYI

Narrator gets in the way

The narrator of this book appears to have never heard many of the words he is called on to read here-he pronounces them in a way I have never before encountered. His Australian accent swerves from South African to stuffy-headed SoCal surfer, and you honestly wouldn't know that it is Australian if you weren't told so early in the book.

There are numerous occasions in which the narrator does a second take-both takes are present, separated by what sounds like a finger-snap. He also clears his throat with some regularity.

I am not yet through the story, and don't know whether I will be able to finish it. Although there is some promise, some of the dialogue is stilted and distracting. Overall, it is difficult to sink into this book because of the reader.

Good book. One I will listen to again.

not what i normally read. was good just not my type of book

Not a fan of Alien stories

If you like science fiction this would be a good listen. Narrator speaks clearly and is easy to understand.

Unfortunately this is a poorly edited recording with all the errors in recording still in place - clearly indicated by the narrator but obviously not pre-release edited. This is hardly acceptable for commercial audio production.

The story itself is pretty lame, unfortunately, exacerbated by the bad imitations of national accents.

This one was a disappointment. As an avid SciFi reader, I can't say this one stands out.