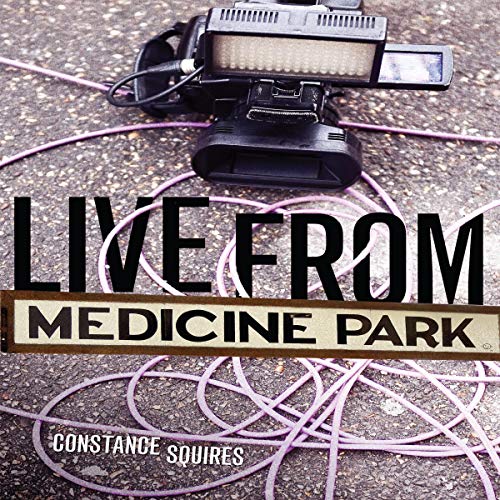 By: Constance Squires
Narrated by: Tom Burka
Try for $0.00

Documentary filmmaker Ray Wheeler is down on his luck. Embroiled in a lawsuit, he is reeling from the consequences of a near-fatal shooting on his last film and has just lost his teaching gig. Broke and beleaguered, he can’t afford to be particular about his next project. So, when a former student invites him to film the comeback of Lena Wells, an iconic rock-and-roll singer who hit it big in the '70s, more than two decades earlier, he reluctantly agrees, even though he doesn’t like her music.

When Ray arrives at Lena’s hometown of Medicine Park, Oklahoma, a defunct resort community, he is determined to approach his topic with the professional detachment that has guided his career. His work ethic is modeled on the prime directive of Star Trek: Never interfere with an alien civilization. But with only five days left before Lena’s comeback concert, Ray quickly runs afoul of his subject, who places him on a one-week probation. The terms: impress her or else...

It doesn’t take long before Ray violates his own ethical standards. Drawn romantically toward Lena, he also fails to prevent himself from interfering with the lives of the people closest to her, including her only son Gram, whose paternity is a mystery even to himself, her daughter-in-law Jettie, and the enigmatic guitar player Cyril Dodge.

When disaster strikes Ray’s set again, this time in Medicine Park, he must face truths he has avoided for too long about love, relationships, and responsibility.

Live from Medicine Park is a bittersweet reflection on the search for identity and purpose amid tragedy. As the novel reaches its climax, Ray sets out on one last adventure to set things right. Redemption may be possible, but only on its own terms.

What listeners say about Live from Medicine Park

Live from Medicine Park is a truly beautifully written story from best-selling and award-winning author Constance Squires and the audiobook version has been released in March 2020, almost three years after its original publication date.

I started listening to Live from Medicine Park without reading the Publisher's Summary and I suggest that you do the same, as I consider that it gives away to much about the plot. All that you need to know is that Live from Medicine Park follows a few really interesting characters. Ray Wheeler is a filmmaker specializing in documentaries who agrees, reluctantly, to shoot the comback concert of Lena Wells, an iconic rock-and-roll singer who hit it big in the '70s. But, can they both pull of such a feat, as the singer was at the top of her game almost two decades ago? As if this wasn't enough, new characters are introduced and things get complicated fast...

The audiobook is brought to life by actor, voice-over artist, narrator, blogger and writer Tom Burka who manages to deliver a great performance. With his voice, cadence and reading style reminiscent of those of the great audiobook industry's legendary Richard Ferrone, Tom Burka was a very inspired choice for this recording.

Sometimes funny, other times tragic, but always entertaining, Live from Medicine Park by Constance Squires was already a great book and now it's even better as an audiobook, thanks to the talent and passion of its narrator! With lifelike characters, vivid locations and a writing style that perfectly mimics non-fiction, this production will appeal to both fans of music and of documentaries alike.

If you liked this review please vote Helpful below and find more of them here and on theAudiobookBlog.
I also post honest reviews at the author, narrator or publisher's request, you can get in touch with me for more details.
Thank you,
Victor

Music and/or Documentary Lovers This Is For You

Live From Medicine Park was one of those books where I had to look up if it was based on a true story or it was just fiction. It was a fictional tale but I'll tell you, it had all the feeling and realism that a real story would have. I truly believe that these characters were real and that their stories were too.

I went into Live From Medicine Park with a completely open mind. I didn't read the entire synopsis since I wanted the book to surprise me.  Squires was able to tell a story that felt so darn real.  Ray Wheeler as a character was one of those real, aka not perfect main characters that goes on his own journey even though he would tell us he's trying to film someone else's. At times during Medicine Park Wheeler wasn't likable. He ran away or didn't accept blame from many of his own problems and he wasn't always the best person. But by the end of the book we're given a chance to see a different Wheeler who has learned a few things along the way.

The story wasn't perfectly buttoned up (not exactly a happy ever after) but it had the vibe. I wasn't sure how Squires was going to finish this one up but I'm glad that she went the route that she did.  It had that "cowboy rides off into the sunset" feel that you got in old Westerns.

Probably one of my only complaints about this book was that it was a bit slow. The storytelling wasn't slow, but the narration was a bit slow.  Tom Burka did a fine job becoming Ray but his pacing was slower than I'm used to (and I listen to a lot of audiobooks).  Thankfully there is the ability to speed the narration up without losing much of the details - so my "complaint" was easily solved.  Other than his pacing, I thought that he did a nice job bringing Squires' story to life.

Overall, a really enjoyable audiobook that caught me off guard. A book I wasn't sure how I was going to feel about. A book that I sat down and finished in one day. One that will stick with, especially since I'm a music lover.  If you like "rock-umenataries" or stories about former rock stars or stories about film-making and filmmakers - Live From Medicine Park will be right up your alley.

The style in which this is written reminds me of Tara Reid Jenkins' (Daisy Jones and the Six and The Seven Husbands of Evelyn Hugo). It felt so real that I actually had to Google Lena Wells! The overwhelming sense of realism would make Live from Medicine Park the perfect introduction into fiction for nonfiction listeners.

The intensity and edginess of 'life on the road' is juxtaposed with the fall out and the decades 0f relative anonymity that followed. We are rather removed from it all, since Ray (the filmmaker) is our window into this life. It took Ray some time to grow on me. He was clearly a fish out of water on the Rock scene and Squires did a fine job of showcasing his growth as a character. His was a story of redemption and that path certainly wasn't easy for him. I really wanted to like him, but he made it a little hard sometimes. As the story progresses and we come to understand Ray's way of thinking a little more, he becomes a more sympathetic figure.

Ray may have been our entry point to the story, but Lena was the star. I've always been a sucker for a strong female lead and Lena was a total badass! She's got this 'been there, done that, and got the T-shirt' attitude that I found completely endearing. I knew I liked her character when she immediately put Ray on notice, giving him a week to impress her or the documentary was off. Yes, she is jaded, but I feel like a former rockstar sort of has to be. She has literally been everywhere and done everything. I know Lena isn't a real figure, but I swear, she felt so real to me that I can practically see her in my mind. She's part Stevie Nicks, part Grace Slick. Music is her passion and that comes across loud and clear, but she doesn't care for the politicking of the music industry. I found that completely believable.

I recommend Live from Medicine Park to anyone who has ever seen "Where Are They Now?" and wanted to know more. I also think this would be a perfect fit for anyone who enjoyed Daisy Jones and the Six.

Narration review: Tom Burka can count me as a fan! His performance thoroughly impressed me, particularly because of his range of character distinction. He has this really rich baritone voice. I was worried that he wouldn't have the range to provide the necessary vocalizations for a number of characters, but I'm so glad I was wrong. We hear from a lot of different characters, each providing various insights into Lena's past, personally and professionally. Burka's character distinctions were all handled flawlessly. I was never in doubt of who was speaking.

I especially enjoyed his Oklahoman accent for Lena. I'm not sure that I could otherwise identify an Oklahoman accent, but the slight twang and flattened vowels he used to voice Lena certainly did the job.