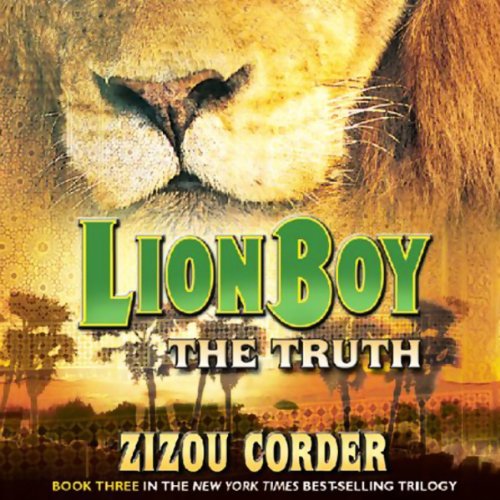 By: Zizou Corder
Narrated by: Simon Jones
Try for $0.00

Charlie Ashanti has restored the lions to their home in the wilds of Morocco. He's been reunited with his parents in an African port town. The boy who speaks Cat is starting to believe that his adventures might be over.

Not likely in a series famous for its "fast-paced cinematic action". The nefarious lion-tamer Maccomo, recently escaped from captivity, kidnaps Charlie with the intention of selling him and Rafi to the Corporacy! A full-scale chase ensues as Charlie's parents, his Venetian gondolier friend, and his ever-faithful lions pursue Maccomo's ship across the sea.

Eventually, the whole cast of the Lionboy trilogy ends up on the Caribbean island where the Corporacy is headquartered. It's up to Charlie to set things right, even at the cost of certain loyalties.

What listeners say about Lionboy

Wow. Really, just wow. I loved this trilogy. It could have tried to end after the second book, but the third really finished the story. The second book did not end as abruptly as the first, so I wasn't left desperately downloading the audiobook, but I was still hooked but the story. The reader, as always, is excellent, capturing a range of accents and characters and leaving me with a decided mental picture of everyone, down to the smallest ship's rat.
A lesson in friendship, loyalty and the importance of independant thought, this series also manages to cover forgiveness and redemtion. Whew! That's quite a bit for such a young-at-heart tale! This book rounds out the story, giving us the closure to the global tale that the personal reunion of book 2 did not. Once again, no one is quite as black/white or good/evil. Even a pretty minor character or two gets a little bit of background - just enough to let you know that there is a person under all that strange or inappropriate behavior. I recommend the whole series to anyone - a great quick read!

I cannot believe that this story is over! I have so enjoyed the trilogy that I sought more works by the two Zizou's immediately upon completing this book. Sadly, there are not yet more tales. I'll be the first in "line" when another tale comes out, although it will be difficult to top Charlie and his adventures :)

Good for kids and adults

I listened to this series with my 9 year old, and we both got very into it. It's definitely alot of fun, and a very different kind of storyline than I'm used to.

This entire lion boy series is one of my absolute personal favorites. I was overjoyed to find it on audible. Wonderful performance.

I enjoyed this story about a very clever little boy that can talk to cats. The narrator did a good job too.

Would you listen to Lionboy again? Why?

I have purchased all three of the Lionboy stories and definitely plan to listen to them all again.

What other book might you compare Lionboy to and why?

This trilogy is a mixture of fantasy and adventure with the important element of great storytelling, perhaps a mixture of CS Lewis and Michael Morpurgo.

What does Simon Jones bring to the story that you wouldn’t experience if you just read the book?

What a great storyteller, he just brings the books to life!

For practical reasons I couldn't listen to it all in one go (too long), but I certainly listened to it within a week.

Highly recommend for both adults and children.