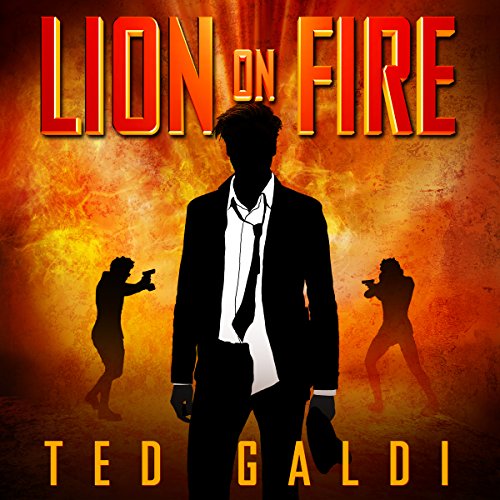 "Sometimes you have to burn your world down before you can live in it."

Brian, a clean-cut recent college grad, takes a side job in an underground casino in New York City to make extra cash to help his derelict brother out of a jam. Nothing goes as planned, and soon, Brian is forced to team up with a charismatic co-worker to rob the mobsters who run the casino.

Lion on Fire is the third book by Ted Galdi, the Amazon number one best-selling author of Elixir and An American Cage. He's been featured by Kirkus magazine, ABC, FOX, iHeartRadio, and many other media outlets.

Main character Brian is shocked to learn that his younger brother not only has been dealing cocaine but foolishly lost a whole package of it, and now owes his boss $30,000. If Brian's brother doesn't come up with the money in a few weeks, he's dead.

Brian decides to help. However, he realizes scrapping together that sort of cash in such a short time frame is nearly impossible legally. So he approaches Dusty, another driver at the limousine company where he works, and asks him about the whispers of lucrative yet illegal side jobs he's heard among the staff.

After proving himself trustworthy with an initiation test, Brian is invited to participate in an underground driving network that shuttles wealthy individuals to extravagant, though illicit, gambling events set up in multi-million-dollar Manhattan penthouses.

At first things go smoothly, and Brian pockets a lot of much-needed extra income. However, they turn jarring once he finds out a high-profile Russian gangster is behind the gambling events and becomes mixed up with him not only professionally but personally.

With tensions rising, and the fate of Brian's relationships with his parents and girlfriend now entangled with the underground casino, not to mention the life of his brother, he winds up in a position where pulling off a mafia robbery may be his only chance to get himself and his loved ones out of this mess alive and intact.

What listeners say about Lion on Fire

This story has a slow burn to it. Brian Rolson starts off as a good, but naive, fellow who is helping his younger brother Kip out. Their State Trooper dad has strict high expectations of both his sons and Kip has already had a mark against him. Now he’s gotten involved with some drug gangs and owes them $18k, which he can’t possibly pay off in time without help. So Brian, who’s been a limo driver for a while now, agrees to take up driving for this illicit casino business. Manhattan has strict rules about casinos but the Russian Mob has ways around them.

As the story unfolds, we get a few more characters, like Dusty who becomes Brian’s good best buddy in this illicit casino business. Then there’s Brian’s girlfriend (Samantha? maybe?) who reluctantly gets dragged into this and then unceremoniously kicked out. That spurs our duo on to what becomes a big flustercluck.

Igor is the Mobster that Brian has the most dealings with. He is calm, concentrated, and scary! One of my favorite scenes is where Igor, Samantha, and Brian are all crammed into a car having a heated discussion. It was intense and I wasn’t sure everyone was going to make it out of that car alive.

Dusty is lovable because he’s almost a Puck – so care free and full of life. He’s got this philosophy that you should take chances, live that life to the fullest, because death comes in an instant and then you’re not around to deal with any messy clean up (physically or emotionally). Brian isn’t sure he buys into that but it does intrigue him.

As wrapped up as I was in this tale, I did miss the ladies. There’s a brief appearance of Brian’s mom, a woman who runs the little bank at the casino events, and Samantha (plus some bar ladies and gamblers). Samantha has the most lines but she’s mostly there to provide emotional fuel for Brian and Dusty to hatch their plan. She hasn’t got a full personality like Brian or Dusty. So I would have liked more ladies and more from them.

I liked the underlying role of Brian’s dad. His strong expectations from his kids motivate Brian just as much as that event with Samantha. Both sons feel that they can’t go to their dad for help or guidance because they will forever be labeled Mess-Ups, never to crawl out from that black cloud.

While the heist attempt itself was full of riveting scenes, I could see all sorts of issues with their plan leading up to the attempt. Why oh why! Boys! So many ways for things to go wrong and for it to end in tears. But the ending was full of suspense and action, kept me hooked, and on the edge of my seat. 4.5/5 stars.

I received a free copy of this book. My opinions are wholly my own.

The Narration: Scott R. Pollak did a great job with this narration. He had the perfect voice for Brian, who is naive and a little too helpful to everyone. He’s eager to please. Then he also had the perfect care-free voice for Dusty. I also liked his strong, unforgiving voice for Brian’s dad (the state trooper). His few female voices were feminine. The pacing was perfect. There were no technical issues with this recording. 5/5 stars.

Lion on Fire is an entertaining book about a young limo driver who gets mixed up with an underground gambling ring and the Russian mafia. The story has plenty of action to keep the reader's (or listener's) attention. The narrator does a terrific job bringing the story to life.

Sons of a cop. One good. One not so good. Good one comes to the rescue of the bad one. Overall a decent story. Some twists and turns. A few cheesy fights. The finish is satisfying and I recommend this quick, very descriptive story if yuh like a decent heist thriller.

Well developed characters in a intriguing storyline. Recommend book and narration at the same time so you can take it on the go. Plan to seek out the rest of his work!

This book is a sure fire hit

I enjoyed this book and even through it was quite short I listened to it all in one sitting as I didn't want to stop.

It shows how easily a life can suddenly change direction. By trying to help his baby brother out of a difficult situation Brian find himself inhabiting the life he is trying to save his brother from. If you need big amounts of money in a quick amount of time where else do you go but the Russian mob. Brian's first mistake, his second mistake thinking he could rip them off. I think it could have gone into more detail on the heist as that was fun to read about the planning and execution (very clever) but otherwise I enjoyed it and will be looking out for more books by this author.
The narrator was very good and I enjoyed his easy style of speaking making it an enjoyable listen.