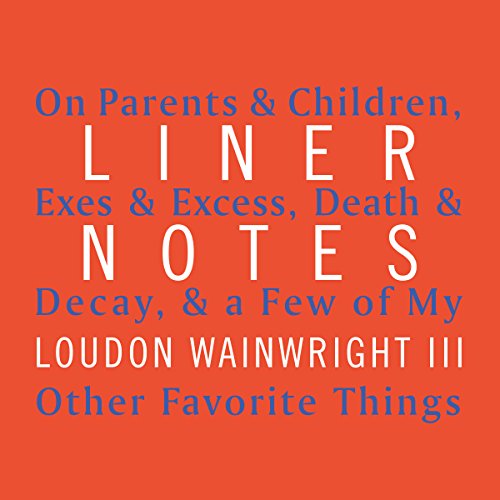 A memoir by the influential Grammy Award-winning singer and actor - son of journalist Loudon Wainwright, former husband of Kate McGarrigle and Suzzy Roche, and father of Rufus Wainwright, Martha Wainwright, Lucy Wainwright Roche, and Lexie Kelly Wainwright - a captivating meditation on relationships and creativity from the patriarch of one of America's great musical families. With a career spanning more than four decades, Loudon Wainwright III has established himself as one of the most enduring singer-songwriters who emerged from the late '60s. Not only does he perform regularly across America and in Europe, but he is a sought after actor, having appeared in such movies as The 40-Year-Old Virgin, Knocked Up, and Sleepwalk with Me and TV series ranging from M*A*S*H to Person of Interest to Parks and Recreation.

There is probably no singer-songwriter who has so blatantly inserted himself into his songs about parents, grandparents, children, siblings, and wives. As he puts it in "So Many Songs": It's taken so long to finally see / My songs about you are all about me. The songs can be laugh-out-loud funny, but they also can cut to the bone. In his memoir, Wainwright continues to emphasize the personal. He details the family history his lyrics have referenced and the fractured relationships in the Wainwright family throughout generations: the alcoholism, the infidelities, the competitiveness - as well as the closeness, the successes, and the joy. Wainwright reflects on the experiences that have influenced his songwriting, including boarding school, the music business, swimming, macrobiotics, sex, incarceration, and something he calls Sir Walter Raleigh syndrome.

The book is very much about being a son - a status that dominates many of Wainwright's songs. But it is also about being a parent, a brother, and a grandfather. Wainwright's song lyrics are represented throughout the book, amplifying his prose and showing the connections between the songs and real life. He also includes excerpts and selections from his father's brilliant LIFE magazine columns - and, in so doing, reestablishes his father as a major essayist of his era. A funny and insightful meditation on family, inspiration, and art, Wainwright's memoir will thrill fans, listeners, and anyone who appreciates the intersection of music and life.

What listeners say about Liner Notes

Best ever book for listening

Loudon is the reader and sings his lyrics accompanied by his guitar. He really takes full advantage of this medium. His story takes us on a fun recent history trip. Very entertaining

If you love Loudon Wainwright’s music, Audible is the only way to consume this book.

I love loudon (tho not sure I would say loudhead as he does)... But he’s slept with almost as many women as my ex boyfriend! Egads man, have u heard of being friends?? Anyway listening is the only way to enjoy this book since there are many songs sprinkled in here. A really fun listen. High wide and lightweight!

This was a fun easy book to listen too. I loved that he included his music and as always his humor. Worth the time, thank you.

If you are a Wainwright fan, you know pretty much what your in for here as you've been hearing about these topics for decades now in practically all of his songs. There's plenty of added detail about the numerous and complicated relationships throughout his life, and while he does cop to his share of the blame he never really seems to admit to all the damage his reckless and selfish behavior most likely caused those he was closest to. Even sadder, at 70 plus years now -with all that water under the bridge and after all the self reflection - you get the feeling there's still not that much joy in his life.
In regard to more practical matters, the book is more serious than funny, so if you re a fan of his lighter, more humorous work this might not be for you. If you knew his dad wrote but never read any of his work, there are some great pieces included here and they are beautifully read by an admiring son. The musical performances - although often incomplete and somewhat bland compared to the originals - are interwoven nicely and often provide excellent context ( not to mention a welcome walk down memory lane for his long time listeners).
All in all, a nice job and one that benefits greatly from being read by its author.

Too much ham and corn, not enough meat

I have never had an opinion of Loudon Wainwright's work--neither positive or negative. But I generally like memoirs, and heard him interviewed on Fresh Air, so I got the book. Several things bugged me about it: 1) the story wasn't told chronologically, each chapter was a discrete topic and so he ended up repeating himself frequently, and it was hard to perceive any progression in his career and/or character development; 2) he was constantly trying to be funny and he wasn't--to me it seemed pretty corny; and 3) his hammy style in reading detracted from the story. I also felt that his description of his teenage sex life and masturbation practices was gratuitous and cliché. Full disclosure--I stopped listening after about six hours. (I was a captive listener as I was driving across North Dakota.) He sprinkles in many of his own songs which could be a positive if one likes his music. Maybe the book got better--I'll never know. If you like celebrity memoirs I highly recommend Rob Lowe's Stories I only tell my Friends, Bruce Springsteen's Born to Run, and Eric Clapton's autobiography.