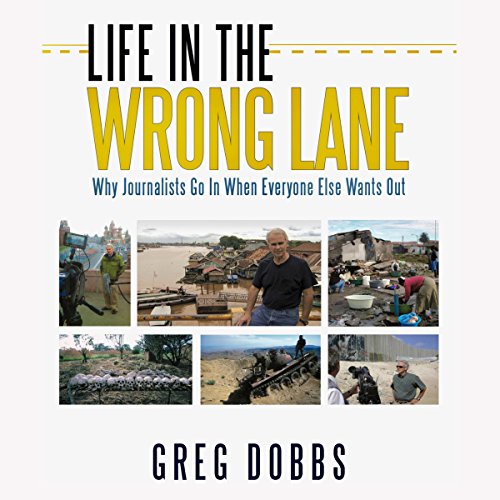 Life in the Wrong Lane

Life in the Wrong Lane

After a lifetime in broadcasting, Greg Dobbs, a two-time National Emmy Award-winning journalist and former foreign correspondent for ABC News, shares the funny, funky, scary, stupid, dangerous, distasteful, unwise, and unbelievable behind-the-scenes stories (including those of his Emmy Award-winning broadcasts) that a journalist can encounter in his lifetime - adventures that are possibly even more interesting than the news being covered.

Dobbs tells his stories with the humor, empathy, and enthusiasm that only someone who has covered news in more than 80 countries could muster. He was an international correspondent based in London and Paris. He covered the Iranian revolution and occupation of the US Embassy, the Soviet invasion of Afghanistan, civil war in Lebanon, and the ejection of the PLO from Beirut; the Iran-Iraq war, the political turmoil that led to the fall of the Iron Curtain, civil war and deaths of IRA hunger-strikers in Northern Ireland, the assassination of Anwar Sadat in Egypt, and civil war in Zimbabwe. Domestically, his major stories included the Watergate scandal, the Native American occupation of Wounded Knee, the execution of Gary Gilmore, and the Exxon Valdez oil spill.

I saw this in Publishers Weekly and decided to give it a try. I always wondered what life behind the camera was like for foreign correspondents in dangerous parts of the world. Now I know. Greg Dobbs really brought his experiences to life...can't imagine just reading it. His performance made me fee like I was there with him.