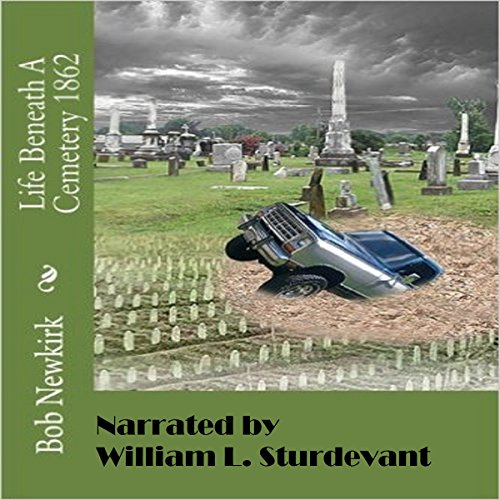 Life Beneath a Cemetery 1862

Life Beneath a Cemetery 1862

On a winter day in 1988, history professor Bob Weddell visits a cemetery in western Tennessee. He meets an elderly man who tells him things witnessed there decades ago. A sinkhole swallows Weddell and his truck into an unexplored cave. Following what he believes to be a passage to the surface, he finds himself in 1862 with a group of Confederate soldiers. Invisible to all, he hitches a ride on a supply wagon to the Confederate camp at Corinth. He witnesses General Albert Sidney Johnston planning the attack on the Union Army 20 miles away. Weddell later travels north, slipping past sentries to Pittsburg Landing.

He locates General Stephen Hurlburt, eavesdrops on conversations, views documents, and finds his 19-year old great-grandfather, Henry. The Confederate attack April 6 is a disaster for the Union Army. Professor Weddell follows Henry throughout the two-day battle as Union troops retreat, then advance. The commentary regarding the hell-on-Earth fight can only be told by a witness to the slaughter. Weddell accompanies his great-grandfather and comrades both nights as they check dead and wounded, the latter expressing thoughts and feelings to one another. Weddell can only be seen by mortally wounded men.

Following the battle, Weddell witnesses General Grant addressing his troops. Through a mishap he finds himself in a river swimming for his life. His return to 1988 is filled with the doubts of even the people close to him about the veracity of his tale.

Life Beneath a Cemetary

This was a very interesting,original book.I loved it!William L. Sturdevant was a perfect narrator.His accents make the story come alive.A man decides to check out a Civil War cemetary.He runs into a man that tells him a story of the tow flooding and bones just being tossed into a big grave.He decides to check it out and drives his truck to the spot.Torrential downpours ensue and he and his truck fall down a hole and into a whole other world.“I was voluntarily provided this free review copy audiobook by the author, narrator, or publisher