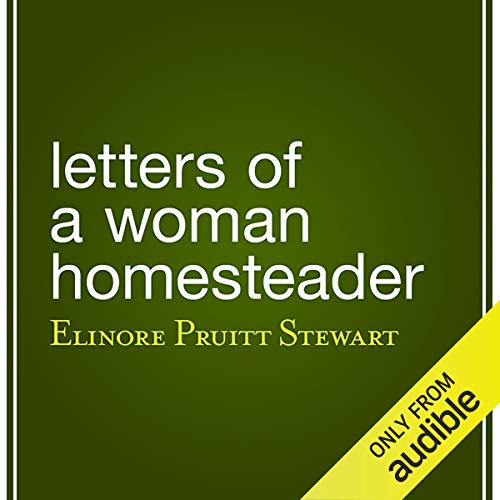 Letters of a Woman Homesteader

By: Elinore Pruitt Stewart
Narrated by: Gwen Hughes
Try for $0.00

Letters of a Woman Homesteader is a frontier classic by Elinore Pruitt Stewart, a widowed young mother who accepted an offer to assist with a ranch in Wyoming. In Stewart's delightful collection of letters, she describes her homesteading experiences to her former employer, Mrs. Coney. Stewart's charming descriptions of work, travels, neighbors, animals, land and sky have an authentic feel. The West comes alive, and everyday life becomes captivating. Stewart's writing is clear, witty, and entertaining. Clear as a bell, concise yet comprehensive, replete with localisms and skillfully rendered frontier humor, it makes one want to toss the PC and reference library into the trash and move to some unspoiled wilderness. The 26 letters are brief and tell about her life on the ranch in the early 1900s. The author frequently and unnecessarily apologizes for being too wordy; she begs forgiveness for many "faults," like being forgetful, ungrateful, inconsistent and indifferent, all without apparent cause. On occasion, language reflects the racial prejudice of the time. Many times in Letters of a Woman Homesteader Stewart attempts to portray the culturally diverse characters she meets by writing their various dialects as they sound. Elinore Pruitt Stewart was a remarkable woman. After enjoying this book, readers will be equipped with a whole new view of not only life in the early 20th century but of the impact woman had on it. Readers of Letters of a Woman Homesteader may also enjoy the film made from it, "Heartland." Elinore also wrote "Letters on an Elk Hunt", as well as many short pieces for periodicals of the day.

What listeners say about Letters of a Woman Homesteader

Every woman in the US should read this book.

As well as every man. This wonderful set of letters written by a woman homesteader back to her friend in St Louis is nothing short of amazing. And the reader does an excellent job of capturing Eleanor's spirit. Audible is terrific but at least read the book. It will open your eyes to the settlement of the West and the role played by women.

Would you listen to Letters of a Woman Homesteader again? Why?

I would, because the narrative is delightful and the writer of the letters was so upbeat, even in the face of tragedy. She found the best of every situation and was very entertaining in the process. Her letters to her friend were full of interesting details of the time period and allow the listener to understand the "pioneer spirit" we so often hear about.

No, I wanted to spread it out so I could enjoy it more before the end.

Ms. Hughes did a great job as the reader. Her voice is extremely clear and her pacing was just right.

How stereotype-busting it is to read texts by real people waking up everyday in another time and place. This one is better than many, as Pruitt Stewart wrote what she believed to be private letters to a particular person, not to a vague future reader. Certainly I "got unstuck" from the 21st C for a good five hours--not saying I'd want to stay in 1909, but this seems a good way to take a look. If you've read deeply in late Victorian or Edwardian lit, work like this can shake your assumptions to the core.

Plain- as it should be

I enjoyed listening to a plain voice reading a plain story. The story was general observations of a wife, mother, homesteader, and friend to her letter recipient. Some drama, some moderate excitement, just life. Nice to listen to while making dinner each afternoon.

I loved this book so much! The thought that this all happened so long ago, and listening to how they used to talk and act back then is so amazing! And the narrator couldn't have done a better job!

I thoroughly enjoyed this Audible book, to the point that I am buying this selection in paperback format for my two daughters. I think they will love it as much as I do. So very interesting. Such a wonderful peep into what life was like back in 1910. I wish it would have been much longer, I could listen to many more hours of this!

I really liked this one overall. Some of the words used in the letters could've used a different type of accent or pronunciation because they were slang/ not proper English and the narrator's voice was almost too "proper English" for this story.
But I love the letter format and this was a nice break from a streak of heavier books (both in content and length)

A short little book on the troubles, tribulations, and joys of homesteading in the early 1900s in Wyoming. A joy to read.

letters of a woman homesteader

I really enjoyed listening to the adventures in each letter. WONDERFUL BOOK❗❗❗💕💚👵
THANK YOU FSD

Narration was ok considering what she had to work with. I was not impressed and would not recommend.