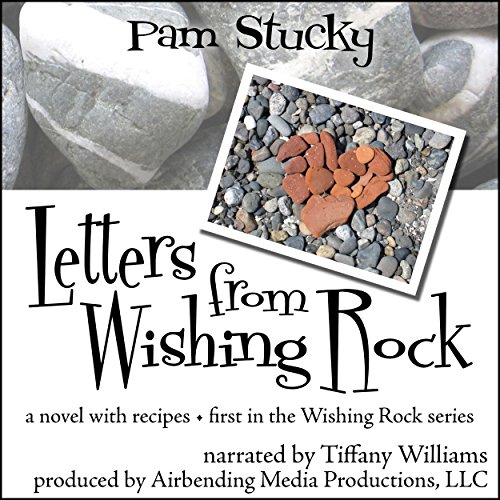 By: Pam Stucky
Narrated by: Tiffany Williams
Try for $0.00

Letters From Wishing Rock is a 2013 B.R.A.G. Medallion Honoree.

What would happen if everyone in town lived in the same building? Ruby Parker is about to find out. Her fiancé has left her and she needs a fresh start, so she moves to Wishing Rock, Washington, a small town on Dogwinkle Island in the waters near Seattle, where she meets a quirky cast of characters who quickly become family. Letters between the neighbors and their friends chronicle the twists and turns of the characters’ daily lives. There’s Jake, a handsome and charming first-year medical student who catches Ruby’s eye from the start, despite his being over a decade younger. Millie, a Wishing Rock resident for 40 years, runs the town’s library, post office, newsletter, and grocery store, knows everyone and everything, and shares the history of the area with her playful wit. World traveler and psychic Alexandra bestows insight and wisdom with humor and compassion, and Ruby’s Gran heads to the United Kingdom, heeding her own advice to seize the day. And then there’s Ed; if something fun is going on, the grandson of the town’s founding father is likely at the center of it. Amidst all this action, Ruby manages to find passion and companionship, but will she be able to open her heart to love?

Online dating, a group trip to Scotland, a discussion about dogwinkles, a fateful hoedown, and friendships old and new, all interspersed with recipes from some of the town’s best cooks, make Wishing Rock come alive in this delightful and insightful look at life, love, relationships, and community.

"It was just what the doctor ordered, fresh, quirky, funny in places and seasoned with wisdom." (Tahlia Newland, author)
"...this book is practically designed to woo me. And it worked.... What it reminded me of most, actually, was the show Northern Exposure, which I also loved." (Molly Ringle, author)

What listeners say about Letters from Wishing Rock

When everyone is under one roof ...

Letters from Wishing Rock is the story of Ruby. She moves to the island town after a break up with her fiance. Wishing Rock is unique because the entire town's population lives in one building. Through emails, news letters and texts, we learn about life in Wishing Rock.

I really enjoyed the concept of this book. Each character in the book is able to give their own spin on situations and events that happen during the story. The personality of the characters are well developed. Ruby and Jake were my favorite tho Gran was close on their heels.

Ms. Williams' narration was a great addition to the story. She read each email, text and news letter in the voice of the person writing it. She also drew me into the story and I couldn't wait to hear what was going to happen next.

I would recommend this book to my friends.

Wasn't sure about the format of this book in the beginning. But as the letters went back and forth between the characters and the story line continued, I became enamored. I'm looking forward to the second and third installments. While not a riveting suspense novel, I rather enjoyed the real life scenarios!
And the idea that everyone in town lives in the same building is intriguing!

This book was really good!I liked getting to know and follow everyone who lived in this town.The narrator,Tiffany Williams,did a fine job with the material.I was gifted a copy for an honest review.

Yes. I enjoyed the story and the narration. I will look forward to reading other works by these two.

Which character – as performed by Tiffany Williams – was your favorite?

My favorite character was the main character, Ruby. My second favorite is Millie.

It was too long for that to be a possibility but it was definitely difficult to find good stopping places!

Best listened to in one sitting.

To be honest, I do not feel that audio is the best format for this book. The book was quirky and fun at times, but rather difficult to follow as the it is written in the back and forth sequence of texts and emails exchange. At least I. Print if you missed the author of a texted email, you can back track a page, rather than minutes.

If you’ve listened to books by Pam Stucky before, how does this one compare?

This was my first book by Pam Stucky.

What does Tiffany Williams bring to the story that you wouldn’t experience if you just read the book?

The narrator did a bang up job of trying yo give each character individual personality.i look forward to listening to more of her work.

Do you think Letters from Wishing Rock needs a follow-up book? Why or why not?

I personally loved the concept of a Wishing Rock and would enjoy another book- IF written in a different format.

What was one of the most memorable moments of Letters from Wishing Rock?

An escapist story filled with wise and foolish characters who are articulate, at least when it comes to communicating by email. Will they find happiness, will the recipes be a springboard for a restaurant? Moving on to the next audiobook.

*
This is a collection of stories via email. I could not focus or find a main character. There was a theme about dating and who the perfect man would be, what was up, other than that it just seemed like random emails.

The book made me chuckle a bit and while I would not buy it on my own, the collection made me giggle at times.

Tiffany Williams helped hold the story together. Her voice and mannerisms that cracked me up. She is very professional and listening to this book was pleasant because of her narration.

Notes: Some descriptions of sex & a few swears

Credit worthy/$: I would consider both using a credit and/or buying it on sale. This is outside my wheelhouse and I would not purchase it on my own. However, it is a really good Chik Lit and perfect for someone who needs a distraction on vacation or lighthearted read

*I was given a copy of this book in exchange for my thoughts, opinions and this review.*

Did you find my review helpful? If so, please select yes below this text. Thank you.

This just did not work for me, I don't believe this book works as an audiobook, why not?
To start with, the emails, I found it so annoying when the narrator, instead of just saying "re" would pronounce it as "Are Eee". OK, maybe my annoyance was irrational, but nevertheless, annoyed and irritated I was. As the book is all about emails, my irritation like Topsy, just growed and growed until I could listen no more!
Then the recipes, all in American of course, "a cup of this a stick of butter plus one tablespoon", conversion is not normally a problem, but having to keep rewinding as it were, in order to transcribe the recipes, well just too much trouble really.
These annoyances prevented me from actually listening to what may well be an interesting story, indeed, the book editions have some very good reviews so don't let me put you off.

Other than the "re. v Are Eee" business, I thought the narrator did a good job, pleasant voice, good gender changes and characterisations.

I would not normally post an unfavourable review, however, this audiobook was gifted to me specifically for a review in exchange.

New recipes to try as you listen

This is an interesting concept. Everyone living in one building. I think it would either force people to get a long, or avoid each other. For Wishing Rock, they have their ups and downs, but they do get along. Each character brings a different aspect to the community. It is a unique way to write a story, through letters. But through the letters, we come to love the citizens of Wishing Rock. The best part is all the new recipes that are discussed in the story, and then I could create myself.

Tiffany Williams can narrate any cookbook she wants for me. I love Ms. Williams narration, but I was worried how it would be to have a recipe read to me. Ms. Williams made the reciped flow as if it was just another page in the story. I thoroughly enjoyed this narration.