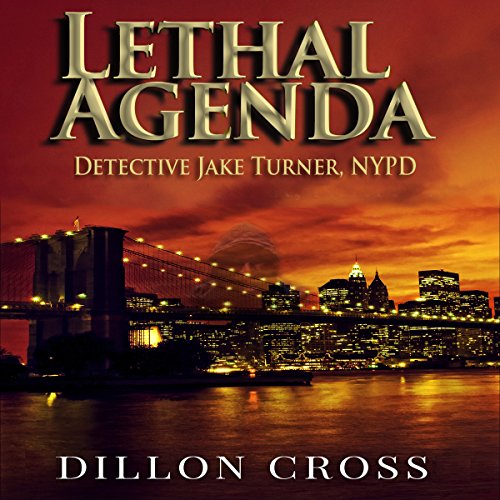 Due to a series of large drug busts gone wrong, Detective Jake Turner is convinced that there is high level of corruption in the NYPD.

Jake finds himself hated by his fellow detectives, and ostracized by his squad, after being accused of negligence in the violent death of his partner the previous year. He is wanted by the mob, on the run, and framed for a murder he did not commit. He has to face up to his past as he fights to save what's left of his future, and comes to the realization that he must choose who he can save, and who he must let go.

High level political operatives are determined to protect their lucrative interests at any cost, including murder. No one in Jake Turner's world is safe. He vows to save those he can, and avenge the rest. There are enough twists and turns in this highly charged action thriller to keep you listening, right up until the end.

LETHAL AGENDA is a debut thriller written by Dillon Cross. It is the first in the Jake Turner series. After listening I can honestly say I hope this author is not a one hit wonder! This is an excellent procedural with plenty of action and suspense.
The author does a great job fleshing out the characters and giving them believable situations.
The story is very unique and I won't go into detail because I don't want to spoil this book for anyone.
The publisher's summary and an excellent (and lengthy) review by another Audible reviewer gives more then enough information.
Connor Hall does a fantastic job narrating.

I just wanted to add how much I really dislike the new listener page. I wrote Audible on their contact page and complained. Maybe if enough people do this they might change it back. I did get a response saying my letter would be forwarded to the appropriate person.

HIGHLY RECOMMENDED.
If you found this review helpful please indicate so.
Thank You.

Lethal Agenda is the first published novel by Dillon Cross and the first novel in his Detective Jake Turner series. The second novel in the series titled Jihad has been announced on Dillon Cross' author's page but no release date has been announced. As is frequently the case I learned about this wonderful novel by following the reviews of Audible listener Shelley of Raleigh, NC.

Lethal Agenda has everything fans of the suspense mystery/thriller genre could ask for including well developed characters, fast pace, lots of action, intense suspense, a well developed plot, and outstanding narration. It is a must listen 5 star mystery thriller.

I am reposting the review as my original Audible review for this book has disappeared.


In all of my reading - I have preferred reading paperback, ebook or hardcover books as opposed to audio books. I have not been impressed with audio books - the narrators' voices did not match the characters I had in mind, the inflections were off, they did not seem to get the plot. That is - until this book.

The narrator for this book is perfect. He has the deep, whiskey laden voice that is reminiscent of the old days of black and white TV Private Detective narrators. It evokes images of 'Dames, Gams, Whiskey, Martinis, smoke filled rooms, etc' and woos you into the life of a NYPD Officer instead of a Private Investigator.

The narrator's other voices are good as well. A couple of voices made me chuckle - in the best of ways.

This book (and hopefully series) is original and it is refreshing. It is not a spy book. It is not a Private Investigator book. Yet it has elements of both intertwined with the NYPD.

This book is a good peek into the life of a NYPD Detective, one of the good ones. The main character, Jake Turner, is a man, he is solid and he is not like the current psychobabble navel reflecting alpha turned beta males that are so common place in action books these days.

He is straightforward, all male, he has a brain, can think, strategize, plan and he can assess situations accurately. He is not a muscle bound oaf that requires a female to think for him. He has a good heart. Refreshing.

He is out to expose corruption and take down the corrupt even at the expense of his career.

The women are strong - USA Pioneer strong with a healthy dose of sass, wit, intelligence and humor as well. Feminine and strong.

I appreciate the end. For ONCE in a long time - unlike most books on the market today - we do not have some nefarious bad buy who got away with their deeds waiting to pop up in a future book.

It is nice to have closure - and a solid closure. One I think many will relate to.

I don't want to give the story away - so I will end this review here.

Given the landscape is in New York - I can only imagine the scenarios that can be painted for future books.

I really enjoyed listening to Mr. Cross's story; it is well suited for the audio format. The main character was an up and coming star in the NYPD until his best friend and partner was killed in a drug bust gone wrong. In the year since his friend's death, his personal and professional life has fallen to pieces. The author does a great job of weaving a mystery with the main character's attempt to find ansolution. I also enjoyed the other characters and hope they are given stronger development if Mr. Cross decides to continue with a series. Well worth a credit.

I recommend this book for adults who love crime drama. This new author developed his characters like an experienced writer. The story was interesting and believable. I thought that the narrator was perfect for the character he was portraying. Crime drama is not my usual genre but I can't wait for the next book in this series!