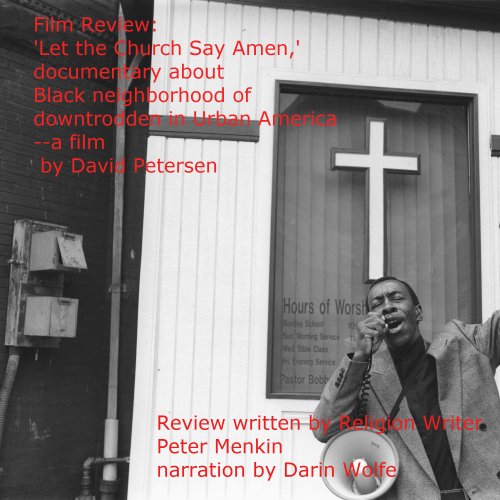 A Documentary About the Downtrodden Black Neighborhood of Urban America by David Petersen
By: Peter Menkin
Narrated by: Darin Wolfe
Length: 31 mins
Categories: Arts & Entertainment, Art
4.5 out of 5 stars 4.5 (2 ratings)

They dance. They sing. They speak in tongues and shout - so the Reverend Bobby Perkins elicits. Dauntless, a stand-up Christian, Reverend Bobby Perkins preaches in the subways of Washington, D.C. where he has a heart for the drug addicts. His church members preach on the streets and speak to the lowly; real conversation goes on in this documentary. These are real people, and you may not have met them before.

The movie directed by David Petersen is a moving and extraordinary documentary in an oft verite style, both in color and black and white. Message gets through to the audience in this film, as does action, attitude, and scenery of places in Washington, D.C. that are known for store front churches - like Pastor Perkins' in the neighborhood where his is on a corner. There are other churches like his in their neighborhood.

Not solely a religion film about a church, the movie, "Let the Church say Amen," is David Petersen and friends' vision of a life in the poor, black neighborhood of forgotten people and streets with crime, drugs, and just ugly nastiness. There is more than the message of church, religion, and community alone here. There is a cinematic depiction of what is in the genre of drama and artful realism.