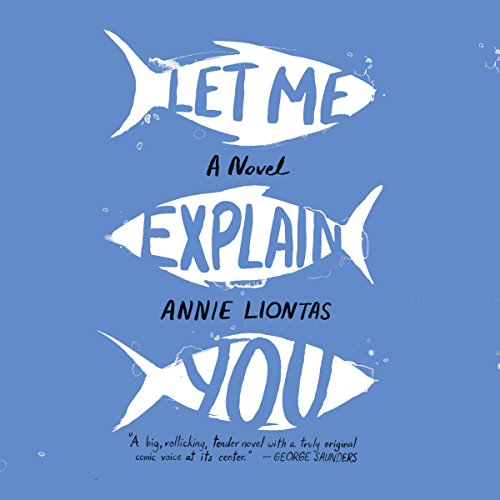 Let Me Explain You

By: Annie Liontas
Narrated by: Robertson Dean
Try for $0.00

Let Me Explain You begins with a letter: Stavros Stavros Mavrakis, Greek immigrant and proud owner of the Gala Diner in New Jersey, believes he has just 10 days left to live. He sends a scathing email to his estranged ex-wife and three grown daughters, outlining his wishes for how they each might better their lives. He then prepares for his final hours and wonders why he is alone. With varying degrees of laughter and scorn, his family and friends have dismissed his behavior as nothing more than a predictable plea for attention, but when Stavros really does disappear, those closest to him are forced to confront the possibility of his death and the realities of their loss.

A vibrant tour de force told from multiple perspectives and driving to a surprising conclusion, Let Me Explain You eulogizes Stavros Stavros, turning in part on his realization that "a man spends his whole life trying to say it better" while giving necessary voice to the women in his life. This multigenerational novel explores our origins and family myths, reinvention and forgiveness, hunger and what feeds us. Let Me Explain You is a beautifully told, heartfelt story, and its meditations on the communal power of storytelling and family - most notably the relationship between fathers and daughters, but also the complex bond of sisterhood - are at turns hilarious and deeply moving.

"Annie Liontas has fashioned from the raw facts of immigrant experience and family life a hilarious, fascinating, poetic work of fiction. You'll find yourself rereading it aloud for the guffaws it yanks from you. A dazzling debut destined to become a classic." (Mary Karr)
Let Me Explain You is a big, rollicking, tender novel and family saga with a truly original comic voice at its center - a Greek father who is part Zorba, part King Lear. Annie Liontas has an amazing ear, a real fondness for people, and a killer sense of structure." (George Saunders)

What listeners say about Let Me Explain You

I'm a second generation American of Greek descent. I speak, read, and write Greek.I was so happy to hear this book touted as one of this summer's best reads, I bought it as soon as I heard about it. The reviews on Amazon were good, so I believed I was in for a treat.

The book started well; I was actually laughing out loud in bed listening to the first hour or so. It went downhill from there. As I continued to read, I had a nagging sense of something wrong that I couldn't pinpoint. This thought didn't crystallize until the final 2-3 hours.

It was when Stavroula went to July's house in the wee hours of the morning and put a lamb roast (I believe it was a rack) in the oven at 130 degrees that it hit me like a slap in the face. The author knows nothing of cooking; 130 degrees is barely warm, and would never cook the rack. Certainly, no professional cook (which Stavroula was) or chef would put a rack in the oven at 130 degrees. This setting would be used to keep an already cooked piece of meat warm before serving, but not to cook.

Sure, we can argue that the actual temperature is irrelevant, the point being it should be cooked low and slow, as taught by Stavros. I can't eat that dish because it lacks basic skill. It's just not real. It reveals an author speaking to matters of which she knows little.

This is what I found in the characters and story; a lack of authenticity. The characters, as detailed as their descriptions are, are not truly cooked. Their relationships to each other are for show, not depicting anything I'd believe in as real. Stavros didn't know that Dena was an addict during her pregnancy? Really? It was right there in his face, he saw her consuming drugs but passing them off as "medicine." It's almost insulting that Greeks are represented as this dumb.

Similarly, the story suffers from lack of story telling skill. This too, is revealed in the ending, which I don't want to describe because it would be a spoiler. Suffice it to say that even the least educated former village dweller wouldn't believe he was going to die because a goat told him so in a dream. Oh, puhleeze!

What I really hated about this book was the narrator. He butchered the Greek words to the point where I had no idea what word he had used. This is a professional production; if non-English words are used, then coach the narrator to pronounce them correctly. For example, the Greek for no is "oxi." It's pronounced ohhee, as close as I can get phonetically. The narrator pronounces it as Oxy, with a long O, like the stain remover. Disgraceful.

Finally, the breathy voice used for all the characters was irritating. By the end of the book, I was just glad to be done with it.

This story is about Diners, food, immigrants, family, sisters, mothers, fathers - nothing better for a Jersey boy's soul. Beautifully written - poetic prose, and, oh, the descriptions of food and the weaving of food into the fabric of family life and struggle is masterful. There were times that the writing was a little choppy with cuts between dreams, poetry and prose that was hard to follow, but the story and above all the characters carry this book to mastery. I "read" the audiobook version and the production quality was a little lacking - too muffled at times, but again - did not detract from this book. If you are Greek, from Philly or Jersey - this is a MUST read - MUST. You gotta problem wid dat?

Good story. A bit crude in parts. It made me look up the author. I loved the insight into the Greek culture. The narrator was pretty good, except when he did a female voice.