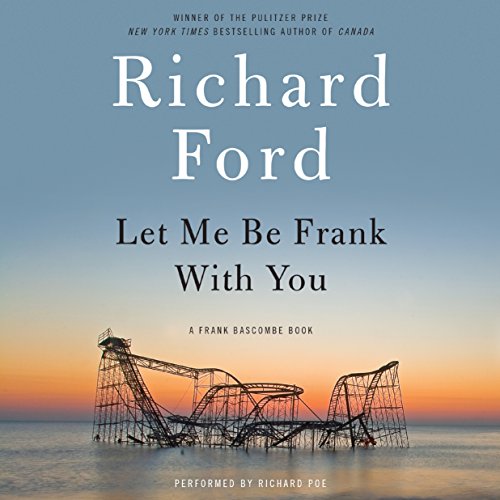 Let Me Be Frank with You

By: Richard Ford
Narrated by: Richard Poe
Try for $0.00

In his trio of critically acclaimed, best-selling novels - The Sportswriter, the Pulitzer Prize and PEN/ Faulkner-winning Independence Day, and The Lay of the Land - Richard Ford, in essence, illuminated the zeitgeist of an entire generation, through the divinings and wit of his now-famous literary chronicler, Frank Bascombe, who is certainly one of the most indelible, provocative, and anticipated characters in modern American literature.

Here, in Let Me Be Frank with You, Ford returns with four deftly linked stories narrated by the iconic Bascombe. Now 68, and again ensconced in the well-defended New Jersey suburb of Haddam, Bascombe has thrived - seemingly if not utterly - in the aftermath of Hurricane Sandy's devastation. As in all of the Bascombe books, Ford's guiding spirit is the old comic's maxim that promises if nothing's funny, nothing's truly serious. The desolation of Sandy, which rendered houses, shorelines, and countless lives unmoored and flattened, could scarcely be more serious as the grist for fiction. Yet it is the perfect backdrop and touchstone for Ford - and Bascombe. With a flawless comedic sensibility and unblinking intelligence, these stories range over the full complement of American subjects: aging, race, loss, faith, marriage, redemption, the real-estate crash - the tumult of the world we live in.

Through Bascombe - wry, profane, touching, wise, and often inappropriate - we engage in the aspirations and sorrows, longings, achievements, and failings of American life in the morning of the new century.

Whether you've been a Bascombe insider since The Sportswriter or are encountering Ford's unforgettable inventions newly here, Let Me Be Frank with You is a moving, wondrous, extremely funny odyssey, showcasing the maturity and brilliance of a great writer working at the top of his talents.

"Narrator Richard Poe is a gifted interpreter of Ford's vision, with his sonorous tone and casual but engaging pacing. This latest check-in with Frank depicts the ordinary frustrations of life that everyone has to deal with, mixed with the disheartening and inevitable problems of growing older. Poe's subtle narration is filled with nuance, along with a nod to both the character's and the author's maturation." ( AudioFile)

What listeners say about Let Me Be Frank with You

Laconic but oh so serious

Would you consider the audio edition of Let Me Be Frank with You to be better than the print version?

The actor's intonation helps contextualise the human being represented. Very useful for a non American.

What was one of the most memorable moments of Let Me Be Frank with You?

There are many cameo moments. Sometimes an " aside," such as the " fear of falling" passage, grabs you and totally immerses you in " Frank's" life.

What does Richard Poe bring to the story that you wouldn’t experience if you just read the book?

Poe's gentle pace, not strident accent and tone of bemusement and pain are rendered most authentically.

If you could rename Let Me Be Frank with You, what would you call it?

Read this if you are approaching or have already reached your next, but last phase.

This entire book feels like Ford gathered leftover bits and pieces from yet another trip to the Frank Bascombe well and put them together to work out his issues with race. It's a boring book about old white man angst with no unexpected plot twists or any real development. The characters have the same depth as a wet cardboard box. Ford is better than this and is beating a dead horse with this book. Try Canada or one of Ford's story collections. Purchasing this book will only encourage Ford to write yet another Frank Bascombe time waster.

There is something about the ordinariness of Frank Bascombe that is captivating. After a few chapters you know what he’s going to think and say because you know who he is. What makes him interesting is that he’s totally unapologetic. He knows who he is. He knows the Life he’s led, the relationships he’s had and the mistakes he’s made and he’s OK with that.

Now, in his declining years, he’s got his regrets, but he’s not going to whine about them and he doesn’t ask his readers to pity him. He wants you to listen to what he’s got to say, and it’s been a pleasure to do so. Four Stars and excellent narration. Thanks.

Too bad this is the end.

Great collection of Frank Bascombe stories. Wish there were more books to read about him.

Very entertaining book with little nuggets of truth that's both refreshing and reflective! Made my 2hr commute fun.