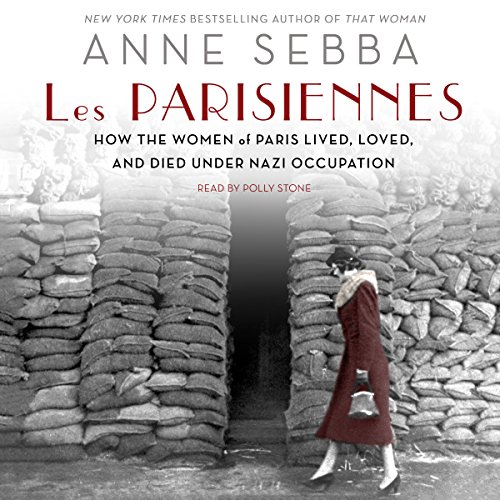 New York Times best-selling author Anne Sebba explores a devastating period in Paris' history and tells the stories of how women survived - or didn't - during the Nazi occupation.

Paris in the 1940s was a place of fear, power, aggression, courage, deprivation, and secrets. During the occupation, the swastika flew from the Eiffel Tower and danger lurked on every corner. While Parisian men were either fighting at the front or captured and forced to work in German factories, the women of Paris were left behind, where they would come face-to-face with the German conquerors on a daily basis, as waitresses, shop assistants, or wives and mothers increasingly desperate to find food to feed their families as hunger became part of everyday life.

When the Nazis and the puppet Vichy regime began rounding up Jews to ship east to concentration camps, the full horror of the war was brought home, and the choice between collaboration and resistance became unavoidable. Sebba focuses on the role of women, many of whom faced life and death decisions every day. After the war ended, there would be a fierce settling of accounts between those who made peace with or, worse, helped the occupiers, and those who fought the Nazis in any way they could.

This program includes an interview with the author and her editor. The audiobook is read by Polly Stone, narrator of The Nightingale and Sarah's Key. In a starred Library Journal review of The Nightingale, Stone was applauded for her "impeccable narration that brings...wartime France to life with a distinctive and memorable set of voices that will keep listeners coming back for more."

What listeners say about Les Parisiennes

At least for me, this provided a unique story about World War Two. It was told from the POV of French women and their fight to survive the conflict. Sebba covered as many perspectives as she could, telling the stories of collaborators, resistance fighters, Jewish women and other Parisiennes who we just trying to come out alive. Most of their stories were new to me.

And that is the one issue I had with the book. Sebba told the stories of dozens of real French women. As an American who has a fairly good general knowledge of World War Two, I had actually heard of only the 3 or 4 of the women included in the story, Collette, Chanel, Odette and the Rothschilds. I simply could not keep track of all of the women's names, much less their stories, as she jumped from one woman to the next. There were times when she was speaking of one woman's experience, that I thought had already died.

However, for this type of history book, I think this is to be expected. It has just made me commit to reading it again soon. Hopefully with a second or third reading, these amazing women will sort themselves out in my head.

I thought the narration was great. I highly recommend this book.

This book is very informative. It is a compilation of many people's lives at the time. Some are long some are snippets. Some very interesting and some boring. The book bounces around a lot so it isn't like a novel. It is informational. I learned a lot about Paris at that time. I would recommend it to anyone wanting to understand Paris under German occupation.

Comprehensive, historical history of the French resistance. An important, significant story not to be forgotten.

This book captures the plight of women, an oft overlooked subject of Holocaust and WWII history. This book would make a nice companion to the brilliant Ravensbruck, by Sarah Helm, because there is some overlap, with the latter truly bringing the horrors of the women’s camp to light. The narrator is excellent. All in all, it’s an excellent listen.

Loved it! We in America need to take note of the strength and ingenuity of these brave women.

Not worth the time to read

I did try to give this book a chance but the more I read into the culture-mindset of these Parisiennes, I could not get pass the third chapter.As this book was written during the timeline of the Nazi occupation, I found them to be very shallow and too vain for my taste. Example, they would put fat on their hands instead of in their belly (for food).