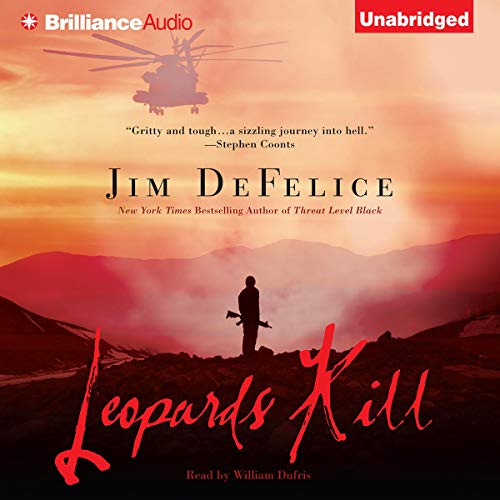 By: Jim DeFelice
Narrated by: William Dufris
Try for $0.00

Former U.S. Army Special Forces soldier Jack Pilgrim has it all - big bucks, a successful security business with plush government contracts, a beautiful wife. Then Pilgrim's partner, Merc Conrad, goes missing in Afghanistan with a chunk of government cash and most of the company's assets. The CIA threatens to throw Pilgrim in jail if he doesn't find Merc and return the money. Pilgrim knows his business - and his extravagant lifestyle - are on the line, but Merc saved Jack's life three times while they served together in the army in Afghanistan. So Jack owes him. Big.

Determined to find Conrad, Pilgrim returns to Afghanistan. The country is in chaos as the United States prepares to pull out. Pilgrim follows Merc's trail to the border area of Pakistan; with every step he seems to descend deeper into a Dantesque hell. Rumor has it that Conrad has fielded a guerrilla army and is hot on the trail of Osama bin Laden. The farther into the uncharted border zone Jack Pilgrim goes, the larger the legend of Merc Conrad becomes. Pilgrim's odyssey into the Afghan badlands has him questioning his own reality, and the closer he seems to get to Conrad, the more peril he faces. If Jack Pilgrim wants to get out of Afghanistan alive, he may need Merc Conrad now more than ever.

What listeners say about Leopards Kill