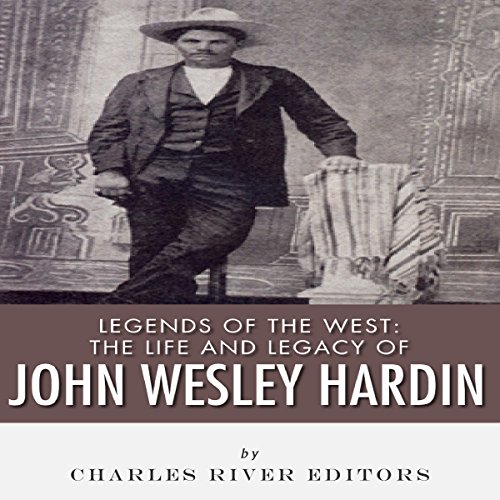 Legends of the West: The Life and Legacy of John Wesley Hardin

Legends of the West: The Life and Legacy of John Wesley Hardin

Space may be the final frontier, but no frontier has ever captured the American imagination like the Wild West, which still evokes images of dusty cowboys, outlaws, gunfights, gamblers, and barroom brawls over 100 years after the West was settled. A constant fixture in American pop culture, the 19th century American West continues to be vividly and colorful portrayed not just as a place but as a state of mind. In Charles River Editors' Legends of the West series, listeners can get caught up to speed on the lives of America's most famous frontier figures in the time it takes to finish a commute, while learning interesting facts long forgotten or never known.

America has always preferred heroes who weren't clean cut, an informal ode to the rugged individualism and pioneering spirit that defined the nation in previous centuries. After the early 19th century saw the glorification of frontier folk heroes like Davy Crockett and Daniel Boone, a new breed of folk icons inhabited the Wild West, and one of the most notorious and controversial of them all is John Wesley Hardin, still regarded today as Texas' most deadly gunfighter and most famous outlaw.

Outlaws like Jesse James and Billy the Kid robbed and fought their way into dime novels, but Hardin managed to write his own way in, all while his encounters with the law in the South during Reconstruction made him a hero of sorts among Southerners. Hardin managed a stint in prison, claimed to have killed dozens of men, had an encounter with Wild Bill Hickok, and was even alleged to have killed a man because he was snoring.