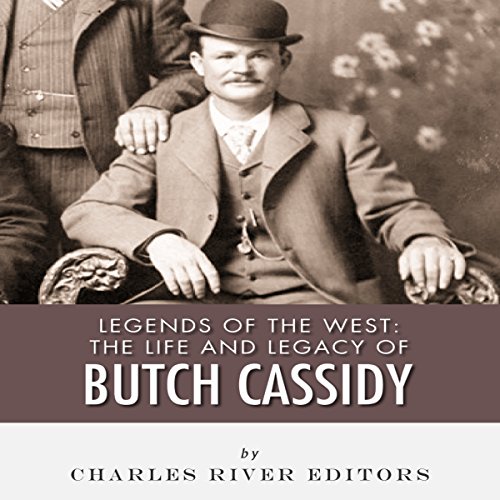 Legends of the West: The Life and Legacy of Butch Cassidy

Space may be the final frontier, but no frontier has ever captured the American imagination like the Wild West, which still evokes images of dusty cowboys, outlaws, gunfights, gamblers, and barroom brawls over 100 years after the West was settled. A constant fixture in American pop culture, the 19th century American West continues to be vividly and colorfully portrayed not just as a place but as a state of mind. In Charles River Editors' Legends of the West series, listeners can get caught up to speed on the lives of America's most famous frontier figures in the time it takes to finish a commute, while learning interesting facts long forgotten or never known.

The Wild West has made legends out of many men through the embellishment of their stories, such as crediting Billy the Kid and Wild Bill Hickok for killing far more people than they actually did. But it has also made icons out of outlaws like Butch Cassidy and the Sundance Kid based on the mystery and uncertainty surrounding their crimes and deaths, allowing speculation and legend to fill in the gaps.

Alongside Jesse James, Robert LeRoy Parker has become remembered as Butch Cassidy, one of the most notorious outlaws of the west. Though he is commonly associated with the Sundance Kid, the duo had a full-fledged gang known as the Wild Bunch conducting robberies in the Southwest, and they became legendary for their shootouts and their escapes from the law. Eventually, Butch Cassidy and his most famous acquaintance fled as far east as New York City and as far south as Argentina.

In fact, it was in South America that Butch Cassidy and the Sundance Kid are believed to have met their ultimate fate, in yet another shootout with Bolivian soldiers. The mystery and controversy surrounding that shootout (and whether the two bandits were actually them) have helped ensure their place in Western lore, and as with so many other legends of the West, people continue to speculate that Butch Cassidy and the Sundance Kid survived and lived out the rest of their lives.

Legends of the West: The Life and Legacy of Butch Cassidy chronicles the outlaw's life, while also analyzing his legacy and the mythology that has enveloped his story, attempting to separate fact from fiction to determine what the notorious robber was really like.

What listeners say about Legends of the West: The Life and Legacy of Butch Cassidy

Narrator was not interested in the story. The story, was nothing new about Butch Cassidy.