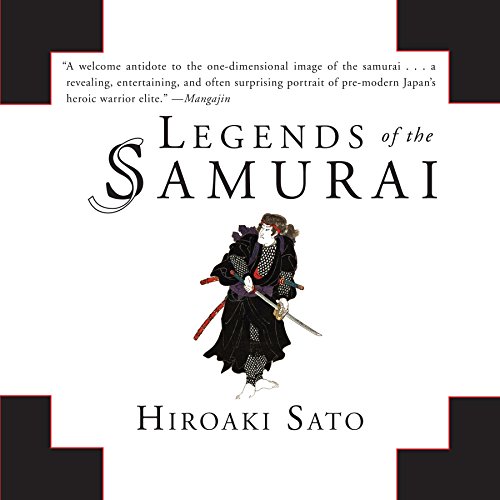 Legends of the Samurai

By: Hiroaki Sato
Narrated by: Walter Dixon
Try for $0.00

Over the decades, the reputation of the samurai has grown to mythical proportions, owing to such films as Akira Kurosawa's Seven Samurai and Yojimbo, as well as works such as James Clavell's epic Shogun.

In Legends of the Samurai, Hiroaki Sato confronts both the history and the legend of the samurai, untangling the two to present an authentic picture of these legendary warriors.

Through his masterful translations of original samurai tales, laws, dicta, reports, and arguments accompanied by insightful commentary, Sato chronicles the changing ethos of the Japanese warrior from the samurai's historical origins to his rise to political power.

A fascinating look at Japanese history as seen through the evolution of the samurai, Legends of the Samurai stands as the ultimate authority on its subject.

What listeners say about Legends of the Samurai

With so many Japanese names, places, quotes and poetry, couldn't they get a reader who could pronounce them correctly? The reader was good if it was English, but treated what is a beautiful language, terribly. I believe it did this book a great disservice. Listening to the readers pronunciation of Japanese, was like nails on a chalkboard. There was lots of good information, but the mispronunciation for me was very distracting and frustrating. Unfortunate.

Even if the reader anglicized the japanese words and phrases, as this seems to bother some folks, I thoroughly enjoyed these retellings of old legends very much, and would definitely recommend this work for anyone interested in the Samurai class. Anglicized Japanese dosen't negate the research and compilation that ie presented here.

Not Worth the Purchase or the Listen Even if Free

This is by far the worst audio book I have listened to thus far. There was no sense of organization and it frequently skipped around to different eras. It would make sense had this been advertised as a collection of short stories taken from noted historical tellings. My initial impression was there would be linear story telling of the ways of the samurai. Instead, it's hours and hours of pronunciations being butchered and stories being told in a random fashion. The narrator sounded so dull and tired it seems as if he too hated reading the book. There was no emotion in any retelling and was one solid flat pitch for hours. Seriously struggled to get through this.

What would have made Legends of the Samurai better?

I downloaded this for a class I was in. The reader nearly put me to sleep when I was listening.

What could Hiroaki Sato have done to make this a more enjoyable book for you?

This subject wasn't much of interest to me. So with that being said it is difficult for me to give an unbiased opinion

He was very monotone. I did not enjoy his voice and I thought his reading style was boring.

I helped me realize and recognize that the samurai were a complex and proud people. But they were also babaric. Very good historical account, probably would enjoy it if you were into asian history.

I struggled to finish this book. Whether it's just the translation of the original text, I felt it lacked pace and very few of the characters held any interest. The subject would have been much better if the author refrained from stating ad nausea that so and so was a captain of the outer palace guards left division 3rd class, which constant repetition slowed down the story. This book is sadly one best avoided.