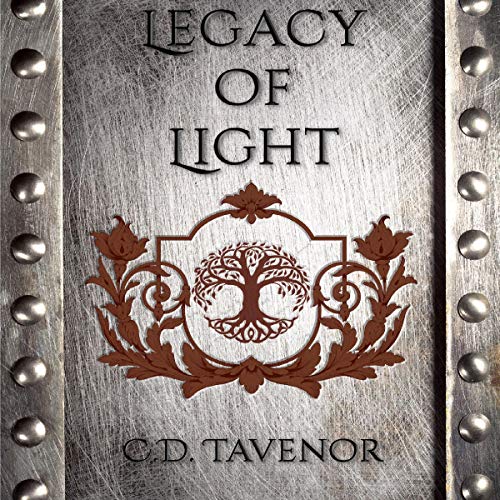 If only they knew us as more than accursed.

The Holy Empire hates the People of Light. Maripes, arriving in its capital, seeks to save his people from certain destruction. The Inquisition seeks theocratic justice, and it will stop at nothing to rid the world of those it considers evil. Still, Maripes must try. For, if he fails, doom will certainly befall his people.

Standing in his way? The high inquisitor, the empress, and a million subjects all indoctrinated to believe he is evil incarnate.

Should be an easy task.

Otherwise, his son Mono, a soldier in the legions of their people, will face the fight of his life.

In the end, will Mono's daughter be forced to pick up the pieces of a broken world?

What listeners say about Legacy of Light

C. D. Tavenor managed to create an impressive tale spanning three generations in a story that the word count is not very large. The first segment ended and I was left with, "Wait, what? Is that all?" The next segment picked up with the next generation in the same family and finished and again I thought, "Wait, what? Is that all?" The last segment picked up with the third generation of the family and ended with an emotional flourish. At first I found the segment ending and picking up telling a story about a character from the next generation was a little confusing but once I grasped what was happening, the story captivated me. On the whole I found the story very entertaining but also felt some little dissatisfaction as each segment left me wanting just a little more to each generation's story, I can't wait to find out what happens next. Alix Nicole provided a fantastic job in the narration. I was given a free copy of the audiobook and I have voluntarily left this review.

Even great epics can come in small packages.

I wasn’t sure what to expect from this book, even though I’d read the plot summary. It reminded me of Star Wars a bit, but I wondered if it would be more like a very short “Game of Thrones” type of story. I needn’t have worried. This book has the unique distinction of being the first book I’ve ever read to neatly compress an entire saga into just over three hours of audio. And that’s unabridged, folks!

If you find yourself in the mood for an epic fantasy, but don’t have time to drop everything and immerse yourself in a door stopper of a book, I highly recommend you give “Legacy of Light” a read. I’m confident you’ll thank me afterward, and wish there were more to come. Hey ... maybe there is. I, myself, can’t wait to find out!

Put down the D&D book, pick up something better

A powerfully written story that demands we put aside our D&D trained assumptions about which species does what, Legacy of Light is a powerful and moving journey through three generations of a family's history. It echoes the style of older travel memoirs, mixing in just a sprinkling of Tolkien. But this time the characters are not who you expect.
With his usual deftness, Tavenor gives the reader (listener) new eyes to look through, and shows us how to be compassionate for another way of being alive.
The narration was well done and pleasant, and it supported the story beautifully.

This is an epic adventure, a truly magnificent story spanning many years and generations. It's definitely worth the time spent to read (listen) this book.

I listen to audiobooks while working in my studio. This way I can pay attention to what I'm working on and still "read" my book. The narration of this book is very good. Her diction is spot on and she can actually sound like the female or male character she's reading.

This is a great book to listen to in the car, when you're grocery shopping or just relaxing.

I really enjoyed this book. The narrator was very good and brought the characters to life. I am looking forward to more books by this author

A twist to the fantasy genre that's exciting

truly enjoyed this story and this great narrator
This story opens the door to many sequels built around the people of light. The writer did every thing right on this one, from the opening to the exciting end.

I really enjoyed this story

Ermo was a great hero. When Ermo & River were first learning about her power it made me chuckle. I was very glad when she found her people being heild prisoner in the tunnels and then saved them. A great story.

This was a little different than anything I have read or listened to. It took me a few to realize that the smith was an Orc, I was a little slow. This one book spans a 20-30 year period, in this time you had a person executed for something that he did not do, you had the child of that person die in battle, and then the grandchild become almost god like. The narrator did a good job with this story, the emotion she voiced was spot on. I really enjoyed this and I am eager to start the next book to see what happens on that side of the story.

I received a free copy of this audiobook from StoryOrigin for an honest review.

Another triumph by Tavenor

Wonderful. Once again Tavenor has produced a splendid tale. This magical bit of fantasy and adventure wrapped me up and held me right to the end. I can't wait to start book two. I received a free review copy of the audio version of this book in exchange for an honest review.

The ‘Legacy of Light (The Compendium Book 1)’ is an interesting read with highly descriptive writing, and I like the artwork for the cover incorporating the Tree of Life (it looks like a coat of arms). This story spans three generations and is centred around the Holy Empire (apparently a benighted theocracy) and the People of the Light (a more enlightened society).

With a theocracy, we are expecting an enemy of freedom and enlightenment, frequently using persecution, oppression, indoctrination, propaganda, the promotion of conspiracy theories with the aim to spread lies and misinformation to prey on fears and encourage prejudice, the denial of civil liberties, torture, and death by murder, execution or ‘holy war’. All done in the name of whatever ‘God’ is the theocracy’s recognised deity and orchestrated by some form of clergy as the power-wielding puppet-master. We don’t learn the name of the Holy Empire’s deity, but it is its religion that declares the ruling family to be entitled to rule in perpetuity (supposedly by ‘divine’ right). It turns out that the High Inquisitor is a member of that ruling family and he is a treacherous individual.

The People of the Light demonstrate that they have a more enlightened society. Clearly their own religion (centred on the Lord of Light) is an important part of their lives but they embrace tolerance and compassion and there are more freedoms. Same sex-marriage and same-sex parenthood are accepted and women are warriors and priests. Peace, harmony and love is preferred to war but they are prepared to defend themselves and to fight for freedom.

Maripes tries peaceful negotiation with the Holy Empire but he is framed for a murder he didn’t commit and is executed. His son, Mono, as a warrior, spends many years fighting to defend the lives and liberty of the People of the Light, eventually dying doing so. However, his final actions buy a period of greater freedom for some of his people because they are now effectively out of reach of the Holy Empire, and his daughter, Ermo, is given the chance to grow up. It also fulfils part of a prophesy contained in a scripture that apparently points to Ermo being the future ‘saviour’ of her people.

The book itself is divided into three parts, each one dealing with three different members of the same family. Ultimately, the main character is Ermo, and the bulk of the story centres around her, but it is necessary to have some context. The first two parts featuring Maripes (her grandfather) and then Mono (her father) do this successfully and quite succinctly; they contain a lot of information and set the stage for what is going to happen next.

With Ermo, we have a strong female character, who wants to find her life’s purpose in her own way. Talk about throwing herself headlong into that! She’s free-thinking, stubborn, courageous and compassionate. She goes through her own journey of self-discovery and enlightenment, nurturing new-found powers and harnessing them in conjunction with a couple of artefacts which were lost and are now found.

Alix Nicole is not really suited to creating voices for male characters but definitely came into her own representing Ermo. All in all, she did a pretty good job of the narration and I enjoyed listening to the story as an audiobook.

I am curious to see where the second book, ‘Enemies of Light’, will take us.

I recieved a review copy of this book. It felt very much like 3 short stories, all interconnected, all providing hints of a very interesting world, but all too short for me. Just as I would get interested in where a story was going it was over and we moved to the next one. Having said that the story elements were intriguing and the narration was excellent so I am looking forward to seeing where the next book takes it.

this is a interesting enough start of a series, slightly let down by being quite short and having to jump forward rather fast to get to the next stage every time. The main character is quite engaging and even though she sort of gets her "powers" handed on a platter, is quite likable. The good/evil divide is quite black and white, but not out of place for fantasy.

Narration is decent if somewhat monotone at times, it gets better when the main character switches to female and the narrator gets up to speed.