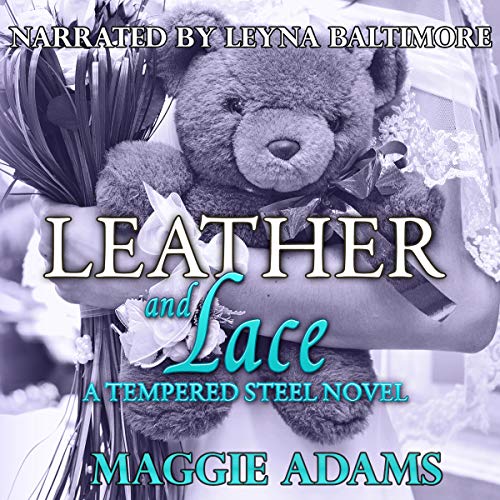 By: Maggie Adams
Narrated by: Leyna Baltimore
Try for $0.00

In the second novel of the Tempered Steel series, second brother Sam Coalson, ex-Navy SEAL, has returned to Grafton for the wedding of his brother. After being run out of town 15 years ago for a crime he didn’t commit, he’s determined to claim what is rightfully his and take on anyone crazy enough to try to stop him.

Angel Devereaux is smart, sexy, and definitely on Sam’s blacklist. After siding with Sam’s enemy 15 years ago, Angel can’t help but wonder what if...what if Sam had never left? What if he could forgive her now? She had her reasons, but he won’t listen. So enough with words. Sometimes action is exactly what’s called for.

What listeners say about Leather and Lace

A Beautifully Orchestrated Symphony of Emotions

This was my first novel by Maggie Adams and I am very pleased and will definitely read more by this author! I found this book looking for 2nd chance romances. This book has all the feels! Angst, warmth, love, fear, sadness, etc. I loved the overall plot and pacing so much I couldn’t put it down and binged the entire thing in under 24 hours! Loved, loved, loved it!

Angel and Sam have been in a relationship since ahe was in high school. Her father did not agree with them being together and tore them apart. Fifteen years later and she is still fighting for Sam, he mistrusts her and wants nothing to do with her. Can his family help them get together and fight off the family enemies.

My only regret is not having listened to Volume 1 and now I need to hear Volume 3. Great story with suspense and love all wrapped into one. Narration was spot on for me.

I was provided a free copy of this book from audioboom and am leaving a voluntary review.


This is the second book in Maggie Adam's TemperedSteel series, the first book I've read or listened too and it worked well as a stand alone story. This was the first time I've read this author or listened to Leyna Baltimore's narration and I found it a very enjoyable stories. Maggie Adam's plot twist kept me interested and Leyna Baltimore's narration added to the intensity of the story. If you like well developed characters stories that keep you wanting to learn more delivered with precision this books for you. I must add that though Sam and Angel get their HEA I was unaware that the "mystery" element was not going to be resolved in this story.
I gifted a copy of the audio.

New author and narrator for me. This 2nd chance romance has a underlying mystery in the mist of the explosive chemistry of the characters.

"I was given this free review copy audiobook at my request and have voluntarily left this review." I missed volume 1 so I was unsure about what to expect with this book . I thoroughly enjoyed this book , I found it fast moving with various twists & turns . I was not sure what was going to happen next & that added to my enjoyment . I enjoyed everything about this audiobook & the narrator did an excellent presentation . Now I have to go listen to volume 1 .

Great book 2 in the series. I enjoyed hearing Sam and Angel's story. More mystery, drama, surprises, suspense and a great happy ending for these two. Looking forward to hearing the next story in the series!
I was provided a free copy of this book from audioboom and am leaving a voluntary review.

This book is so good. The storyline will keep you interested to see what happens.cant wait for the next book. I need to know what happens next.
I was given this book for my honest review.