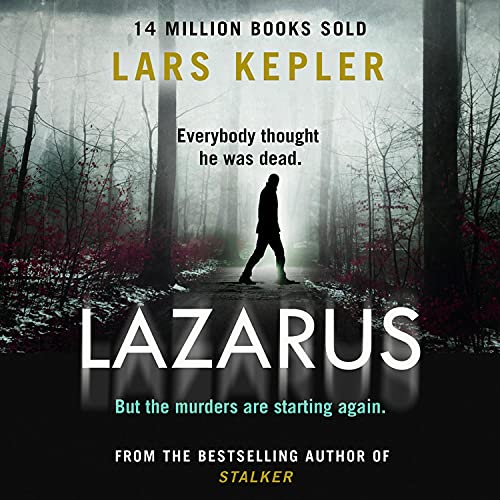 The most chilling and terrifying serial killer thriller of the year, from international best- selling author Lars Kepler.

Jurek Walter was shot and killed years ago. The police moved on and managed to forget the darkness that had tainted their lives.

Has come back from the dead.

But now someone is leaving a trail of broken bodies across Sweden, and the clues all point to Walter. Detective Joona Linna is convinced his worst nightmare is becoming a reality: the man who tore apart his family has returned to finish the job.

He doesn’t just kill you. He buries your loved ones alive.

When Joona’s partner is taken - and locked inside an underground coffin - he finds himself with an impossible choice: leave her to die, or walk into the trap set by the only man he ever feared.

"It may take you a while to sleep after you finish it." (Daily Express)

"Wraps you in a cloak of darkness." (Daily Mail)

What listeners say about Lazarus

"Gripping" and "page turner" are understatements

"Gripping" and "page turner" are understatements! This is one of my favorite Scandinavian series read by one of my favorite narrators. Just when you think they have written their best, the husband and wife team known as Lars Kepler produce another stunner. This is a carefully crafted and well ballanced book, with solid character development and a diabolical plot that just keeps surprising. A thought to be dead villain re-emerges to kill, maim and bury people alive and no-one is safe including Joona and his friends and family. Straight into the top tier of my library. If you haven't heard of this series you really are missing out on something special.

great story as usual from Kepler. really enjoyed this book, kept me on the edge of my seat throughout.

Very exciting story. Could hardly put the book down. Makes you scream no no no!

AMAZING right to the end!

Loved this! Best I've heard in a while, and I do love the narration by Mr Reichlin, he has a voice that delivers a story like this so effectively. I almost had to stop listening at times because the suspense was so well done. 10/10 🌟

Narrator was excellent, another great book of Lars Kepler, can't wait for another book to come out.

The suspense is real

Fantastic writing and as always epic narrating by Saul Reichlin. Definitely one of my favorites in the Joona Linna series!

Loved the book but the narrator was dire he made the main character sound like the chef from the muppets bring back Sean barrett!

If I hear the word 'sweat' one more time I'll scream until I perspire.

My god? I love Kepler books, but this audible, this voice...as he reads all the character's sound like an old farmer?! how could any one serious relise this for a buy?!

such a good and fast paced book, loved every bit of it, but oh sweet baby jesus, VALERIA you absolute idiot!!!

I enjoyed every.single.word. worth the two years wait for this sheer brilliance. enjoy it.