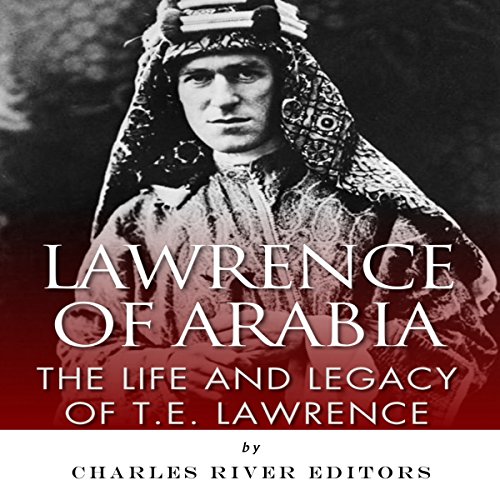 By: Charles River Editors
Narrated by: Ken Teutsch
Try for $0.00

He was recognized by many as a curious scholar and archaeologist, brilliant linguist, British soldier, extraordinary adventurer, and avid writer, though he called himself an "ordinary man". He was a gifted translator, a shrewd diplomat, a brilliant tactician, and an instinctive leader. T.E. Lawrence, more popularly known as Lawrence of Arabia, was a seminal figure in the shaping and reshaping of the politics of Arabia in the early 20th century, serving as an expert in Arab affairs in the British military and playing a key role in the Great Arab Revolt of 1916-1918.

World War I, also known as the Great War of 1914-1918, was one of the deadliest conflicts in human history, leading to the deaths of millions of soldiers and civilians, and it was a war that produced too many casualties and too few heroes. However, after the war was over, the world was told of the blonde-haired, blue-eyed British officer named Thomas Edward Lawrence, and his experiences in Arabia during the fighting. Pictures of Lawrence in a flowing white robe of Arabia's Bedouin tribes were distributed, and Lawrence's autobiography, Seven Pillars of Wisdom, further catapulted his fame and sensationalized his public image. Lawrence's story served to boost the spirits of many who were struggling to recover after the tragedy of the war.

It is telling of just how remarkable the tale is that the world’s fascination with Lawrence of Arabia has endured today. Articles, books, films, and documentaries about Lawrence and his exploits are continuously released on an annual basis. Historian Phillip Knightley once commented, "Along with Winston Churchill, [T.E. Lawrence] remains perhaps the best-known Englishman in the world." Decades since the end of the war, and with a completely changed Middle Eastern geopolitical landscape, Lawrence of Arabia and his legacy are still remembered and referenced as politically, militarily, and socially pertinent.

However, Lawrence was by no means everything he claimed to be. Like many great men touched by fame and celebrity, he exaggerated some details, underplayed others, and strove to maintain an image of himself that he had created in his own mind. Thus, Lawrence was and still is a very controversial figure. He was the first in the 900 year history of the British monarchy to refuse a knighthood, and the film Lawrence of Arabia, starting Peter O’Toole as Lawrence and widely lauded as a masterpiece, was banned in many Arab and Middle Eastern countries, including Jordan and Turkey. Turkey especially has long vilified Lawrence, questioning the veracity of many of his accounts. Just recently, in October 2014, Turkish President Recep Tayyip Erdogan went so far as to declare T.E. Lawrence a greater enemy than the radical terrorist organization that is operating in Iraq and Syria, the Islamic State (IS). In a furious anti-Western diatribe, Erdogan described Lawrence as an "English spy disguised as an Arab", and he warned of the threat posed by modern-day Lawrences in Turkey "disguised as journalists, religious men, writers, and terrorists" who are allegedly aiming to destabilize the country and region.

What listeners say about Lawrence of Arabia