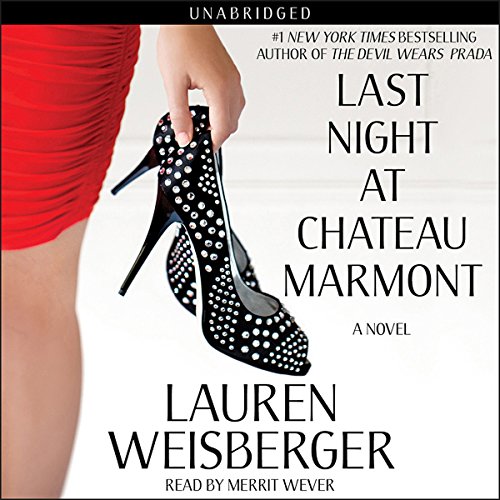 By: Lauren Weisberger
Narrated by: Merritt Wever
Try for $0.00

Brooke loved reading the dishy celebrity gossip rag Last Night - until her marriage became a weekly headline, that is.

Brooke was drawn to the soulful, enigmatic Julian Alter the very first time she heard him perform “Hallelujah” at a dark East Village dive bar. Now five years married, Brooke balances two jobs—as a nutritionist at NYU Hospital and as a consultant to an Upper East Side girls’ school, where privilege gone wrong and disordered eating run rampant—in order to help support her husband’s dream of making it in the music world. Things are looking up when, after years of playing Manhattan clubs and toiling as an A&R intern, Julian finally gets signed by Sony. Although no one’s promising that the album will ever hit the airwaves, Julian is still dedicated to logging in long hours at the recording studio. All that changes after Julian is asked to perform on the Tonight Show with Jay Leno—and is catapulted to stardom, literally overnight.

Amazing opportunities begin popping up almost daily—a new designer wardrobe, a tour with Maroon 5, even a Grammy performance. At first, the newfound fame is fun—who wouldn’t want to stay at the Chateau Marmont or visit the set of one of television’s hottest shows? Yet it seems that Brooke’s sweet husband—the man who can’t handle hot showers and wears socks to bed—is increasingly absent, even on those rare nights they’re home together. When rumors about Brooke and Julian swirl in the tabloid magazines, she begins to question the truth of her marriage and is forced to finally come to terms with what she thinks she wants—and what she actually needs.

"Weisberger has insightful takes about the price of success in our celebrity-obsessed culture." ( Publishers Weekly)

What listeners say about Last Night at Chateau Marmont

I'm really enjoying this story and love the characters, Brooke and Nola. This is right up there with her other novels. I love the humor and the serious lines as well. The only thing I can't enjoy is this reader - it's 'ok' but she really doesn't enunciate some words and it sounds rather unprofessional for a book reader. Example: "impordent" instead of pronouncing "important". Other than that, it's a fun book.

Skip this one! Boring!

I had high expectations for this book given it praise and having loved The Devil Wears Prada. The narrator is awful, there's hardly any inflection in her voice. The book is boring, I'm 2/3 of the way through and hardly anything has happened yet. Its been a waste of time and money.

This book needs to be abridged....like, NOW. I'm trying to stay committed until the end, but I just don't know if I'll be able to make it. It's so Boring! Not only that, the writing is pretty bad. The author isn't great with the segues into new chapters/scenes/dialogue. Twice already, I've had to rewind, thinking that I skipped a chapter by accident. But no....it's just a jarring transition into a new scenario--kind of wierd.

The narrator is pretty bad too. Sounds like a first time reader--doesn't really give life to any character. Also, bc she doesn't really distinguish between different male and female voices, it's a little hard to know whose voice she's in at any given moment.

Merritt Wever was Better than the Story!

Don't get me wrong. I like to while away a few hours with chick lit as much as the next girl. I have read Lauren Weisberger before and find her romps just the right mix of fun and frolic. That said, this wasn't my favorite -- but it wasn't bad. I liked learning a bit about the music business, and getting to think about my own tendencies to read the headlines of tabloids at the grocery store. Howver, the story just felt a little bit under developed overall.

That said, Merritt Wever and something about her tone sort of constantly imbues such a real quality to Brooke. As her husband Julian is thrust into super stardom, you can hear Brooke screaming through Merritt's narration ... "are you kidding me with this man-child behavior right now?"

The book seemed to wrap up kind of neatly for me after a requisite period of struggle, but I'm not sure Brooke & Julian actually evolved as much as they just made it through enough pages to be released from their suffering.

One highlight of the book are the song lyrics which really gave a sense of believability to the story of the "one hit wonder," and I am sure I'm not alone in thinking someone should run with them and create a complimentary hit to accompany the book! So that is a real fun element of the book.

Loved the story but the performance from the reader really made it come alive! A must listen!

The story is good but if you don’t like the sound of people’s lips smacking or the sound of people swallowing this book might not be the one for you. I enjoyed the story but found my self distracted frequently by these things. Other than that it was good nothing phenomenal its a great light read.

Another good, easy listen with humor and a fun story line. Romance, modern, and up to date with what our 'real world' stars may actually deal with.

This is Lauren Weisberger's fourth novel and to some extent either you like her style or you don't. The big splash of her first book is that it was a barely disguised roman a clef. In this book Weisberger wants the reader to know she's BEEN to the Chateau Marmont and it is awesome. I'm sure she's met some musicians but she clearly doesn't know enough to really write a character that is actually a burgeoning musician. (Or a nutritionist). If you are a Weisberger fan, this book will be up your alley. Anyone not already familiar with her writing (other than Devil Wears Prada) should avoid.

Couldn't wait to get to the end.

I enjoyed Lauren's smart witty writing and couldn't stop in the middle. That being said, I had a hard time stomaching the self depricating, too sweet, whiny Brook. She had an opportunity to hold onto her dignity and be a supportive loveing wife but she comes off as unable to handle what can truly be a difficult and stressful rise to celebrity. This is a smart women who is written to crumble on impact crying about not spending time with her very talented busy husband to the detriment of her own career. I don't know that I will read another Lauren Weishenberger book with this as example of how she writes women. Wally Lamb, penis and all, writes women made of stronger stuff.

I had to stop with 2 hours left. The story was grating . I don’t even care how it ends