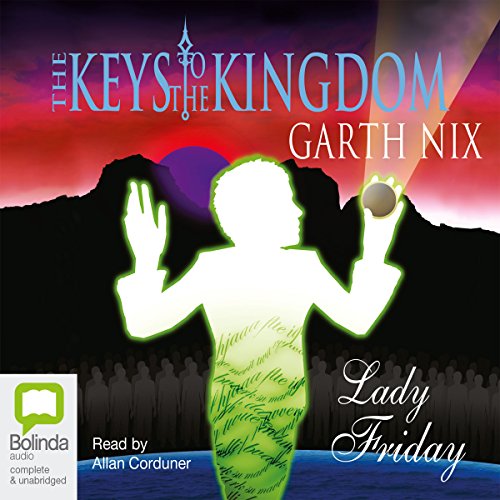 By: Garth Nix
Narrated by: Allan Corduner
Try for $0.00

Lady Friday is the fifth fascinating book in The Keys to the Kingdom series by internationally acclaimed Australian author, Garth Nix.

It's Friday, and Arthur Penhaligon has defeated four of the seven trustees, but his week isn't getting any easier. The Piper's New Nithling Army controls most of the Great Maze, and Superior Saturday is creating danger wherever she can.

Worse still, Arthur is cut off from his home and lvoed ones, and risks being trapped in the House for ever.

Lady Friday tempts Arthur with an unexpected offer - but it is a cunning trap for the Rightful Heir to the Kingdom, or a chance he must seize before Superior Saturday or the Piper snatch it first? Who will win the race to discover the secret of the Middle House?

"Magic splashes across virtually every page... with a likeable unlikely hero, fast-paced plotting and a plethora of mystical oddities, this series is bound to garner many fans." ( Publishers' Weekly)

What listeners say about Lady Friday

it's getting a little hard to keep track of all the machinations and players for the youngest listeners but otherwise an excellent story.

Great as with all the others before it!

The book is a great story about different characters- one for each day of the week and the 12 year old protagonist who against his desire having to take them on. Suzy turquoise blue is my favorite character.

Just like the first 4 this was amazing. Now time for Saturday. Oh, so excited.