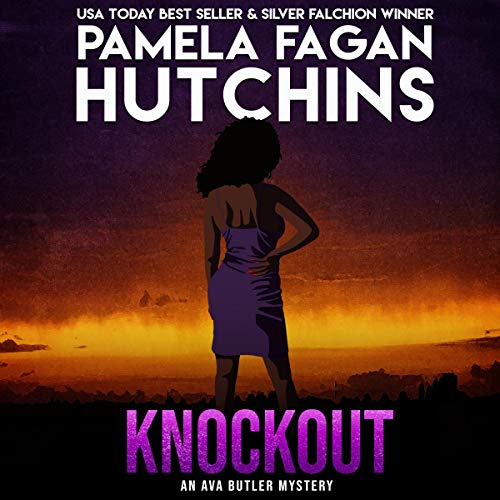 Knockout (Ava #3): A What Doesn't Kill You Romantic Mystery

By: Pamela Fagan Hutchins
Narrated by: Alayah Frazier
Try for $0.00

A controversial tourist resort. An unsolved beachside murder. Does she have the pipes to blow the whistle on a deadly conspiracy?

Everyone wants a piece of Ava’s skyrocketing star power...including her serious boyfriend and her deadbeat baby daddy. But when she visits the future site of a controversial resort and stumbles upon a dead body, Ava thinks she’s finally found a worthy cause for her newfound celebrity. Determined to catch the killer and stop the construction of the eco-unfriendly tourist trap, she plans to put her sex symbol status to good use.

Infiltrating the resort chain gala’s celebrity guest list, she teams up with a heavyweight boxer to dig up dirt on the investors. But her investigation takes a critical hit when her ex sues for full custody. Faced with the possibility of losing her daughter, she may have to give up the flirty persona she’s put to good use in wheeling out secrets from under the noses of corrupt investors.

To solve the murder and save her career, Ava must find a new way to take down the multi-million-dollar nest of corruption before her dead body joins the construction heap.

What listeners say about Knockout (Ava #3): A What Doesn't Kill You Romantic Mystery

I love the what doesn't kill you series! All of the books keep you guessing what's going to happen next. I suggest and recommend the whole series to anyone what loves a good who done it!

Ava Is Fighting Back

Ave place in the lime light, and finding a dead body at the resort, or an ex wanting custody of your child isn’t good. In investigation she finds corruption and she is taking charge to stop the building, a different Ava
Given audio for my voluntary review and my honest opinion

Sometimes you could not tell if it was a women or mans voice. Loved this story. A lot of involvement

Ava is turning in to a lioness and she is fierce!!


Another murder, another song, another stalker, another day in the life of Ava but this is the new and improved lioness Ava and she is taking charge this time! Taking charge of her career, her crazy baby Daddy, the destruction of her island, her relationships and her family and she ROCKS it!

I love Pamela's characters so much because they are so real! They are flawed. They are fun. They are life!

Trust me and pick up these fun, cozy, a little sexy, murder mysteries and escape!

I want to read them all! Enjoyed the narration

Even having read the blurb, I was unprepared for everything involved! Ava gets hit from all sides and has more to deal with than one person (or a team) should possibly at the same time.
From family health worries, to stumbling across a death (or murder,) a change of career environment to actual environmental battles, there is so much going on your head will spin. Poor Ava!
And strange men watching and following her at every turn. Everyone wants something from her, now that she is in the spotlight, including pirates.
I really enjoyed the narration and dialect.

I am not reading this series in order but was not lost, as long as I could focus. There is so much happening and Ava is being pulled in so many directions, of course with fans and Paparazzi alike watching. Of course I want to read each book in the series now.

This was my first experience with the What Doesn’t Kill You series, and as it is book three in Ava’s story, I can’t help but think I should have listened to them in order. That being said, even though I was missing the background information, I was able to pick up enough of the details and enjoy this story for what it is. I liked the fact that the lead character, Ava, seemed very real... she’s obviously a strong woman, but she does have her flaws and weaknesses.

Alayah Frazier’s narration was very well done. I think she had the perfect voice for Ava.

This was such an enjoyable listen, I’ll be checking out more of Pamela Fagan Hutchins’ stories.

Three stars, but it's probably my fault

It's never wise to begin by the end of a series :/

Okay, I haven't read the first two books in this series, and this fact undoubtedly influenced my enjoyment of the story, as I kept missing bits and wondering about what happened before. It's a shame, too, as I'm quite sure the story deserves more than what I can give it.

Ava is an interesting character, trying to keep herself going while dealing with a lot of baggage. Her doubts about how good as a mother she is will ring true to anyone who is a parent, and makes her even more real to the readers.

The mystery is mostly background, the book is more centred in Ava's life, and how she fights against... well, a lot! Environmental's danger to her loved island, custody on her daughter, relationship problems, and, if that wasn't enough, a musical tour as the cherry on top :P

Alayah Frazier does a great job with the narration.

A day in the life of a celebrity

A look into the life of a singer who has detached herself from being owned by the big guys. No one is perfect or exempt from messing up and making mistakes. Ava is just another young woman who is merely a drop in this musical world. It seems very realistic and very hard to stomach, really, but so true to life as well. Well written. Love the narrator's ability to bring each character to life.

I quite enjoyed this snippet of Island life and the glimpse into the world of music. The murder did seem to get brushed aside what with Ava recording a new music album and rushing around New York to make it happen but I did enjoy the characters and the familiarity between them all. This is book three and it obviously carries on from the previous books but it was still easy to follow on and didn't matter that I didn't start with book one.
Ava has broken away from her record label and has enlisted the help of her friends to help her make a record she can be proud of. However things aren't that easy as she finds a dead body floating in the water of her favourite hangout out spot and to make matters worse she knows the man and calls him a friend. She barely has time to come to terms with his death before she is traveling to New York to start recording the album, an ex boyfriend attaches himself to her entourage, her current boyfriend is having major problems at work, her daughter's father is making noises about having her back in his life and a land developer is stirring up ripples on her home Island causing friction between her and her friends and her family is out of touch leaving Ava feeling home sick. Then another body turns up and even her bodyguard is worried about her safety . It's a good job what doesn't kill you makes you stronger.
The narrator had a nice easy way of speaking just right for what I imagine Island life is like.