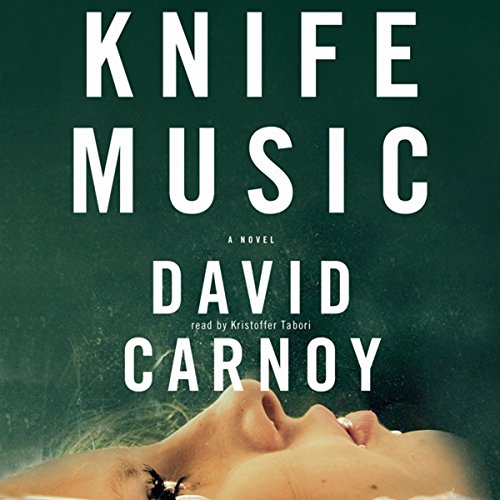 Kristen Kroiter was 16, a high-school sophomore, when she was injured in a car accident. Dr. Ted Cogan had saved her life when he treated her in the ER six months ago. But now police detectives were questioning Cogan about her, in intimate detail. What was going on? What had she told them?

That’s just it, the cops said. She hadn’t told them anything. She had died. Looked like a suicide. And Cogan was in a heap of trouble.

Tense and twisting, Knife Music is the story of a doctor struggling to clear his name after being accused of raping and causing the suicide of a young girl. The novel pits Cogan, a 43-year-old surgeon and self-described womanizer, against Hank Madden, a handicapped veteran detective. From the outset it’s not clear who is victim and who is victimizer, as the usually dispassionate Madden grapples with his long-suppressed prejudices and his obsession with bringing Ted Cogan to justice at any cost. It all leads up to the most stunning surprise ending since Scott Turow’s Presumed Innocent.

Highs and Lows of Knife Music

I really enjoyed the narrator of this book. He was a good strong reader, and was able to keep me entertained enough to keep going to the end.
The book started out strong - it really kept my attention as the suspense and plot were building.
However, the book became less interesting to me as it meandered through the various interviews with witnesses, and thoughts of the main character. It started to feel a bit pointless along the way.
I did not give up on the book though (as I have with other audio books) because I really did want to know what happened in the end.
I think this is a good author who should edit a bit more tightly the next time around.

This is a wonderful interpretation of human nature first by David Carnoy, then the interpretation of his interpretation that Kristoffer Tabori executes intriguingly. Odd thing here though. Normally in cop/mystery novels the villains are more complex than the protagonists... Not so here and Carnoy's created at least two of the latter. Okay, I wish that the bad dudes/dudettes were more than brush-stroked in from a list of things-that-make-killers-do-what-they-do... BUT... BUT... this read totally works. The Doc and the Cop both rock... and the continuing epilogue-like endings add hot layers of memory for the listener.

A small warning though. Carnoy is NOT linear. He does not go chronologically at this story. Maybe that technique might work a tad better in print where the reader can drop back a couple of pages from time-to-time to stay oriented. Here you need to be alert as a reader and pay attention to the author's notations of time and date.

After a while I found the technique interesting-making, but I wish someone had warned me in advance... Hope this will help you as you listen. How much did I like it? I've already downloaded the next in Carnoy novel. That's how much :-)

Loved the narrator. The story was good. Would definitely recommend if you're looking for a fun, twisty mystery.