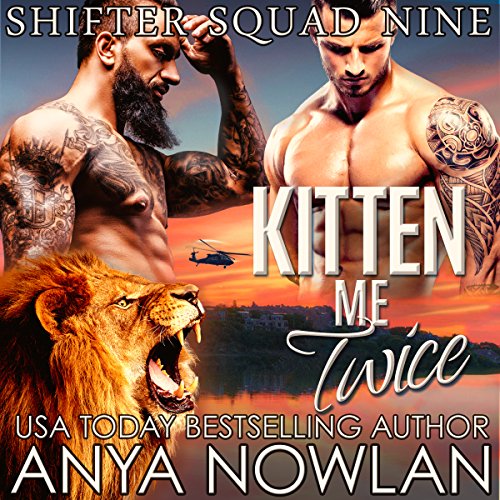 By: Anya Nowlan
Narrated by: Beth Roeg
Free with a 30-day trial

Two's always better than one...but they're also harder to get away from.

Kayla Malone has been running for most of her life. First from her problems, and then after their solution. As the mother of twin boys taken away from her as suddenly as she lost their fathers, she thought she'd never see her kids, or the men she loves again. But she never stopped fighting for it.

Ryker and Rio Tyren have pasts worth boasting about, though only to those who can stomach the destruction that comes with it. Trained Navy SEALs honed for death and carnage, the werelion twins are deadly at what they do, and it's the only thing they have left to live for. No wonder they take such f--king glee in it.

Only when they learn that they have something left to fight for - a woman they thought lost, and children they never knew about, do these men need to reconsider their paths. Keep going down to hell, or start fighting for a way out?

Or maybe down is exactly where you need to go to get up again?

Kitten Me Twice is the second book in the Shifter Squad Nine series. There's no cheating, a guaranteed HEA, and plenty of steam. It can and should be listened to as a stand-alone. If you want your alphas hard and dangerous, and your heroines capable and curvy, this is just the book for you!

What listeners say about Kitten Me Twice

This is a fun little romp of a were tale. Werecat brothers witness their family being slaughtered along with all the members of their pride, when they are children, by hyena shifters. When they are grown Ryker and Rio Tyron, trained Navy Seals, work for "the firm" as part of Shifter Squad Nine. They travel the world taking on the worst of the worst.
After a mission they are reunited with their mate, a human, named Kayla Malone. They had been parted from Kayla for many years and both Kayla and the twins misunderstood the reasons for their parting. Kayla has two sons who are kidnapped and she needs the help of Shifter Squad Nine and her mates to bring them home.
After their sexy reunion the fighting begins. After their struggles I got my HEA. This book was narrated by Beth Rodgers who suited the story very well. I will listen to this author and narrator again in the future. If you like a quick, steamy Shifter romance this is definitely the listen for you!