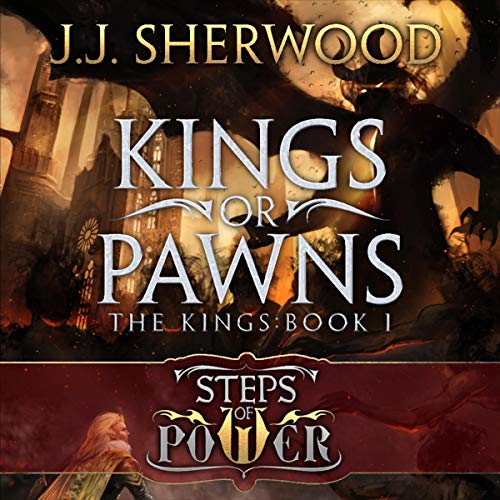 The elven city of Elvorium has become corrupted to the core by politics. With his father dead and The Royal Schism at his back, Prince Hairem becomes the king of the elven world on Sevrigel. Young and daring, Hairem is determined to undo the council's power, but quickly finds his loyal council members brutally murdered by an assassin loosed within the city. As corruption and death threaten to tear the city apart from within, the warlord Saebellus threatens the city from without, laying siege to Sevrigel's eastern capital. With the elven world crumbling around him, Hairem finds himself in a dangerous political balance between peace and all-out war.

What listeners say about Kings or Pawns

I absolutely loved this book, it had lots of things intrigue, romance, treason and more it was so delightful. I usually dont like books about politics but this one seemed so different from that. everyone should read this series is so absorbing and the characters so interesting that they will arouse lots of feelings in you.

If you could sum up Kings or Pawns in three words, what would they be?

Epic, intriguing, page-turner (oops that's three and a half)

What was one of the most memorable moments of Kings or Pawns?

Without getting too spoilery, the character Alvena was extremely memorable. Alvena is a handmaiden to the king, and she's a very unique character. She's quirky, determined, kind, mischievous, and fierce. And she's strong--she has one particular "disability" that she refuses to let define her. I also enjoyed the character Ilsevel. The society that she lives in is patriarchal, and Ilsevel enters the story as a nobleman's daughter who sincerely wants to enter the political world and fix the corrupted system, but isn't "allowed." So instead, she finds ways to work through and around the system to being to make her mark on the city and effect change. She's extremely shrewd, and uses the fact that the men around her underestimate her to her advantage.

What about Matthew Lloyd Davies’s performance did you like?

His performance was very dynamic! He had a great range of voices, and I was really impressed that he even gave particular accents to characters depending on where they lived. (Eg all the elves who lived in the north spoke with the same accent, but different voices, etc.) He had the kind of voice that you could just listen to, not even needing to multitask while listening haha. The one thing is I had to turn my audio up loud, because sometimes his narration got quiet (like when a character was muttering or whispering something).

Definitely! Not that I could because it was 14 hours, but it kept me wanting to hear more. Especially at around 3ish hours in. The book was part epic adventure, part thriller. Half of the story focuses on the corrupt politics going on in the elven capital--the ruling council is corrupt, and there is an assassin killing the remaining "good' people. The other half focuses on the general of the army, who is leading a war against a rebel warlord. It was all very exciting, and still contained a good amount of world-building to create a fully fleshed out universe.

My favorite part of the book was the depth of the characters. Each of the characters are fully fleshed out with their strengths and weaknesses, hopes and aspirations. I was able to connect with the characters and cared what happened to them, regardless of where the story was going. Kings or Pawn's style is third person, but is told extremely from the POV character's head (the chapters switch characters). The author spends time delving into who these characters really are and what motivates them--there are no surface level characters in this book. Their personalities really leapt off of the pages!

"Kings or Pawns" is a Masterpiece

J. J. Sherwood brilliantly introduces a fairly large cast of characters in a way that allows the audience to easily see their personalities while secreting away some of their hidden agendas. The reader easily comes to know the elves of Elvorium, yet suspicions arise with subtle hints that still amaze with shocking realization when situations prove otherwise. Whether reading, or listening to the audio, one is drawn into the Elvan world of honor, intrigue, love, and betrayal with artful storytelling that will make you want to run out and sharpen your sword while feeling the emptiness of lost comrades. “Kings or Pawns” is an excellent story. My only complaint is that the sequel is not yet in my hands.

Yes! Read this! High fantasy, a new world, magical creatures, lies, mystery, murder and intrigue! A book I can totally stand behind. Sherwood's first published piece is well crafted and filled with emotion.

The characters are powerful and endearing and the setting, vivid. Saebellus is a menacing villain and the heroes are believable. I can't wait to read the second installment!

Which character – as performed by Matthew Lloyd Davies – was your favorite?

I enjoyed Davies' performance for Alvena the most.

Spoilers!!!
A moment in the book that is particularly moving is when Jikun visits Navon in prison. He humbles himself and admits his failure as a friend and "brother". This particular scene is very intense emotionally.

Check out my blog post on storyrealmblog.wordpress.com for a longer review! And stop by JJ Sherwood's web page for more info on her Steps of Power blog tour! stepsofpower.com

This book broke me!

Would you listen to Kings or Pawns again? Why?

Maybe, even though I'm not very good with re-reading books, but I really liked this one, so I might give it another go.

What was one of the most memorable moments of Kings or Pawns?

well that would be a spoiler, so I really can't mention it.

What aspect of Matthew Lloyd Davies’s performance would you have changed?

In a case of this book - nothing, although the "accent" he was trying to perform for Jikun was a bit strange and not very fitting. Other than that, I'll be glad to listen to his reading of the second book.

Jaw dropping - a serious case of that. And shock. Lots of it. And at the end I just fell down to my bed and lied there for a whole deciding what to do with myself.

This book broke me!
Smashed my heart, took my hopes, mixed them with mud and threw into the sewers...

I don't know what to do with myself now
I'm just gonna lie down for a while (a few days should do) and think of nothing
And don't even tell me to go to work tomorrow, I'm in no condition to do so. I bet my doctor would sign up the sick leave, right? If not I'll make her read the book and she'll sign one for herself too!


OK,now to the more serious review. I admit it took me a while to fully get into the story. The beginning might've not been so exciting, but it was a good introduction to the world, the main characters, and their current situation. The whole thing felt a bit like a mix of "Song of Ice and Fire" and "Legends of Drizzt", and by that I mean it well deserves a place on every fantasy-lover shelf! It's well written, has some exciting battles and even the political struggles and plotting were interesting (that's something I don't say often).

And the moments that crushed me? I really can't tell you without spoiling everything. I admit, I kind of felt some of these might happen, but not all! And not like THAT!
I need the next book....

Do yourself a favor and read this!

Oh, and the audio version is quite good. At first I though the narrator might annoy me with his a bit posh way of reading and some of the accents he was acting, but actually, it all fits, so I'll be happy to listen to him again as long as it's in a similar type of books.


I received this book from the author in exchange for an honest review... because she knew what it will do to me ;)
Take a loot at my reviews at https://maginibooks.wordpress.com/

As a fantasy fan I really enjoyed this book! Has a good story and interesting characters. If you are a fan of the fantasy genre you should give this a listen.

If you could sum up Kings or Pawns in three words, what would they be?

I am usually pretty picky when it comes to audiobooks because I have a hard time staying focused on listening and my mind does tend to wander. I have had no issues listening to this one. I love the story and I enjoyed listening to the narrator.

This is one high fantasy series I want to continue reading .

If you love high fantasy, I think you will love this book.

I couldn't stop listening to it.

Would you listen to Kings or Pawns again? Why?

Yes. The plot is intricate enough I would be interested to see what new perspective I found in listening to the book again.

What other book might you compare Kings or Pawns to and why?

What about Matthew Lloyd Davies’s performance did you like?

I think Lloyd did a great job of giving each character a unique voice.

Like any new author, there are things to improve upon, but Sherwood spins a fantastic tale with description seasoned writers can only dream to replicate.

The last half of the book made it worth listening to. Will definitely purchase book 2 when available.
Interesting magic (although not used a lot) but more so the main characters really made the story.

loved it. sex violence, and intrigued! I wish Tolkien would have had more of this with his elves.