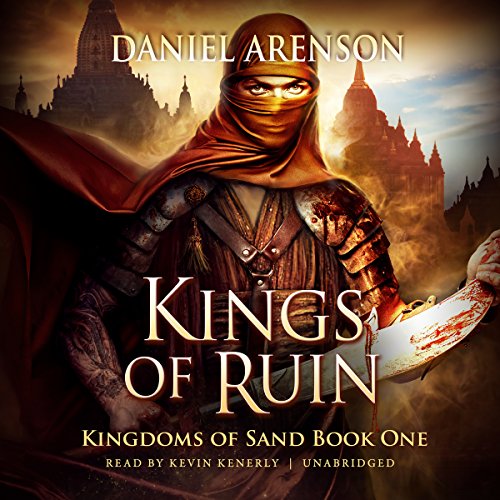 By: Daniel Arenson
Narrated by: Kevin Kenerly
Try for $0.00

In an ancient world of sand and splendor, an empire awakens.

Aelar, a mighty nation, spreads its tentacles. Its oared galleys storm the seas, and the waters run red with blood. Its legionaries swarm desert ruins, smiting barbarian hordes. Its crosses line the roadsides, displaying the dying flesh of heroes.

The powerful Sela family has avoided the empire until now. The family has carved out an idyllic life between sea and desert, ruling a bustling port, a thriving city, and lush vineyards. Yet when an imperial fleet arrives in their harbor, everything the Sela family has built threatens to collapse.

Sweeping from snowy forests to cruel deserts, from bazaars of wonder to fields of war, here is a tale of legionaries and lepers, priests and paupers, kings and crows. Here a girl travels across endless dunes, seeking magic; a cruel prince struggles to claim a bloodstained throne; and a young soldier fights to hold back an overwhelming host. As the empire spreads, the fate of the Sela family - and of all civilization - stands upon a knife's edge, for under the storm of war, even the greatest nations are but kingdoms of sand.

What listeners say about Kings of Ruin

Lots of vulgar language and sexuality

The Author seems to have skill but like?? using it is difficult? After getting farther into it it starts getting really clear really quick that its the same descriptions of everything over and over again. Its like there was an attempt at being poetic, but it just came off pretentious as all hell instead. I got so tired of being told over and over again the same exact things about every character. We get it, the youngest son died after living only a day and one of the daughters is a lioness and seaside whores suck cocks. Its preformed well enough, but that can't make the fact that its dry and repetitive any better.

Descriptions of people, places, phrases, etc. repeated from every characters' perspective without variation. This book could have been one chapter. Purchased based on other reviews, but I will not continue this series. On a positive note, the narrator did a great job.

I hate it when the lead characters act stupidly.

I don't want to read books where so many of the lead characters make blatantly stupid decisions. Clearly people make bad choices and that is often what leads to crazy circumstances and struggle. However this was too much. I felt no sympathy for the royal family. When there is a freight train coming at you. You get out of the way. If you throw yourself under its wheels hoping to slow it down, then you get what you deserve.

ridiculous story. the legion and empire obviously based on the Romans. why would trebuchets be on ships hurling flaming munitions. they would set their own ships on fire. seige towers build in a day? even worse tunneling under walls or building a seige ramp in a couple of days. that could not even be done in weeks with modern machinery. imperial troops emerging from tunnels with their tower shields. the shields wouldn't fit. author makes a great deal about the discipline of the troops but the first thing they do coming through the tunnels is run around and pillage instead of seizing and opening the gates? the author tried to make the hero honorable and give him the moral high ground. he was nothing but weak and stupid and deserved to die. the whole concept of bringing thousands of slaves seized 20 years ago back to attack their homeland is also completely ridiculous. the whole family just needs to die.

Mostly well written and the narration itself lends itself to quite an atmospheric Roman-theme inspired tale, the sex scenes were definitely the highlights 😂 , the story and magic systems - a little flat and used in other books before. Not bad, worth a listen, will listen to the sequel.
3 Stars: ***.

Good for fans of babies getting speared

3/4 of this book is battle scenes. this author seems to really like to murder babies in really gruesome ways. and pregnant women and mothers and old people and dogs. He's also a fan of violent sex. torture, and of overly mawkish sentimental loving diatribes between the "good" family members. not much else. almost no character development. and if you're looking for magic, it is virtually non-existent. I can't imagine how anyone can like this book.

Strange take on GoT

Meh, the story is ok. The author uses vulgarities to cover up his repetitive descriptors, and overall lack of story development. It’s full of proud lions, roaring lions, the light this and the light that, and don’t forget the ruthless eagles that somehow are tougher than lions🤷🏽‍♀️ Honestly idk if I’ll bother with the next books.

It's a set up book

Kings of Ruin is defiantly a set up book. I'm glad it's part of the series because it does set up the world and conflict for the next books well.

Ophier (that may not be the right spelling) is my least favorite character and I really wanted to DNF in the beginning because of her. I'm glad I pushed through but yeah I don't care what revolations she has at the end she's a whiney little baby who needs a good whipping.