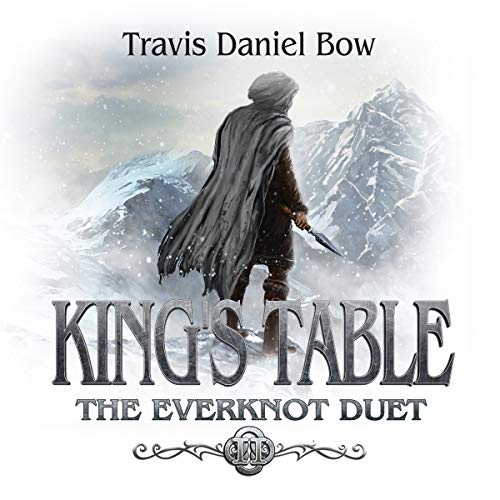 A condemned rebel fights in the gladiatorial death-rings until the most infamous traitor living ropes him into a web of plots, lies, and deception.

Becoming a Thane - an elite rebel spy trained to deceive, manipulate, and kill - was Timothy’s life. He was driven. Obsessed. Fanatical. Then, in a moment, he lost everything.

Now Timothy fights for survival and revenge in the Huctan death rings. When his recklessness and skill take him all the way to the Huctan capitol, he finds himself enmeshed in a deadly game of lies and deception.

While his brother leads a last desperate rebellion in Botan, Timothy must rub shoulders with the Huctan princess, match wits with the man who betrayed his country, and navigate the plots, duplicity, and tests of loyalty that could decide the fate of his nation.

The thrilling, twisty conclusion to the Everknot duet

What listeners say about King's Table

AN AMAZING STORY AND A FANTASTIC LISTEN!

This story is the perfect mix for me. Fantastic world building elements but not too heavy that it's hard to follow. Lots of interesting characters but not too many I couldn't remember who was who. And a great diversity in plot to keep things exciting and varied. I loved this book!

The reading was great with clear voices and great characterization consistent all the way through. The pacing was great and I especially liked the variation in having two different readers for the two main plot lines. The interview at the end with the author was really cool too! PLEASE WRITE MORE!

Fantastic writing. Not my genre but I was glued.

Full disclosure, I know the author and read his first in the duet even though it wasn't SciFi. Well, I had to hear the end of the story from Thane, book one. But I really got wrapped up in the story. Travis does a marvelous job with the twists and intrigues and really keeps you guessing how all of this is going to work out. I would even like a third book in this series to continue the story--a trilogy instead. Having Andrew help with the reading helped the performance.

Amazing! Even more gripping than the first!

Loved listening to it a second time! Caught many things I missed the first go. Can't wait for more from this author!

Great conclusion to the duet

I really enjoyed the conclusion to this series. the story kept me guessing and it didn't turn it the way I expected. which I think was kind of the point for a book like this so mission accomplished there. I would definately read his future works. for a first novel I would say it is a great accomplishment.