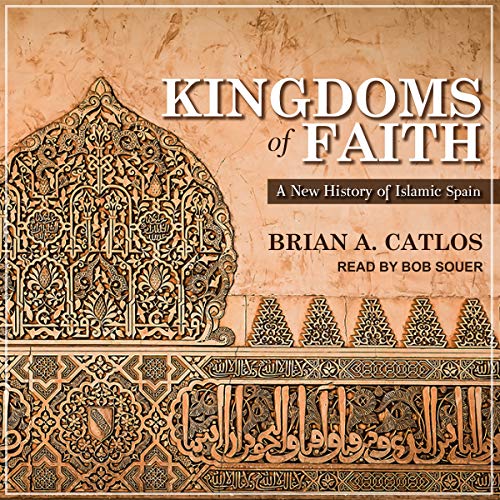 A magisterial, myth-dispelling history of Islamic Spain spanning the millennium between the founding of Islam in the seventh century and the final expulsion of Spain's Muslims in the 17th.

In Kingdoms of Faith, award-winning historian Brian A. Catlos rewrites the history of Islamic Spain from the ground up, evoking the cultural splendor of al-Andalus, while offering an authoritative new interpretation of the forces that shaped it.

Prior accounts have portrayed Islamic Spain as a paradise of enlightened tolerance or the site where civilizations clashed. Catlos taps a wide array of primary sources to paint a more complex portrait, describing how Muslims, Christians, and Jews together built a sophisticated civilization that transformed the Western world, even as they waged relentless war against each other and their coreligionists. Religion was often the language of conflict, but seldom its cause - a lesson we would do well to learn in our own time.

What listeners say about Kingdoms of Faith

Especially thorough in outlining the important transitions of power. Not as much attention paid to what the Christian Kingdoms were doing in the early times, and the Jews are only sporadically mentioned in relation to Muslims and Christians.
I was most surprised by the downplay of programs. Prof. Catlos asserts much of the violence against Jews was politically, not religiously motivated, and therefore should not be labeled "pogram." I need to give this more thought.

As other reviewers have said, the history in this book is excellent. It gives a great concise history of Al Andalus, or Islamic/Moorish Spain. I have to also agree with them about the narrator however, there are chapters in which you can clearly hear the narrator take a deep breath around the middle of the chapter, no matter what volume level you have the book at. There are also moments in the book where it sounds like the narrator is chewing gum. Again book is great, but should have gotten a better narrator.

Maybe better read than listened to

I really enjoyed this book. It's a detailed look at a period of history that I was not very familiar with, though certain popular stories and myths from that period are widely known. It's fun to learn in depth about the political organization of the city-states and empires on the Iberian Peninsula, in Western Europe, and the Middle East and N. Africa, and how they all mixed together in Iberia, as well as the cultural and technological developments there during the middle ages.

The level of detail (extreme), the pacing of the narration (way too fast), and the audible inhalations and exhalations of the narrator, as well as the monotonous tone are probably going to drive most listeners crazy. I'm a history major, fairly informed about world history, and I still found the narrator difficult to follow and the monotony to be difficult to bear. This is the only audio book I've ever listened to at .75x speed, so that I could keep up with all of the unfamiliar names, events, geographic descriptions, and so many other details. I don't think this audio book is good for even many history buffs, and is probably more enjoyable as a physical read if you have the time. That said, it appealed to me personally, and will to others who don't mind the dryness and terrible narration.

The history is detailed and its overall argument is convincing: that convenience and material self-interest, not religious zeal or toleration, were the dominant forces in medieval Iberia. The narrator is monotonous.