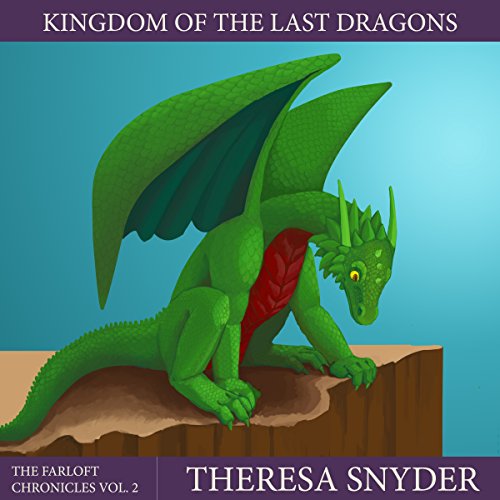 Kingdom of the Last Dragons

By: Theresa Snyder
Narrated by: Mary Sibulsky
Try for $0.00

Will the Zonguldak Ruby place the Kingdom under its Spell?

The Healer, Theresa, has returned to the Kingdom after a 10-year journey to the Far East. She brings with her new knowledge of healing and spells unlike anything the Kingdom has seen in the past.

James is learning how to fly, which isn't easy, even with newly sprouted dragon wings. Farloft is trying his best to teach James what he needs to know to survive in his new role as a young dragon.

But everything will not be all star-fire and smooth dragon flight.

Laval, the Wizard, still has the Zonguldak Ruby, and it is out to seduce the wizard and throw the whole kingdom under its spell.

Kingdom of the Last Dragons is Book 2 of the exciting saga of Farloft the Dragon and his friends, which started with James & the Dragon (Book 1).

What listeners say about Kingdom of the Last Dragons

Note: Even though this is Book 2 in the series, it works as a stand alone. However, if you want to give Book 1 a try, the audiobook version is free on the author’s website.

The Healer Theresa has returned to the kingdom after studying for a decade in the far east. She renews her friendships with Farloft the dragon and the Wizard Laval. She also gets to know James as he continues to make strides in his learning how to be a dragon. Meanwhile, Theresa’s niece visits. She catches the eye of both the Prince and James. Laval appears distracted and secretive and Theresa tries her best to pry out of him what is the matter. Pretty soon, the Zonguldak Ruby is casting it’s evil spell upon everyone.

This was a fun installment in this jaded and interesting dragon series. On the surface, these books look like children’s books. But once you start digging in to them, you see that the characters have real, human issues. Or dragon issues. Farloft is ancient, full of wisdom, and rather arrogant with his know-it-all ways. Laval is harboring a deep hurt (from Book 1) and prone to vengeance. His pain could damage more than just his target.

Then we have Theresa and her niece who are doing their best to try to reconcile these two old friends (Farloft and Laval) while not ticking off the Prince. Plus they have their own lives – healing, house chores, the niece’s art. Snyder’s writing is so concise that she can fit a lot into a book that isn’t even 2 hours long.

So it’s obvious that the author made the decision to write herself into the book as a pretty important character. Usually, I find it kind of awkward and clunky when an author chooses to do this. However, in this book it was seamless. I really didn’t notice it at first and about 10 minutes in, it finally clicked that our Healer was a version of the author herself.

In Book 1, we learned a bit about the issue between Laval and Farloft, and also how the rift between them deepened. In this book, we get the back story. For then ending, we have a very satisfying resolution to this issue. My time listening to this book was well spent time indeed!

Narration: Mary Sibulsky was a good choice for this book as it was told from Theresa the Healer’s point of view. She also had a range of voice for both men and women and I especially liked her voice for a ticked off James and a recalcitrant Farloft.

Would you listen to Kingdom of the Last Dragons again? Why?

Because every time I find a new precious detail.

What was one of the most memorable moments of Kingdom of the Last Dragons?

I loved the dragon training part.
I cannot add any further detail, because there is a highly risk to give something away

Have you listened to any of Mary Sibulsky’s other performances? How does this one compare?

Masterfully read by a voice that enhances the adventurous features.

This second novel that was signed by Theresa Snyder is adorable.
Finally came out this audio book.
The story unfolds in a natural way and to hear him tell it is very useful for people like me who is a rookie English. Everything is easier and you can hear the correct pronunciation of each word.
Indispensable tool for every student of English, and great pleasure for all the readers of the world.
Theresa Snyder remains a master of fantasy literature.
Let yourself go and enjoy this book wherever you are.