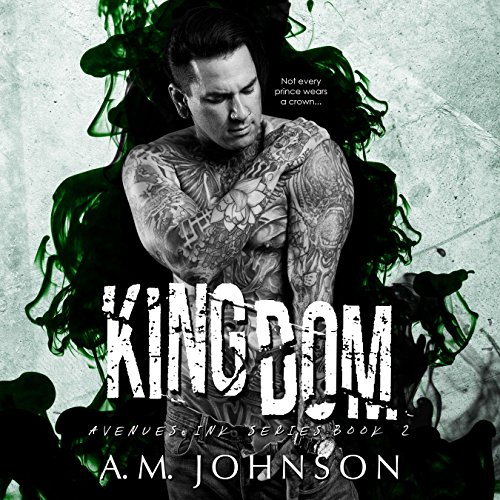 By: A.M. Johnson
Narrated by: Rock Engle,Samantha Summers
Try for $0.00

Kelly Kavanagh was Liam's happily ever after, his loyal princess. A lifeline to something better than any high school dropout could ever hope for...until the day she left to pursue a dream that didn't include him and slowly his kingdom crumbled to the ground.

Liam O'Connell was the sun to Kelly's everlasting moon, her painted prince. A strong and devoted soul to fight the war she was slowly losing against herself...until his promises had become lies and her dream was the only way she would ever survive.

They have more than just miles and time between them now. The twin fortresses they've built around their hearts are next to impossible to scale. But, when two parallel fates collide in life and in death, will the impact be powerful enough to break down their self-imposed walls?

Every love story starts with "once upon a time", but in real life there are no fairytale endings, and the prince who rescues you...will never wear a crown.

What listeners say about Kingdom

Love this author. This book 2 was just as powerful as Possession. Kelly and Liam's story also starts out heartbreaking. A.M. Johnson loves breaking your heart, but she at least puts you back together. I find myself having so much to say, and not knowing what to say when it comes to this author.
The narrators also did such a great job.

omg this was absolutely amazing!!! I was so so so happy to finally get Liam and Kelly's story! Their love was so consuming I didn't want to stop listening to it!!
the narrator's were amazing and really brought out the emotion on this book!

I loved this beautifully poetic and emotional second chance romance about 2 flawed souls who are so intrinsically connected. They are linked by their epic love and their faith in a fairy tale from their youth that promises of a happily ever after. Liam and Kelly meet when Kelly and her friend go to Avenues Ink to get a tattoo. Liam and Kelly have an instant attraction and become inseparable. But Kelly has dreams of moving away to escape her miserable home life, and Liam needs to stay to care for his family. When Kelly leaves, they are both heartbroken and pine for each other. This story picks up 3 years later when Kelly is forced to return home. They still harbor hurt feelings and misunderstandings so their first unexpected meeting is excruciating. This story is uniquely and refreshingly told in alternating flashback sequences, and fairy tale allegory, that sinuously reveal their past and present. I love Ms. Johnson's writing style, it is so poetic, multifaceted, alluring, and seductive. I became so invested in Liam and Kelly, and I cared very deeply for them. When the twists and turns happen in their story, I definitely felt every emotion. Liam and Kelly's journey is not an easy one, but is so worth the bumpy ride. Also, I loved catching up with Liam's brother, Declan and Paige and learning more about Kieran. He is so intriguing to me and I can't wait for his book.
I was totally blown away by the phenomenal narration of both Rock Engle and Samantha Summers. Their performance was so poignant and exhilarating, they really brought these characters to life. It was an intensely emotional experience that kept me totally engaged from start to finish!
I loved everything about this heartbreakingly beautiful love story and can't recommend it highly enough!

I was really looking forward to Liam’s story and it didn’t disappoint. Loving this series!!
Both narrators were great!!
Can’t wait fir Kieran’s story now :)

The time has come for the King and Queen to share their story. Liam and Kelly’s story is heart wrenching and absolutely beautiful. This is a standalone in a series and you don’t need to read them in any particular order but I am and was in love with Possession now that I’ve finished Kingdom I have to say that this is my favorited the two brothers at the moment but it’s such a close call. This story has you consumed and completely pulled in to the intensity of the story you feel as though your family living through it yourself. Incredible read and I highly recommend you grab your copy. This is my unbiased and voluntary review.

This is the second book of Avenues Ink Series. I love so much the three brothers Declan, Liam and Kieran. This time, this is the story of Liam and Kelly. The story is as captivating as the first book. The narration is also good. There are so emotions and anger, heartbreaking moments and in the opposite also so heartwarming moments. I can't wait to listen to the third book in this Series, this time about Kieran!

Yet another over 5 start rating for Ms. Johnson!

A second chance at love home wrong. Two hearts that never gave up on the missing half of their heart. Liam and Kelly met when they were both very young and fell hard and fast. He never felt good enough for her and she viewed him as her protector, but when you are do young can live last?
They go three years without talking our seeing each other, but when she had to come home for her father's funeral old scars reopen. Will they be to work past their issues and realize they were always meant to be together? Or, has too much time passed for them to move beyond the hurt they have caused one another?
Mr. Engle infused so much emotion into his voice that you felt every emotion Liam was feeling on a visceral level. Similarly, Ms. Summers had just the right amount of vulnerability and strength as she became Kelly.
Great job everyone. I can't wait for Poet to be available on audio, I am sure that will be just add great.
I received a free download in exchange for an honest, voluntary review.

I love the Avenues Ink Series and this is not a secret.

After reading all three books, and now re-reading them in audiobook format, I came to the conclusion that I can't choose a favorite O'Connell brother. And that's really rare. I ALWAYS chose a favorite but those characters are so different from each other and so appealing, that choosing one is simply impossible.

BUT I can tell you that so far, Liam's voice is the best. Liam sounds so sexy and I need to give Rock Engle the credit. Damn! I confess that I was all red and giggly when a sex scene was narrated by Liam's POV. No joke.

If you're new to audiobooks I strongly suggest that you pop that cherry with the audios of the Avenues Ink Series. They are honestly the best audiobooks I've ever heard.

A second chance romance written by AM Johnson, has to be good right? Well, it is more than good, it's incredibly amazing. This book, like the first in the series(Possession) will grab you at the first chapter and keep you listening until the last word. Liam and Kelly met when Kelly was 17 and decided to get a tattoo at Avenues Ink. A childhood fairy tale gives them and instant, strong connection. But life for them was going in different directions, Liam having a strong connection to his family and not being able to follow Kelly in her dreams to go to California, leaving her horrible childhood behind. AM Johnson has a way with this book that many authors cannot pull off. The flashbacks to their first chance at a life together then back to the present is woven together with such perfection and with such elegance that it's easy to follow and flows naturally. Declan, Paige and Kiernan's appearances go to solidify the family bond that Liam feels and the responsibility he still is carrying for them and gives you that coming home feeling of knowing your characters. This series is definitely in my top 10 of 2017, and I am so glad to have found AM Johnson!

The choice of Rock Engle and Samantha Summers for narrating this story is excellent. I enjoyed both, but found Rock Engle to be Liam exactly as pictured him. Summers did a great job as well, but I found her voice to be a little too young for my liking.

Having read Kingdom I couldn't wait to listen to the Audiobook!! It was so much fun going back into this series and listening to these characters come to life. I really enjoyed Rock and Samantha as Liam and Kelly. If possible my heart broke even more this time around because their voices hit me straight in the chest.

This is a second chance story like no other!! AM Johnson is truly an amazing storyteller- she hooked me in with this incredibly heartbreaking and tragic story of second chances, family obligations and true love! I spent the entire book with my heart in my throat! Liam was always the responsible brother/caregiver of the O’Connell family and you really get to see how much he sacrifices for his family. I loved that Declan and Kiernan also make appearances in this story! I loved Kelly and her circumstances are also so tragic! I couldn’t wait for these two characters to get their much deserved HEA!

Rock Engle and Samantha Summers were perfect for these characters as they brought so much emotions to the forefront of this amazing story!