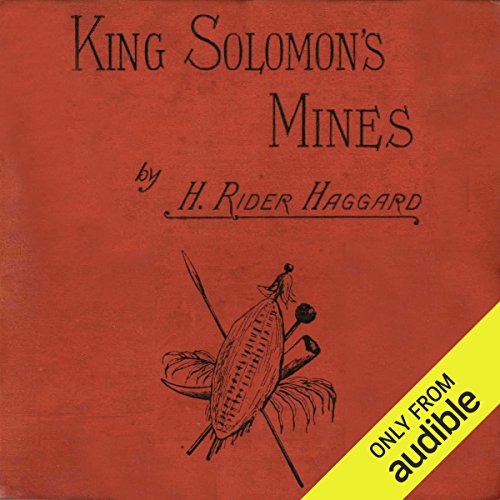 By: Henry Rider Haggard
Narrated by: Alan Munro
Try for $0.00

First published in 1885, with billboards and posters around London announcing "The Most Amazing Book Ever Written". It became an immediate best seller. The genesis of the Lost World literary genre!

The search of an unexplored region of Africa by a group of adventurers, led by Allan Quatermain, for a missing brother, lost while searching for the mythical mines of King Solomon. It is the first English adventure novel set in Africa. The novel has been adapted to film at least six times. The first version premiered in 1937.

I usually seek out Mr. Munro when there is a classic to be read. He usually does not disappoint. His voice seems suited for 18th century literature. I know that classic adventure stories can pale in comparison with plot lines and ease of today’s authors. But taking the book as it is for it’s time I enjoyed it very much.

This narrator is the absolute worst

Great story but the dude that reads it is painful. I couldn't do it! I had to actually buy another version to listen to!

Narrator put me to sleep. Whilst driving.

I listen to a lot of audiobooks and podcasts and I really wanted to enjoy this book. I mean, an adventure in colonial Africa with original tough guy Alan Quartermaine—what’s not to like? I’ll tell you what’s not to like. This narrator. Not only was he speaking in what felt like slow motion, not only did he never seem to vary his inflection or accent on different characters’ voices, not only did he seem to sound indifferent to the forward momentum of the story, he actually managed to make a running elephant hunt come across as boring. As in: zero tension or intensity. I honestly couldn’t finish this book. Sorry to Mr. Munro, but i wish I could give him “zero” stars.

Great classic book, and clear reading, just a little bit droning which let my mind wander on occasion, had to play many sections back to keep up with the story.

Old fashioned in so many ways, including language, but of course that is the charm. The locutions hearken to a day when language was happily taken much more seriously. The story is of course fanciful also in an old fashioned way, but slips the reader away into a fantasy land like few others. While dated by language and racist pronouncements, it remains a classic, not disconnected from other classics such as Heart of Darkness, and King Leopold's Ghost. I recommend it, even for young boys learning to stretch their imagination.

Short Version: Enjoyed this story (despite some faithfully presented artifacts of the time in which it was written), recommend listening at 1.10x speed.

Pros:
This presents the first-written of the stories of Allan Quartermain, and perhaps the one best-known to the average person in the modern age. A classic adventure tale set in 1800's Africa, it provides a faithful presentation of the Euro-centric view of life, culture, race, etc in Africa at the time it was written. This is not to say that those views are or were good, just that this story provides a good straightforward example of the views as presented through the life, thoughts, and actions of Mr. Quartermain. Taken for what it is, the story is engaging and keeps the listener wanting to know what happens next, even when we know the final outcome for the main character is going to be good (since it is presented as his rendition of the experiences presented to be published as a book). A must read/listen for fans of the genre or those wanting an insight into the cultural viewpoint of 1800s European males on topics of the day and life in Africa.

Cons:
Mr. Munro is a good narrator but goes just slow enough that, for me at least, it can make the book lag at times, even in combat scenes. Advancing the playback speed just slightly (I found 1.10x speed worked for me) keeps it flowing smoothly while not losing anything in the tone of voice.

An action-packed entertaining classic work of literary fiction. You won’t be disappointed or bored with Allan Quatermain’s adventurous treasure hunt for diamonds in Africa.

The most stilted, unnatural narration I've ever endured. Almost like a machine. Utterly distracting and horrible. I will avoid anything narrated by this chap.

The bass on the narrator almost makes the speakers blow... Very dull and slow, returned after 1st chapter...

Loved this story when I was at school, over 50 years ago. I have never reread it and it was wonderful to come back to it and find it has lost none of its magic.

I've read the book before, it's a great story. But I gave up about 8 minutes in, second chapter I think.
The narration
is uttterly staccato
he seems to
want to
take a pause
between every few words.
you could die of
boredom waiting for
him to finish a
sente

Oh and the reviews that mention the ridiculous production are dead right. The bass is so overdone that on different players [car and a usb speaker] the voice was virtually inaudible anyway, just a low rumble, I could only hear it when using earphones.

I've read this book many times but this is the first time I have listened to it and I will listen again and again.

Would you try another book written by Henry Rider Haggard or narrated by Alan Munro?

I have only recently tried audible books. The first two were Harry Potter 1&2. Both easy to hear. This one is too faint to be of any use

If you could play editor, what scene or scenes would you have cut from King Solomon's Mines?

Extremely well read and written, although it shows how social norms have changed. I cringed at the hunting of animals. in this original edition. Luckily it does not go on about hunting and soon leads into the classic that is King Solomon's Mines.
Well worth listening to....

struggled to finish this book.not happy with reader.the story was alright not the best version