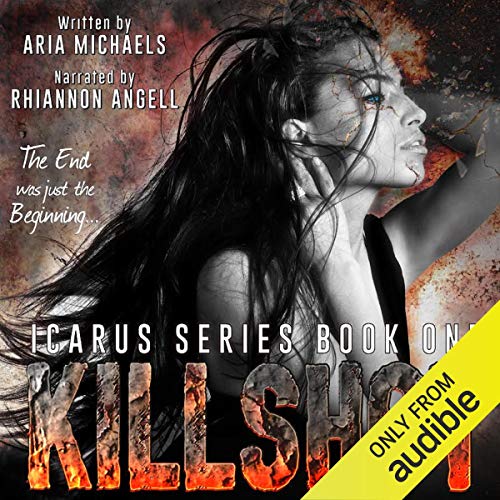 When 17 year old Liv Larson and her brother are sent to separate foster homes, she becomes content with her isolation and dedicates her every breath to getting him back. After months of solitude and anti-social behavior, Liv's best friend Riley drags her to a Rooftop Party to view Icarus (the once in a lifetime solar flare) where Liv finds herself inexplicably drawn to Zander James, the mysterious boy with the crooked smile.

For a few hours, Liv's troubles finally feel a bit less overwhelming-that is until what should have been a small flare erupts into a massive solar storm forcing them all to seek shelter in the school's basement. Cut off from the rest of the world and with no signs of rescue, fear and paranoia set in and battle lines are drawn, dividing their ranks. What is left the group must embark on a perilous journey to save one of their own and find their families... but, something sinister awaits them in the shadows and it's undeniably connected to Liv.

Can Liv keep her promise to reunite with her brother? What are she and her friends willing to do to survive? Will their bravery and determination be enough to save them all from a rogue government, a terrifying virus, and the things that go bump in the night…Or was Icarus, indeed, The Killshot?

So much occurred over the course of this book, it made it such an amazing read. It wasn't overwhelming though, which can make it hard to keep up with. But by the time you get to the end, and think back to where it started and the full course of events, it was an amazing journey. It isn't even an easily classifiable story. YA, elements of straight sci fi, apocalypse, horror, action, meta-humans, but it never seemed like a jumble.

Rhiannon Angell did a great job narrating. I always got a smile when she'd have Liv mimic some other character in her thoughts - very well done.

I look forward to more novels in this world, and definitely will listen to and recommend the narrator.

Would you listen to Killshot again? Why?

I will listen to it many times. It is a wonderful story, and Rhiannon Angell does an amazing job reading it.

I love the twists and turns. I also love the new and older friendships formed between the characters. It's different than other books of its kind.

Which character – as performed by Rhiannon Angell – was your favorite?

Liv is my favorite. Amazing job bringing her character to life. My second favorite is Riley. I love them all.

I got it last night and stayed up til 3am listening to it. I couldn't get enough. It kept my attention.

I would recommend this to everyone. It is amazing. You will love it and want to keep listening.

What did you love best about Killshot?

The storyline is amazing, the writing excellent! The characters are to die for and the pace was perfect!

What other book might you compare Killshot to and why?

Which character – as performed by Rhiannon Angell – was your favorite?

Liv and Zander, are personal Favs but overall she did an amazing job capturing the characters and their voices.

Definitely! Once you start this plan to spend your time glued to it from start to finish!

I think this will be the next big blockbuster movie series. You really feel like you are a part of the story from reading the book or listening to it, you simply can't miss this one!

I loved Aria Michaels' take on a end of the world apocalypse. I was sucked in from page one and instantly fell in love with thw characters. Riley, Liv's best friend is so much fun and is exactly what Liv needs. After the last page I was ledt wanting the next book to see what heppens next. Highly recommend!

You will love this novel or hate it!

The concept behind Killshot is highly unlikely if not impossible. But there is almost constant action. Note that this book does not stand alone; the novel ends with lots and lots of uncertainty. The second book in the series has not yet been announced. Although the novel is not one of my favorite genres and although the concept is less than credible, I did enjoy it and do recommend it.

This is the first story that I've listened to by this author , Aria Michaels. I thought Aria did an exceptional job with detail and the world she created is filled with detail and a vivid imagination. The story at first, I was having problems connecting myself to it but as I listened on, I finally was able to connect to this story and I enjoyed it immensely. The characters help bring the story to life. I went through the story wondering exactly what would happen and the author did an amazing job at keeping you surprised on what would happen in this apocalyptic adventure. The author did a great job with maintaining the POV from characters.

Narrator, Rhiannon Angell brought this story to life and made it a great story to listen to. All the accents from each character was identifiable so I knew who was speaking throughout the story. I did have problems with the voice of the gay boy Jake. Okay, just throwing it out there, but just because you're gay that doesn't mean you talk like a female. Jake's voice sounded more female than Liz so that was a big problem for me. Other than the one problem Rhiannon did a great job with her performance of Killshot. I give it a 5 star rating and those who love stories like Hunger Games and Divergent then you'll love this story so get it today, you won't regret it. I received this audio in exchange for an honest review.

What was one of the most memorable moments of Killshot?


This audiobook is the action-packed, post-apocalyptic thrill ride. It’s gritty, violent, and full of enough gore and suspense to keep your interest. A heart-stopping journey into a dangerous new world that takes on dystopian without going zombie,

The audible book was gifted to me in exchange for a review.

This book really starts off grabbing the reader. I found the storyteller's voice, Liv, to be compelling. She has a way of dropping in parts of her story without inundating the readers. The set up is great and then when you think everything is going to be honky-dory, it all takes off.

A+ for a unique storyline, set apart from the typical. And also, I loved the pacing of this book. It kept me busy while I worked out, which a huge thank you to the reader. I would recommend this book to anyone who loves a great dystopian/fantasy novel. Although keep in mind that it is really dark at times.
Really looking forward to second installment.

This series has potential....

Would you listen to Killshot again? Why?

What was one of the most memorable moments of Killshot?

When Liv and Zander find out they have special powers now!

There are many heart wrenching scenes in this book...its kind of like all hell breaks loose at once and leaves these young people in dire straights....how could you not feel and worry for them?

Ok first off, you CAN NOT compare this story to Hunger Games or Divergent...you just cant...maybe as the series progresses but not this first one....Its definitely YA and for a younger crowd....I am impressed with the story line, it is a remarkable idea and one that is well worth being told. I like Liv as a main character she is strong and a good heroine and I think going forward this story will just get more interesting...Killshot is a great title, because basically that's what happened...a Solar flare storm basically hits the earth and destroys the atmosphere to unlivable conditions, but no one expects a virus to erupt and mutate people into zombie like animals....OR DO THEY? The government definitely knew something was coming and as always does not alert the public....all in all I liked this story and the narration was good...I just wish it would have been edited better...there are many pauses...and some repetitive verbiage..that could have been toned down and made this book a solid 5 star listen...sometimes the sound quality is tinny...and it bothered me....I listen to soooooooo many books I notice the little things.... Overall this is a great idea...and I know its going to be a memorable series....I will continue it!!

I was given a free copy of this book by the narrator for an honest review...and it was worth a listen and even a credit!