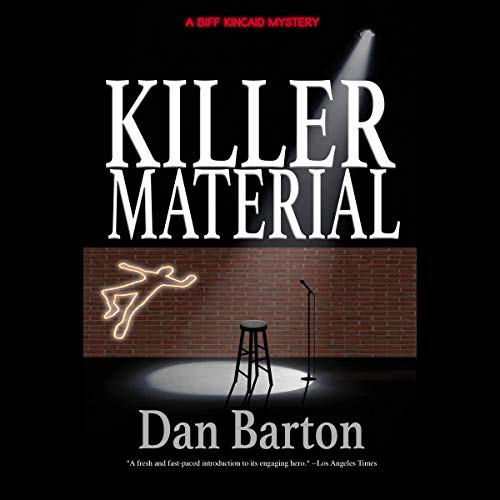 When Hollywood stand-up comedian Biff Kincaid learns the comedian he’s filled in for at the last minute at a comedy club was murdered, he uses his skills as an amateur detective to find out who the killer is. He uncovers a joke thief who recorded Biff’s act and sold it to wealthy wannabe who plans to use Biff’s material for his Hollywood debut. Another comedian would let it slide, but Biff has never backed away from a fight in all his years in the funny business - and he’s not going to start now. With a pair of fists as fast as his mouth, Biff sets out to uncover the murderer - before he’s the next victim.

Killer Material is the first in the Biff Kincaid mystery series which includes three more titles: Heckler, Dead Crowd, and Headshot - with more on the way.

"Ladies and gentlemen, introducing for your reading pleasure, L.A.- based stand-up comic Biff Kincaid. Having accepted a last-minute request to fill in for friend Art Westcott at Chortles Comedy Club, Biff realizes that the first performer, Ned Lando, has stolen all his material from other comics. After the show, Biff learns that Lando paid the sound technician $100 to tape the routines of the gig's two other acts: Biff himself and female club-manager Kelly Malone. Biff confronts Lando outside the club and discovers, just before he's knocked out, that the thief has sold the tape for $1,000. Biff wakes up in Kelly's apartment, and by morning romance is afoot. When Biff goes to see Art, he finds his friend shot through the head. As the last person to speak to him, Biff becomes the prime suspect in his murder. Suddenly things aren't so funny, and Biff begins to put a lot of miles on his Mazda RX-7 in pursuit of Lando and the real killer. Barton, himself a former comic, writes from the heart. He knows L.A. and the comedy scene, the clubs and the unglamorous day world of the rank-and-file entertainer always looking for the next job. Barton and Kincaid certainly rate a return engagement." (Publishers Weekly)

"Successful standup comedian Biff Kincaid substitutes for a friend at a comedy club only to find his material recorded and sold without his permission. As he tracks the thief, Biff discovers a pattern of larceny and deception by a wealthy wannabe who will stop at nothing - perhaps even murder - to achieve fame as a comic. Biff does his best to sabotage the guy's efforts, including reporting him to police as a suspect in the murder of Biff's friend. Kincaid seems to love a ruckus as well as a joke, so there's never a dull moment. Recommended." (Library Journal)

"Brace yourself for a tough, hard-edged look at the cutthroat world of...stand-up comedy. Just kidding. Barton's first novel is a genuine delight: Funny in all the right places, suspenseful where it needs to be, with a likable protagonist (Biff Kincaid, stand-up comic) and a plot twist that will take readers by surprise. Barton, a professional stand-up comedian, has constructed a plot that allows him to show off his knowledge of the business - Biff has to figure out who killed a fellow comedian while simultaneously foiling a wanna-be comic's plot to steal his material - and, unlike many writers who try to turn their professional expertise into a novel, Barton has plenty of talent. Although the novel doesn't explicitly promise a sequel, it's a safe bet that Barton has more Biff Kincaid stories up his sleeve. That's great news because this is one of the most promising crime-fiction debuts of the year. Expect to be hearing lots more about Biff Kincaid." (Booklist)

What listeners say about Killer Material: A Biff Kincaid Mystery

attention span of a squirrel

when is this going to be a movie?

I'm not much for reading and got an attention span of a squirrel. I multi-task & figure I'll give something a listen... well... if it weren't for outside distraction I would have listened to the entire book in one sitting. I was ready to hit the road so I could listen without distractions. I dunno what it is but I love everything. There are some authors whom are not much for performing but this author absolutely did this justice. I've become a fan and want to know when the next one comes out?

The extremely talented and witty Dan Barton narrates his own book about a professional stand up comic who is investigating the murder of another comedian. The book is fast paced and narrated that way by Mr. Barton. It grabs your interest right away and keeps you interested in Kincaid and his world of professional stand up comedy in Los Angeles. I would have picked up the other books in the series right away, but I may have to wait for another narration by Mr. Barton, who is a highly skilled humorist as well as a writer.