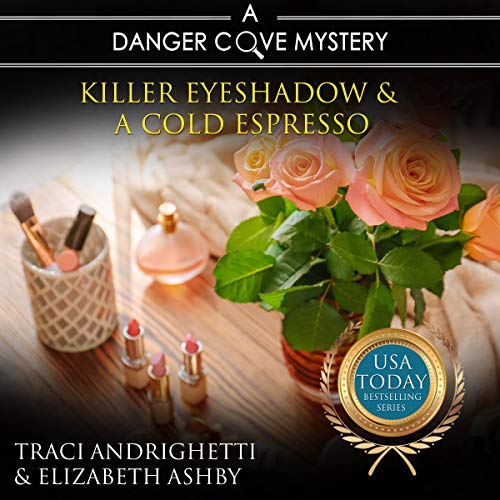 Killer Eyeshadow and a Cold Espresso

By: Traci Andrighetti,Elizabeth Ashby
Narrated by: Kayla Perillo
Try for $0.00

From USA Today best-selling authors Traci Andrighetti and Elizabeth Ashby comes a book to die for....

Salon owner Cassidi Conti thought The Clip and Sip’s struggles were behind her. That is, until a local sightseeing company gets wind of her building’s brothel past, and busloads of tourists run her clients off. Hoping to save her business, Cassidi contracts Finials and Facades Renovation and Restoration Services to remove some racy relics from the premises. To help cover the costs, her step-cousin Gia commits the duo to doing hair and makeup for the vow renewal ceremony of a wealthy socialite and her gangster husband. But when the soon-to-be-renewed groom drinks an espresso during an eye makeup session and keels over dead, Cassidi fears a mob retaliation. Now she has to figure out what an exotic flower arrangement, an antique cameo, and an Agatha Christie book have to do with the murder, or it’s RIP for The Clip and Sip -and for Cassidi!

Danger Cove is a sleepy little town in the Pacific Northwest and home to renowned mystery novelist, Elizabeth Ashby. While Elizabeth swears the stories she writes are fiction, you can find the inspiration for her murderous tales all over Danger Cove...from the intriguing cast of local characters to the places to eat, play, and explore in Danger Cove. Don't let our name fool you - we're the friendliest (even if deadliest) town in the Pacific Northwest!

What listeners say about Killer Eyeshadow and a Cold Espresso

This was the first Danger Cover Mystery book that I read and boy did it get me hooked on the series, so much so that as soon as the book came out on audible I just had to add it to my collection. The characters are so much fun and with so much going on in the story from unwanted tours to missing gold to dead bodies it is a book you can enjoy again and again. Definitely worth at least one listen if not more.

Working and owning a hairdressing salon should be easy in a small town, where everybody knows everybody but that doesn't prove to be the case for Cassidi and her step cousin, especially when the shop used to be the local brothel, which has just been added to the local tour. That would be bad enough but the previous owner (her uncle Vinny) was into some shady deals and was murdered there too. When his ex partner is released from prison and dies at a party Cassi is attending things get really funny,um I mean serious. The police have plenty of suspects and clues but it is not long before they focus in on the two people who keep finding dead bodies, Cassidi and her cousin.
Love the characters and the plot made for a great story that kept you guessing what was going to happen next.
The narrator was very good and I found her easy to listen to.

Cassidy and Gia are struggling to stay open as the tours of their salon drive their customers away. Desperate for money they take a gig at the vowel renewal ceremony of a local mobster. Murder strikes again and the game is afoot. Great performance and series. Recommend.

This is a fun cozy mystery series and this one did not disappoint. Finally uncle Vinny's killer is revealed. The missing money was also finally found. I was given this free review copy audiobook at my request and have voluntarily left this review.

Another great Danger Cove Mystery. Danger Cove salon owners, Cassidi and Gia end up being suspects in a murder. The victim was just released from jail. The ladies must fight to prove their innocence, save their salon and find out who killed their Uncle Vinny. In the meantime, they cross paths with criminals of all kinds. There were many laugh out loud moments. I loved how factual people, including the authors, were brought into the story as well. The characters were well developed as was the story. The narrator needs some work. There were some voices I thought were spot on, but a lot of times I couldn’t tell who she was trying to be. At the beginning of the story, there was little differentiation between characters. It got better as the book went on but was still at times confusing.