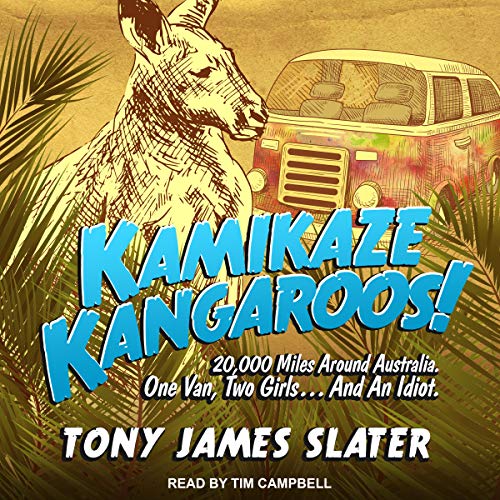 By: Tony James Slater
Narrated by: Tim Campbell
Try for $0.00

Tony James Slater knew nothing about Australia. Except for the fact that he'd just arrived there. The stage is set for an outrageous adventure: three people, one van, on an epic, 20,000-mile road trip around Australia. What could possibly go wrong?

Of course, the van - nicknamed "Rusty" - is a crumbling wreck, held together by the world's most garish paint job. They're crisscrossing the continent through some of the most inhospitable land on the planet - the infamous Aussie Outback. And isn't there something about Australian animals being...well, you know, kind of dangerous?

Unprepared, underqualified, and hopelessly inept, Tony battles gigantic pumpkins, mechanical mishaps, and suicidal kangaroos, armed only with a thong and a sense of humor. His companions struggle to keep him safe while climbing in drag, snowboarding off cliffs, and hiking hundreds of miles through the bush. One thing's for sure; this "adventure of a lifetime" - if they survive it - is something they're never going to forget.

So, scull those stubbies! Grab your galahs! And put down that platypus. Look out, Australiat! There's an idiot coming....

What listeners say about Kamikaze Kangaroos!