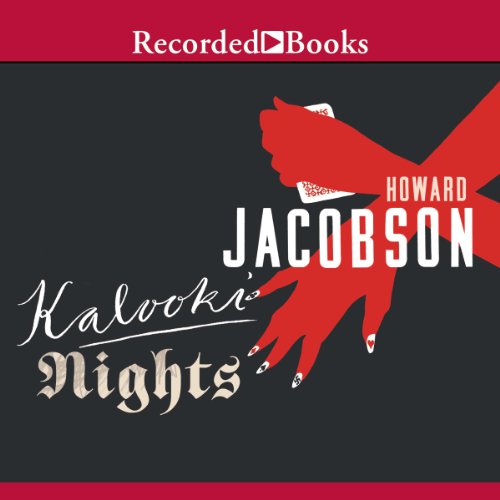 By: Howard Jacobson
Narrated by: Tom Stechschulte
Try for $0.00

Two young friend, Max Glickman and Manny Washinski, get together in an abandoned air-raid shelter and create a comic-book history of Jewish suffering. Years later, Manny is in jail for a horrible crime and Max is a comic book artist. After Manny's release from prison decades later, the two meet again when Max is hired by a production company to write a film treatment based on Manny's life.
©2007 Howard Jacobson (P)2007 Recorded Books

What listeners say about Kalooki Nights

In a Guardian interview, Howard Jacobson said this was his favorite of his novels. Its depth of character and ideas make his choice understandable. Jacobson's topic is serious and some of the details are horrifying, BUT much of this books is extremely funny, particularly in Tom Stechschulte's excellent reading of the author's witty way with words, ironic situations and ideas. As a British Jew, the author and his narrator "sound" a little different than the stereotypical American Yiddish humorist.

His narrator, a Jewish cartoonist, remembers several time periods, his childhood with friends and family, his marriages, his adult life with friends and his memory of reading about the holocaust. Although the time periods are jumbled, they are easy to follow because of the literary devices of repetition of words and themes.

For example, "Kalooki" is one of those repetitions; it is a card game similar to gin. The narrator at one point says that "not playing Kalooki is how I learned to understand I wasn't my mother." Other repetitions include his childhood "jew-jew-jew-jew" which his relatives thought was his attempt to imitate a train (choo-choo), which of course ties well to the story of Nazi transport of European Jews and the angst of his struggle with group identity.

Early, Jacobson's narrator explains that his parents are in the "in-between" generation, between those who want to forget (those who experienced the holocaust) and those who know they must not forget (the narrator). He explores the ramifications of group identity brought by being a Jew whether religious or not. At one point he says that "To a Jew there is no acceptable way of being a Jew. Every other Jew has got it wrong." So he struggles to understand his own identification, his judgment of Jews and non-Jews, as well as their judgments of him.

This book offers the opportunity to better understand individuals who struggle with being part of a group by birth.

Full of hilarious contradictions, this book is also erudite about jewish culture providing quite scholarly details.

Membership in the tribe is necessary to absorbthis

What would have made Kalooki Nights better?

Has Kalooki Nights turned you off from other books in this genre?

I suppose. My sympathies to the narrator.

You didn???t love this book... but did it have any redeeming qualities?

None that I could discern

As an amazon reviewer said,

I’ve never read or listened to any novel simultaneously quite so horrifying and quite so hilarious. Even halfway through I couldn’t have anticipated how moving the conclusion would be. I would make myself sound silly if I tried to say how much I admire the novel’s structure, which is extraordinarily intricate but never confusing. I can't vouch for the accuracy of Tom Stechschulte's accents (Manchester, London, Home Counties, Manchester-inflected Yiddish), but his voice sounded to my ears just right for every character. A very funny, very disturbing, very affecting and very well-written and -read novel, unlike anything you've encountered before.