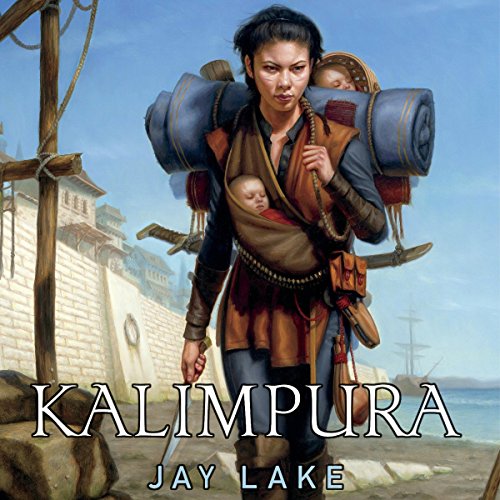 By: Jay Lake
Narrated by: Katherine Kellgren
Try for $0.00

This sequel to Green and Endurance takes Green back to the city of Kalimpura and the service of the Lily Goddess.

Green is hounded by the gods of Copper Downs and the gods of Kalimpura, who have laid claim to her and her children. She never wanted to be a conduit for the supernatural, but when she killed the Immortal Duke and created the Ox god with the power she released, she came to their notice.

Now she has sworn to retrieve the two girls taken hostage by the Bittern Court, one of Kalimpura’s rival guilds. But the Temple of the Lily Goddess is playing politics with her life.

What listeners say about Kalimpura

Please let there be a fourth book!

I just finished listening to Kalimpura, and all I want to do is listen to it again. It's the kind of fantasy book that demonstrates through its own excellence all the things that are sometimes missing from other books in the genre. The characters are multi-faceted—flawed, believable, and sympathetic. The settings are likewise layered, with vivid descriptions. The plot offers surprising turns, but still feels solidly grounded in the Green universe. This is a great series for readers who like strong female characters.

The narrator is very animated—so animated, in fact, that I feel like she must have been acting out the various battles during the recording. She definitely has an uncanny ability to conjure Green's fury.

I don't know if there is a fourth book planned for the Green series, but I hope so. I'm not done with these characters!

The trilogy is well written. All three have good story lines with good passing. Each has a very strong and satisfying ending which is rear. Well done Jay Lake!

What did you love best about Kalimpura?

How she grows internally through out the chapters. Her sexuality also grows but she doesn't notice.

Her character changes whiles telling the story was great. the influx and voice changes were well told.

YES!! but it is killing me that she hasn't written or presented another story on the series.

NEED MORE OF GREEN and the short stories only teases.