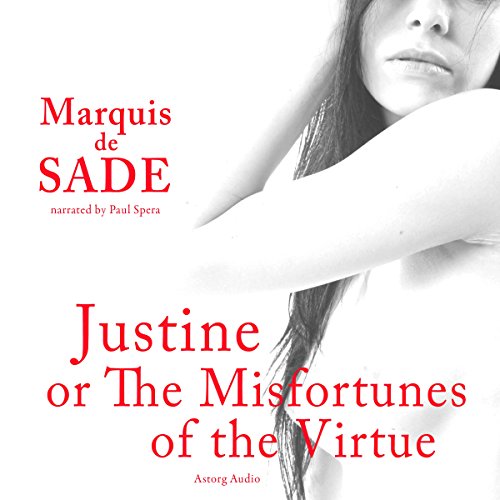 Justine, or The Misfortunes of the Virtue

Justine, or The Misfortunes of the Virtue

"Justine, or The Misfortunes of Virtue", is an early work by the Marquis de Sade. It is a novella, written in two weeks while he was imprisoned in the famous Bastille. Unlike some of his other works, it is not just a catalogue of sadism. It is meant to bring new life to an old genre, which had the reader accustomed to see virtue eventually triumph after trials only meant to bring out its value.

Sade would have none of that in Justine: in her quest for virtue, the main character keeps falling into terrible situations, which humiliate her and present her with sexual lessons hidden under the mask of virtue. She seeks refuge and confession in a monastery, only to discover the monks are perverts and to be forced to become their sex-slave; she tries to help a gentleman getting robbed in a field, but he eventually imprisons her in his dungeon, subjugating her to various sexual punishments...

Not the whole book--not even an "abridged" version

What does Paul Spera bring to the story that you wouldn’t experience if you just read the book?

His voice and reading were nice, but there were several points at which he would reread a sentence, obviously with the intention of editing the reading later and deleting the sentences that he felt he had messed up on. The editing process was clearly not carried out or simply not thorough.

This reading only includes the first part of the book (I'd say less than half), and stops abruptly in the middle of an episode. There is no semblance of a conclusion, no attempt to pick and choose portions of the book to narrate so as to leave the whole storyline intact while effectively "abridging" the work. It is as if they ripped the book into three pieces and read the first one, concluding the reading practically mid-sentence.

I’ll admit I ignored the book after awhile due to
The narrator repeating the same lines over again, I would not recommend this version