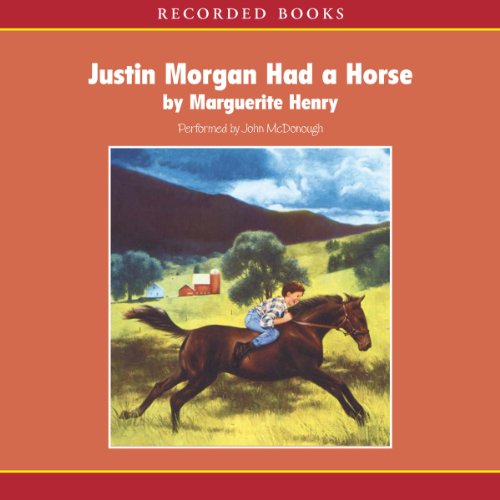 Justin Morgan Had a Horse

By: Marguerite Henry
Narrated by: John McDonough
Try for $0.00

In the early years of our country, a poor school teacher, Justin Morgan, receives a horse and her tiny colt in payment for some work. He wishes he had been given money instead. Hoping that he might sell both horses for a fair price, he asks his student, Joel, to break in the colt. To his surprise, young Joel soon discovers that this small, brown creature has special abilities: "Bub" can pull more than a team of oxen, and he can run faster than a racehorse. But while the sturdy little runt wins contest after contest, all Joel wants is to save enough money to buy the beloved "Bub."

Justin Morgan Had a Horse is the story of the love between a young boy and a very special horse. A classic of children's literature, it also traces the history of one of the most famous breeds of American horses - the Morgan. Marguerite Henry has earned enduring popularity for her children's books, which include Misty of Chincoteague, also a Newbery Honor book.

What listeners say about Justin Morgan Had a Horse

Our family has loved Justin Morgan for years. Horse lover and friend alike will laugh and feel their hearts throb with the gritty pluck of the first of the prized Morgan Horses in this well spun tale. A great reader brings the Early American characters to life with picturesque inflections.

We downloaded this and listened to it for school. The narrator does a wonderful job with the different characters voices, and my son would have listened to the whole 4 hours at one sitting if allowed. I believe this audio version really brought the story to life, and my son still recall alot of details about the story,and it has been several months and many books ago. Highly reccommend.

I have 3 boys ages 7-13. Whole family loves this book and wish it were even longer! Wholesome and interesting.

Good story for all ages

This was a great little story and brought to life by a great narrator. I love listening to John McDonough. I could imagine each of the characters and exactly what they looked like. I felt like I wanted to hold and hug the young boy so many times throughout the book. And I wanted so much for him to have that little horse! I am not really a horse lover - but I loved this horse story.

The story of a boy and his horse

Where does Justin Morgan Had a Horse rank among all the audiobooks you’ve listened to so far?

Little Bub, the horse. He is as game as they come!

The little horse that built a nation.