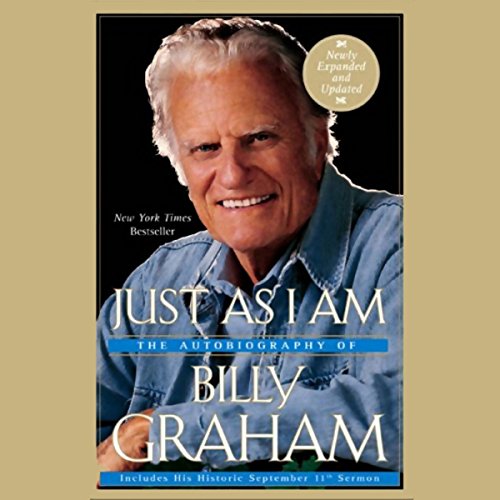 Just as I Am

Billy Graham has touched millions with his message of faith, and now, for the first time, he tells his life story in a momentous work of insight. Hailed as the world's preacher, Dr. Graham has been taken by his calling as an evangelist to every nation, from major capitals to the most remote outposts. His crusades have spanned more than 50 years, and he has been part of history in the making, from his famed antisegregation stance to his friendship with every president since Eisenhower. Through his many years of public ministry, Dr. Graham has led by his extraordinary example of integrity. In this unforgettable memoir, he looks back at it all with down-to-earth warmth and candor, from his upbringing and early preaching to his internationally influential public ministry.
(P) and ©1997 HarperCollins Publishers, Inc., All Rights Reserved, Harper Audio/Zondervan, A Division of HarperCollins Publishers
Biographies Spiritual Growth
Show more Show less

What listeners say about Just as I Am

I thoroughly enjoyed reading this book. I always have respected Billy Graham and admired his work, but now I have been provided insight into his heart and soul. Beginning with his childhood, Graham describes how God worked in his life to take him to international prominence as an evangelist. He is undoubtedly the greatest evangelist of the 20th century, and the events described in this book are nothing short of miraculous. Many of us grew up with Billy Graham, and may have simply taken his ministry for granted. Here in this volume however, we see how God was moving powerfully through a humble, single-minded Baptist preacher to shake the world for Christ. If you have a heart for evangelism, you won't want to miss this book. If you don't have a heart for evangelism, then reading this book may very well change your priorities. This title already is quickly becoming a classic.

Just As I Am - Billy Graham - A Role Model

Yes, I would recommend this book because in it Billy Graham models a life of singular focus on what God called him to do, and because regardless of how many powerful figures he befriended or interacted with or the massive size of the crowds which attended his crusades, he maintained an attitude of utmost humility, giving all glory to God. I would love to be half the man Billy Graham was.

Of course the central figure, Billy Graham, but what I also found interesting were his portraits of the people he befriended or interacted with, like his wife, or the numerous presidents which counted him as friend. Richard Nixon stands out as one character who I had always had a negative opinion of because of Watergate, but through Billys' portrail discovered him to be a man of integrity and conviction and deeply honored the Office of the President, who was loved by many based on the 40,000 people who attended his funeral, including Bill Clinton.

I felt as if it put into perspective how I want to serve God with my life, with simplicity and humility. It also taught me that even devoutly Christian men love to think for themselves and not blindly follow their faith.

Having already listened to the biographies of Albert Einstein and Benjamin Franklin by Walter Isaacson, I was expecting more detail about Bill Grahams' life than he offered, so this Autobiography seemed a bit short considering that at the time of its' publication he was 74. Other than that, I really appreciated how he included the pinnacle moments and tipping points of his life and ministry which helped to shape his life, and the window he provided into the life of a minister, pastor, and evangelist. I hope that someday, someone like Isaacson will write an exhaustive biography of Graham, but regardless, this book is a worthy investment providing insight into the life of a man who God used to introduce Jesus Christ to many generations and people, rich and poor, young and old, who stood up for the civil rights of blacks when it wasn't popular, and who gives us a powerful example of how it behooves one to live, in the service of humanity.

I don't want to sound critical of anything Dr. Graham has done. God has used him in a mighty way to preach the gospel all around the world and countless lives have undoubtedly been changed because of his faithfulness.

The book, however seemed to be more about the crusades and the inner workings, behind the scenes stories of how they came about.

I expected more personal stories and experiences of Dr. Graham and the people he encountered than what I heard from the book.

A little less than I expected but worth the listen

Although, he says over and over that his ministry was not about the 'big names' and 'big venues' there is much mention of both. I am sure that with his ministry and his history with the millions of lives that he touched it would difficult to remember, let alone list the countless unfamiliar names and lives that he interacted with.
I would have liked to hear more about the personal Billy Graham as opposed to the professional Billy Graham.
Still; it was not time wasted.

Couldn't stop listening. Such an amazing life he lived and we are able to relive it through his words.

an amazing book about a very special man.

Billy Graham is a blessing and I'm so thankful for his service to the Lord. This book really allowed me to hear the amazing behind the scenes accounts of his life.

Billy Graham, like David,was truly a man after God’s own heart. He preached and taught all over the world about God’s son Jesus Christ being our savior and redeemer. Praise be the name of God.

the audio skips two key chapters from the book at the 1 hour and 48 min mark. chapter seven and 8 of the hard cover book.

A clear message through a public life...

If you appreciate the work of Billy Graham, you will enjoy this biography.

The only disappointment is that the audio is abridged. I feel as though there were chapters cut short and many stories were left out.

what an amazing life this man lived. truly inspiring story. good read for anyone.