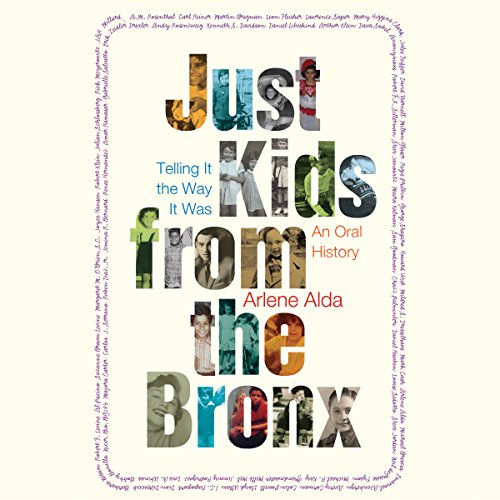 Just Kids From the Bronx

The vivid oral histories in Arlene Alda's Just Kids From the Bronx reveal what it was like to grow up in the place that bred the influencers in just about every field of endeavor today. The Bronx is where Michael Kay, the New York Yankees' play-by-play broadcaster, first experienced baseball, where J. Crew's Millard (Mickey) Drexler got his street smarts and his first jobs, where Neil deGrasse Tyson and Dava Sobel were urged to pursue science and where music-making inspired hip hop's Grandmaster Melle Mel to change the world of music forever. The parks, the pick-up games, the tough and tender mothers, the politics, the gangs, the food - for people who grew up in the Bronx, childhood recollections are fresh.

Arlene Alda's own Bronx memories were a jumping-off point from which to reminisce with a nun, a police officer, an urban planner, and with Carl Reiner, Colin Powell, Maira Kalman, and many other leading artists, athletes, scientists and entrepreneurs - experiences spanning six decades. Alda then arranged these pieces of the past, the mornings on the Grand Concourse and afternoons in the halls of Bronx Science, into one great collective story, a film-like portrait of the Bronx - and of America - from the early 20th century until today.

"The numerous voices presenting these oral histories are flowing, velvety, glib, humorous, and always passionate...This is an informative and heartwarming retrospective of life in the Bronx, in addition to an enlightening look at the changes in our society and culture." (Publishers Weekly, starred review)

What listeners say about Just Kids From the Bronx

I also appreciated the variety of career paths that Bronx kids followed... From astronomers and doctors to teachers, business people and celebrities, Bronx kids were everywhere...

That being I heard a lot of similar age/area/educational level stories.. There were some outliers, but the book really focused on the Italian-Jewish experience of people born in the 40s and 50s who went to Bronx High School of Science and who lived in Riverdale or the south Bronx... It wasn't my book to write, but I would have preferred a more expansive starting point across the borough... There were some outside of that start, but I would have preferred more...

The audio version of the book was a bit confusing in the early chapters. The voices were great, but there was no introduction to who was reading the chapters... Alan Alda was great and very distinctive and familiar, but other than Regis and Robert Klein, I never knew "who" was talking... I eventually figured out that if it were a male story, and not Alan Alda, it was the actual person from the pages of the book.. Female wise, I couldn't really tell, and just learned to accept I wouldn't know who was speaking.

Bottom line, its definitely a book worth picking up, but I think I would prefer the paper/Kindle version over the audible version...

I loved every minute of this and was sad when it came to an end!

Wonderful stories from mostly a Jewish kids perspective. Having grown-up in the Bronx myself, the stories gave me insights into their Bronx that was similar yet also very distinct from my hard years there. Listening to these stories reminded of the good times that were had and possible if you were born in the right neighborhood at the right time.

Good 1st hand memories by those who lived it

I recommend this book to anyone who lived in the Bronx, or had friends and relatives who lived there. The narration covers the periods by decades which means it reflects the changes over the years as well. Some narrators are well-known such as Regis Philbin and others are not. What they share in common is their life growing up in the Bronx. I did not grow up there, but nearby in Southern Westchester County. My Greek immigrant parents had many friends who lived there and we visited a lot. There's a lot of interesting information about the Bronx to be learned from these enjoyable and informative memories.

There were a number of narrators, one for each decade and as one might expect some were better than others.

I grew up in the Bronx between 1944 & 1967. I enjoyed listening to stories about my contemporaries. I was hoping to learn more about the social/economic changes that took place after I moved out. The book covered personal stories but did not talk about the cultural changes between 1968 and now. It was still a pretty interesting chronology.