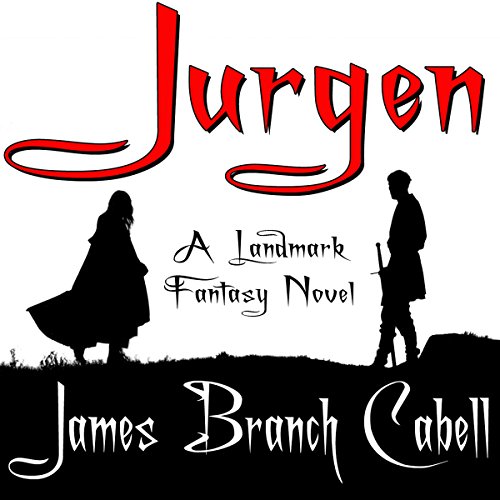 By: James Branch Cabell
Narrated by: Robert Blumenfeld
Try for $0.00

Award-winning author, narrator, and screenwriter Neil Gaiman personally selected this book, and, using the tools of the Audiobook Creation Exchange (ACX), cast the narrator and produced this work for his audiobook label, Neil Gaiman Presents.

A few words from Neil on Jurgen: Jurgen may be the most famous of James Branch Cabell’s books: It was certainly the one that put him on the map, when, in January 1920, the New York Society for the Prevention of Vice took his publisher to court for violating New York’s anti-obscenity law. Suddenly, Cabell went from an admired but semi-obscure author of literary satiric fantasy, to the guy everyone was reading because he was censored.

James Branch Cabell's career was short-lived - his works fit neatly within the 1920s literary escapist culture and then quickly declined in popularity as the author veered away from the fantasy niche. In his heyday, Cabell garnered praise from several of his contemporaries such as H. L. Mencken and Sinclair Lewis. Lewis even acknowledged Cabell's successful Jurgen in his 1930 Nobel Prize address. Jurgen is certainly Cabell's most famous novel, published in 1919, and it tells the story of a middle-aged man on a journey through fantastic realms, where he meets and seduces beautiful women of fiction and myth - including the Devil's wife. The book garnered attention as it was charged with obscenity in a case that reached the New York Supreme Court. Cabell and his publisher won the case, and the author was deemed a literary avant garde, who tested conventional social boundaries and opposed the forces of puritanical repression.

To hear more from Neil Gaiman on Jurgen, click here, or listen to the introduction at the beginning of the book itself.

What listeners say about Jurgen

This is an interesting story both in and of itself and because of the history of the publication of the novel and the controversy that it caused. It is funny and irreverent and full of sexual double entendre and pretty racy stuff for 1920. I would recommend this audio book even thought the narrator was not really the best.

What aspect of Robert Blumenfeld’s performance would you have changed?

This is a tough dialogue to read... no argument, and Mr. Blumenfeld breezed through the French and Latin and German place names and references without missing a beat... however I kept waiting for him to get the rhythm of the characters and he never really did. I often had a hard time telling the transition from one character to another and he really wasn't a smooth reader. He injected pauses in the middle of sentences and didn't seem as I said to get the rhythm of the characters.

If you could sum up Jurgen in three words, what would they be?

I loved how irreverently Cabell treated everything and everyone- making the holy profane and turning the profane sacred. With wit, he brutalized the Classics, the value of sexual conquest, high society, the virtues of democracy itself, and, as only a rare genius could- he brutalized himself most of all. He invited the listener to be part of the joke and fall in love with a truly epic hero that is actually a pudgy scheming pawn broker. The story revolves around his journey to retrieve his wife whom he fears "has been carried off by a devil, the poor fellow."

Which character – as performed by Robert Blumenfeld – was your favorite?

For I am Jurgen, and it is the manly thing to do...

whimsical prose and a perfect performer

Would you listen to Jurgen again? Why?

this is a book which repays rereading. The language, the plotting and the mischievous double entendre may have been compromising in 1910, but today it is refreshing and amusing with a delicate and wicked sense of humour - his name was Jurgen but what his wife called him "was often much worse than that"

What other book might you compare Jurgen to and why?

None, unless by Cabell. His Storisende series continually offers the sense of humour and mischief found here. Jurgen is the most accessible of the stories and perhaps the wittiest. after all, noone knows what happens in the dark.

too good to miss, it is to be hoped that the rest of these wonderful books will be available on Audible, and with the same narrator.l especially look forward to the Cream of the Jest.

This was mostly silly... and a little profound

If you're reading this book because you're hoping to read something 'edgy' or you heard that this book was controversial... well, probably you will be disappointed. Unless you're scandalized by penis metaphors. I would hope that you wouldn't read a book purely for it's controversiality though...

Otherwise, I think Jurgen was a pretty insightful and blunt exploration into what I guess I'd call typical daydreaming themes (If I could go back in time.... if I could have any partner I wanted... etc). I don't know that it's possible to debunk these daydreams entirely - in particular I'm not sure I buy the idea that "doing it all over again" wouldn't make me happier. But regardless, it's an interesting thought.

I wasn't entirely sure what I was getting into when I picked this book up. I was curious because it was from the NGP line of audiobooks, and also since it was written in 1919 and caused enough controversy to transform it into popular fiction.

It's a kind of wish-fulfillment comical fantasy -- Jurgen is a pawn broker who gets swept away to far away lands. There, he gets to sleep with vampires, demons, nymphs, Princess Guinevere, and the Lady of the Lake (but NOT Helen of Troy). As Jurgen is so fond of saying, he will try any drink once. When the lights go out, the women love to tell Jurgen how mighty and magnificent his sword is. Or his lance. Also, his scepter, staff, and whatever other double entendres Cabell could manage.

Thanks to Robert Blumenfeld's narration, this is often pretty amusing. There's a scene where an enchantress uses her thumb and forefingers to make a diamond shape for an old mystical ritual, and then requires Jurgen to insert his lance inside them, which made me howl with laughter. Blumenfeld tells it all with a dry expression and wit, playing everything with a straight face, which really suits the text. In the end, there's also some heart and melancholy to go with all the dick jokes.

I don't know if it's a novel I'll come back to relisten to, but I enjoyed this time capsule of a sex comedy and seeing what all the scandal and outrage was about 100 years ago.

It largely depends on the friend--while I think this would make one of my acquaintances doing a DPhil in Medieval Literature squeal with glee, I'm not sure it's for everyone. If you have an appreciation for grail literature or classical works then this will probably suit you quite well.

He does have a nice (errr perhaps naughty) whit that still translates quite well to a modern audience. However, bits of it seem a little bit stilted and I sometime found myself losing patience with the plot.

I thought the performance was a little bit too dry. I like the reader's voice, but thought it was more soothing than entertaining, and this does not help you pay attention when the plot is lagging a bit

Yes definitely, I think I'd probably enjoy the film more.

One of my favourite books of all time, perfectly read. So fun. So clever. Thank you.