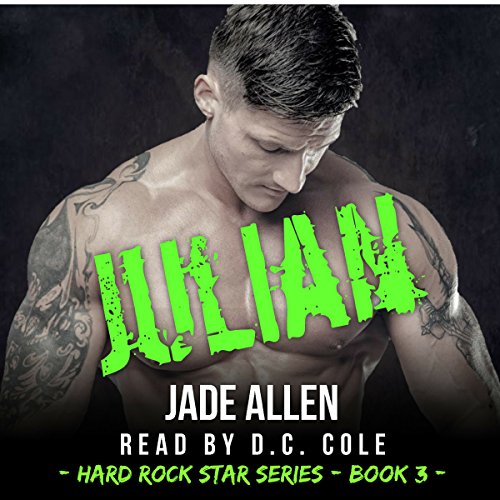 I'm the lead guitarist in one of the most successful bands in the Miami scene named Molly Riot. Our label is trying to convince us to tour with Juniper Woolf, a rival band that's fronted by an attention-seeking brat named Fran Chambers.

When my band mates finally convinced me to sign off on the tour, I thought there was no way that I'd ever get along with Fran...that is, until I started spending time alone with her on the tour bus.

You know, I've gotta say, no woman has ever had such a pull on me. We can't keep our hands off each other, but the problem is, we can't let anyone else in either of our bands know about our little tryst. If the press were to get a hold of this, we'd all have a problem.

Do you have any idea how hard it is to hook up on a tour bus without anyone else knowing about it? I'll tell you one thing, if the two of us can keep this a secret, we'll each deserve an Oscar.

Warning! This rock star romance audiobook is intended for listeners age 18 and over. It contains mature situations and language that may be objectionable to some listeners.

What listeners say about Julian

This series is an enigma for me. It's so not what I'm normally into in so many ways. Sure, I'll read or listen to the occasional rocker story. As long as it doesn't get too deep into the life, I can even enjoy it. But, I am hooked on this series! And, I couldn't figure out why! Most short stories leave me feeling like they weren't quite complete, or something was rushed or missing. But, not in this case. Rockers? Eh. Smoking of any kind, even reading about it, sends me for my allergy meds. Oh the sinus headaches, migraines, itchy, watery, and painful eyes, and eventual overall body issues! The only time in my life I ever had pneumonia was when my parents went on vacation and left me with an aunt who smoked. Thought I was going to die. But, I digress.

At first I tried to decide whether it was Jade Allen's writing or D.C. Cole's narration. Now, I'm convinced it's both. It's that magic that happens when the perfect narrator and author produce the perfect audio. Jade Allen writes a heck of a story. So, it doesn't obviously matter what she's writing about. She pulls you in even if it's not necessarily your normal genre or sub genre. Her stories are full of "real" characters and you feel like a fly on the wall. And, I think Julian may be my favorite so far. The characters to me had even more depth. I loved the way the slight conflict between Julian and Frannie played out. They both had valid points, or realistic reactions to what their band members might feel. And, D.C. Cole is just exceptional. You aren't listening to a book, you are actually seeing these characters, these people, and you are in their heads. Whether you like them, don't like them, it doesn't matter. You're watching this whole thing play out like a movie.

Just very well done all the way around. I don't know what to say besides, I'm just a fan. I can't wait to see what happens next.

book 3, did not disappoint!

this is the 3rd book of this series and I have now listened to all 3 of them. I have enjoyed them all, but i think this one was my favorite. though this is a series, each book can be read as a standalone book with out you getting lost.
Julian has been my Fav band mate so far, and I would totally date him. there are also some great sex in this book!
the narrator did an excellent job bringing this story to life! I am a fan of Mr.Cole he has a great voice.

I was gratefully provided this audiobook at no charge by the author, publisher and/or narrator for an unbiased review via Audio Boom..

This audiobook was given by the author, narrator, or publisher at no cost in exchange for an unbiased review via Audiobook Boom.
D. C. Cole gave Julian a perfect "Don't give a damn" voice that Julian was immediately different from any other bad boy I've listened to. The story was different with "rock star digs rock star" instead of uninterested girl. All in all, a very enjoyable experience!

If you could sum up Julian in three words, what would they be?

Julian and Fran's story says you can have your dessert and enjoy eating it too. 😉

Which character – as performed by D. C. Cole – was your favorite?

D. C. Cole does amazing with the voices of the band. His voice does interesting things to story line to bring the characters to life.

Yes, and did several times.

She's not my Yoko, she's my Meg White

This is the first book by Jade Allen that I have read/listened to. As this is book 3 in the series, I got a little lost at times when it came to certain characters back stories but was still able to follow this one. The characters were interesting and well written and anyone that has read the first two books will love the latest installment. Overall I really enjoyed this book and will look into getting the first two books and then reading this one again so I can get the full effect of the series.

The series continues to deliver!

I just love this series. Julian, the lead guitar for Molly Riot is not happy with the band's current tour with Juniper Wolf. He has had an ongoing public fight with their lead singer, Fran. Once on the tour bus, things begin to change, and as they get to know each other, what's a little non-committed sex going to hurt? This relationship is fun, sexy and the scenes are HOT! Listening to these books, I have loved how even though the band has grown up together, each has their own identity and issues to overcome. While short, the depth of the characters is evident and you really get in their heads.

DC Cole again, brings this story to life. He is the perfect narrator for Molly Riot with his deep, gravelly voice.

I am looking forward to book 4, can't wait!

--I was given a copy of this audiobook in exchange for an honest review.

Jules hates Fran. He thinks she is an attention seeker and does not want to go on tour with the band. He thinks she hates him too but really she doesn't and Jules realizes shes not as bad as he first thought. They start to get close but they keep it a secret from both of their bands. I really liked Jules and Fran together. I am such a fan of enemies to lovers and this one did it perfectly. This was a short listen but it didn't feel like it. The narrator did a great job and Jade Allen really can write a hot book. Definitely listen to this one.

I had so much fun listening to this audiobook, this series just gets better and better! Lead Guitarist Julian is against touring with Juniper Woolf because he can't stand the lead singer, Fran Chambers. He soon realizes that not liking her because she threw glitter at him during a show just sounds petty. The more he gets to know her the more he is intrigued by her and appreciates her talent. Fran is attracted to Julian as well and they soon can't fight their chemistry. That chemistry translates into making actual music together as well. They get each other musically and personally. But he is so close with his band mates, he doesn't want them thinking he will leave them for Fran, but he needs her to satisfy a part of him he has kept suppressed for far too long. This just brings on more complications than Julian wants or need, but is he willing to lose Fran because of it? I thought this book was funny, engaging and so sexy. The quick story had a depth with the character conflicts, resolutions, fun banter, and sensual passion that was totally satisfying. The narrator did a great job pulling me in and making me feel like I was really there. This is the 3rd book in the series but can be enjoyed as a standalone. If you like fast paced, sexy, and funny stories, you should definitely give this a listen!

I was given this book via audiobook boom in exchange for an unbiased review. The narrator did Julian's voice very well. I am not sure about the other voices. This is the first book I have read about Molly Riot and I liked it. The story was well written and the concept presented was nice. Fran and Julian's story was good. I am glad that they got together and also the collaboration on the song was also good.

Would you try another book from Jade Allen and/or D. C. Cole?

I would try a book from Jade Allen but I would read it rather than listen to the audio book.
I had a hard time with the narration by D.C. Cole.

What was one of the most memorable moments of Julian?

Julian was very self absorbed for a good amount of the story, and even when he wasn't self absorbed in the later chapters it still somehow was not about others or how his relationship progressed with them. There wasn't really a stand out point that was memorable he seemed kind of indifferent or just 'whatever' for most of the story

Slow, drawn out, exaggerated in a boring way. The narration sounded like it was being heard in slow motion, I had to check multiple times to confirm my speed was set correctly. Even tried to speed the speed up to see if it helped and it was still over drawled, the words sounded too exaggerated and lengthy like- pppllleeeaaassseeee ttaallllkkkk fffaasssttteerrr. It made it hard to really get engrossed in the story.

If a lot of other angsty plot twist were added maybe, as it is I would wait for video release to watch.

The premise for the story was great, but the book lacked angst or plot twist. It was more like two people who hook up that just decide to stay together and that's all. It was sweet in a way but I never felt a true intense emotion of love, list, or want toward each other from the main characters. Fran and Julien lacked the steam or romance it just felt like "so we're together?" "Yeah I guess." The drawnnout narration made the lack of zest more noticeable and unemotional too. If it had a different narrator I may feel differently but I don't think so. It felt very blasè and the narration was the final nail in its coffin. I was gifted for free this audiobook from the publisher via audiobook boom for my unbiased review.