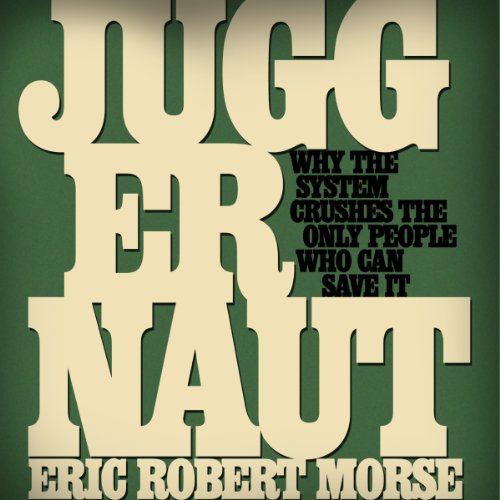 Why the System Crushes the Only People Who Can Save It
By: Eric Robert Morse
Narrated by: Fred Filbrich
Length: 19 hrs and 23 mins
Categories: Business, Commerce & Economy
4.5 out of 5 stars 4.3 (3 ratings)

By now, everyone recognizes the severity of the 2007-08 financial crisis. But, to many Americans, the bailouts, stimulus packages, and regulatory schemes aimed at solving the problem seemed to merely pull the economy further into the mire of bureaucracy, party politics, and unsustainable debt that led to the crisis in the first place. Only the bankers and officials who caused the problem were in a position to solve it, and so fixing the system necessarily meant becoming part of it - and thus making it even harder to fix. This is the crux of the Juggernaut.

A sprawling, uncontrollable system that only grows larger and more berserk the more we try to quell it, the Juggernaut has become a way of life. It is not, as many would suggest, a product of the last 10 or even 30 years. Rather, it is inherent in the system itself, with roots that reach as far back as Columbus and the dawn of modern times.

In this stunning new story of political economy, author Eric Robert Morse examines why the modern system has become so unwieldy and explains what must be done to correct it. His astute analysis and fascinating storytelling take readers on an epic journey, from the dawn of free-market capitalism during the age of exploration, through the industrial revolution and Adam Smith, to the rise of Keynesianism and the dominance of the welfare state.

Drawing from all corners of political, social, and economic study, including specialism and the division of labor, competition and game theory, and statism and public choice theory, Morse weaves together a groundbreaking economic theory, which promises to shake up the current political discourse and usher in a new era of cooperation and prosperity.